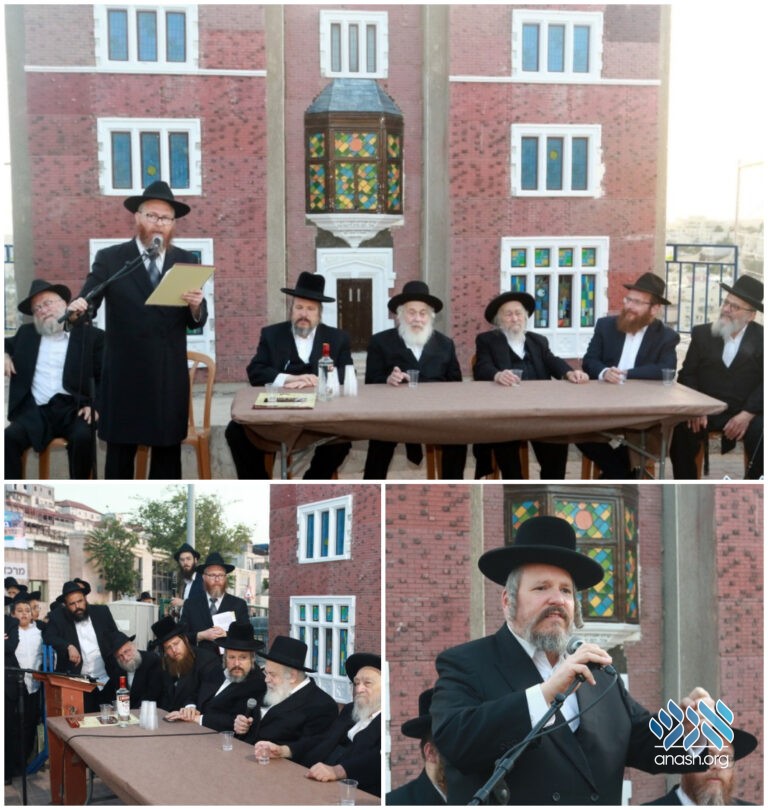 On Gimmel Tammuz, the mayor of Beitar Illit, Rabbi Meir Rubinstein, dedicated a square in the heart of the city in honour of the Rebbe and his shluchim. The square was named “Kikar HaShluchim,” and features a model of 770.

About two years ago, during the Kinus Hashluchim banquet in New York, the mayor of Beitar Illit, Rabbi Meir Rubinstein was amazed by the tremendous work of the shluchim and decided that he wanted to honor them with the construction of a unique exhibit in his city. This past Gimmel Tammuz, the construction was completed and Kikar HaShluchim was inaugurated with a special event.

Rabbi Chaim Greenberg, director of the Chabad Center in the city, Heichal Menachem, opened the event by thanking the mayor, Rabbi Rubinstein, for initiating this beautiful project.

“When the Rebbe asked for Simchas Beis Hashoeva to take place on the city streets, he taught that by dancing in the streets we turn the public domain into a private domain, meaning the domain of the Yochid of the world, Hashem. Today the public property of Beitar Illit is demonstrating that it is a reshus haYochid, Hashem’s domain.

The mayor, Rabbi Meir Rubinstein, shared words of praise and appreciation for the shluchim. He noted that every Jew is secure in the knowledge that if he ever needs anything, whether related to yiddishkeit or not, the shluchim will always be there for him, anywhere in the world.

“Our city is privileged to boast a community of Chabad chassidim. Even in a city already full of Torah and chassidus, they do much to add even more, all with ahavas yisroel. This is due to the power of the Mishaleiach, the Rebbe.” He thanked shliach Rabbi Moshe Kahana for his participation, and the director of the Chabad House, Rabbi Yaakov Torenheim.

The rabbi of the Chabad community, Rabbi Asher Lemil Cohen said, “On this day of the Rebbe’s Yom Hilula, we see the tremendous influence of the Rebbe on tens of thousands of Jews who are inspired to keep Torah and Mitzvos. Certainly this model of 770, which honors the shluchim all over the world, brings honor to our city.”

The secretary of the Chabad Rabbinical Council in Israel, Rabbi Yitzchak Yehuda Yeruslavsky, praised the mayor for his work to benefit the Chabad community in Beitar Illit. “The Mayor is very involved in every detail, and we bless him and thank him for his concern for Chabad chassidim in our city and for his appreciation and esteem of Chabad shluchim everywhere.”