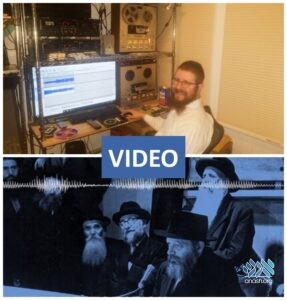 Take a look at Ashreinu, as it embarks on a major undertaking to restore recordings of the entire first two decades of the Rebbe’s leadership.

In the emerging field of audio/video restoration, few organizations can match the output of Jewish Educational Media’s archive. With 40 years of recordings of the Rebbe collected and documented, a priceless collection of audio material has thankfully been preserved, plucked from the dustbin of history.

“In the years following Gimmel Tamuz,” explained JEM director Rabbi Elkanah Shmotkin, “we recognized the pressing need to house all recorded visual and audio media of the Rebbe in one location.  In addition, the archive would have to be efficiently maintained, to halt the inevitable decay of the magnetic media over time. But the ultimate goal is to assure the material is accessible and utilized.”

Although a large trove would eventually be amassed, restoring the audio tapes and delivering them to the end user proved a challenge. In 2018, JEM launched “Ashreinu,” a web platform to deliver, organize and provide easy access to full audio events with the Rebbe. In the words of content director Rabbi Shneur Itzinger, “The goal was to have the entire existing audio of the Rebbe digitally enhanced and made available on-line.”

With the vast accumulation of original audio recordings over a 20 year period, a huge amount of research and detective work was still needed. “Many recordings from the earlier decades exist, but most were in poor condition, often containing gaps in the audio,” Ashreinu director Rabbi Yisroel Slonim recalled. “Several labor-intensive stages by a dedicated staff committed to completing a full set of the Rebbe’s audio recordings are required for each farbrengen.”

The first step deals with the actual physical recordings. Archivists rabbis Dovid Leib Lepkivker and Motti Hazan catalogue the items, identifying the time, date and source, ensuring the collections are well organized. As the recordings are often aged and created on antiquated devices, technician Rabbi Zalman Wilhelm will carefully transfer the reels so that no data is lost, even baking the tapes when needed.

At that point, editor Yisrolik Shemtov will thoroughly analyze each recording, comparing and contrasting for best sound quality and speed. Using advanced audio recognition programs, background noise is eliminated and the sound is equalized allowing for the best possible listening experience.

The joy in hearing the Rebbe’s original words in such breathtaking clarity cannot be overstated. The fact that thousands of users spend hours on the app each week is the ultimate testament to that.

Over an extended period, technology director Yaakov Rozenblat and the development team worked to solve a stubborn problem: How to provide easy navigation and an intuitive interface on thousands of audio files, presenting events that are, at times, up to six hours long. After many months of trial and error and dozens of iterations, the team came up with the now-ubiquitous navigation system. “Good design makes you think about the product, not the platform. Ashreinu provides the ability to experience these timeless events with the Rebbe in incredibly intuitive fashion. The result has been a renewed focus on the content, overcoming previous browsing difficulties with searching the material.”

As the success of this historical restoration grows, Ashreinu has embarked on a major undertaking to complete the entire first two decades of the Rebbe’s leadership. A total of 46 farbrengens remain, with the hope of completing them in the near future.

To help make these treasures available to the world, the team has begun a fundraising campaign to expedite the process. The cost of restoration is $950 per farbrengen. Generous donors have already pledged to cover half that amount.

Ashreinu is now turning to the thousands who have benefited from the app and the site. Help them reach their goal of bringing the Rebbe’s timeless words to new audiences, in a voice heard loud and clear.

To contribute to the campaign, please visit restore.ashreinu.app.