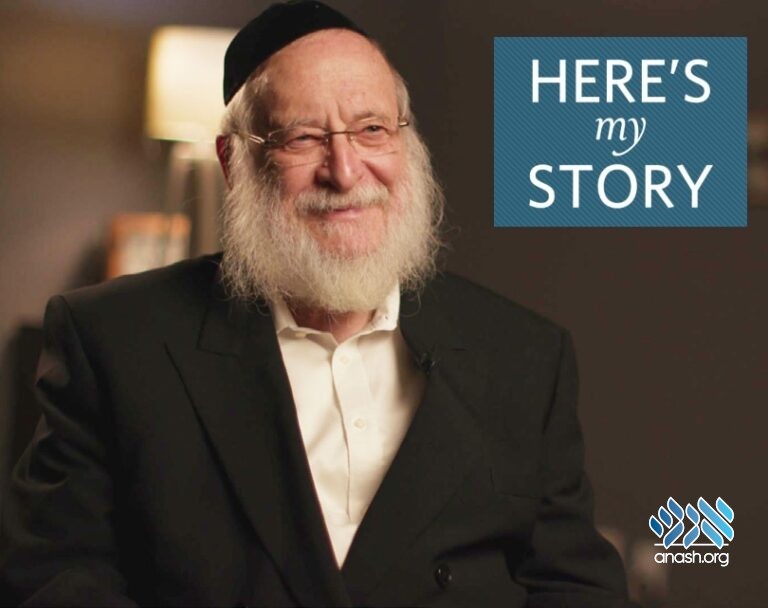 Rabbi Yossi Chitrik, administrator of the Beis Chana seminary in Tzfat, relates memories of when he was sent on shlichus to Australia, and why the Rebbe sent newspaper clippings to his mother.

Rabbi Yossi Chitrik is the administrator of the Beis Chana seminary in Tzfat, Israel. He was interviewed in the My Encounter studio in November of 2021.

I was born in Crown Heights in 1952, and met the Rebbe for the first time eight days later; my parents invited him to my brit and honored him to be sandek – the one who holds the baby during the ceremony. During that period, the Rebbe only acted as sandek for three babies, and I had the privilege of being the last of the three.

At the ceremony, the Rebbe delivered a talk, and gave my father five dollars towards my future yeshivah tuition. This was, he explained, a custom he had learned from the Previous Rebbe, whom I was named after.

I am told that I cried a lot. Most babies cry at a brit, of course, but they tend to calm down after a few moments, but I didn’t stop. When my great-uncle told this to the Rebbe, he remarked that it was a good sign: When the Previous Rebbe had also cried as a baby at his brit, his grandfather, the Rebbe Maharash, declared that he would go on to teach people Chasidut. So that is something I’m still trying to fulfill, as much as I can.

A little over twenty years later, in 1973, I was studying at the yeshivah in 770, when I was among six yeshivah students who were chosen to go to Australia. We were the fourth group of student-emissaries sent to the Yeshiva Gedolah in Melbourne, and teaching Chasidut to the other students and community members was going to be a major part of our job.

Before heading out, we had an audience with the Rebbe. The way it worked was that each group would leave around Passover time, and would return two years later. So, when we walked into the Rebbe’s room, we went in along with the group that had just come back. The six of us who were going stood on the left side of the room, and the six who were returning stood on the right side near the door. Rabbi Hodakov, the Rebbe’s secretary, was standing next to him.

“This is everyone?” the Rebbe asked.

“These are the ones who came back and these are going out,” Rabbi Hodakov replied.

“This is everyone?” he asked again.

Rabbi Hodakov repeated himself, but the Rebbe clarified “Where are the previous groups?”

The first and second groups had already been back for a few years, but many of them were still studying in 770 and the Rebbe wanted them to be present as well. “Should I go call them?” Rabbi Hodakov asked.

Rabbi Hodakov ran out and we started to hear hollering coming from outside: Where is Kaplan? Minkowitz! Morosow!

We stood there frozen for about five or ten uncomfortable minutes, while the Rebbe stayed seated, just looking down at his desk. Finally, they all came in, led by Rabbi Hodakov, and stood in the back of the room. Then the Rebbe began to recite a chasidic discourse.

My father was a businessman who often traveled to the Far East and would bring back different gadgets every time he went. One of the gadgets he brought me was a pocket-size tape recorder, which was unheard of at the time. Cassettes hadn’t yet become standardized, so it only had one cassette, which I would constantly erase and reuse.

I had this recorder with me, and I was ready to use it as soon as the Rebbe started speaking. In those machines, you actually had to simultaneously press both the “play” and “record” buttons, in order to record anything. So, by Murphy’s law, when I reached for the buttons, I accidentally pressed play before record, and started to hear whatever noise had been recorded on there before. Someone standing behind me gave me a friendly punch – as if I hadn’t noticed that I was making noise.

Anyway, I immediately closed it and pressed record again – this time properly. The discourse the Rebbe delivered to us then has since been printed, thanks to that recording.

After the discourse, the Rebbe told us that wherever the Previous Rebbe went, he would always visit the local rabbi, and suggested that we do the same.

We traveled a roundabout route to Australia – it was after Passover when the forty-nine days of the Omer are counted, and we didn’t want to miss a day by crossing the international dateline, so we flew east, across the Atlantic rather than the shorter route, westward. In each place that we stopped – in Europe, Israel and Singapore – we were to visit the local rabbi.

The Rebbe gave us each a copy of the Tanya, the foundational work of Chabad philosophy, as well as money to give to charity in the places we visited: British pounds for England, American dollars for Israel, and Australian pounds for Australia.

The two years we were stationed in Australia were beautiful, but long years. I thank the Rebbe for giving me that opportunity to spend that time totally involved with the yeshivah students; they were my best years. But we were also totally detached from everyone we knew. There were no faxes, no WhatsApps, and no emails. My brother would mail me a daily letter about what was happening in 770, and over that period, I think I got eight letters from the Rebbe. He sent similar letters to each of the six of us, individually.

In the Australian summer of 1974 (which was winter in the US), I traveled together with Rabbi Benzion Milecki to the cities of Adelaide and Perth, to find Jewish people, and to strengthen the existing Jewish communities in those places.

We sent a report of our activities to the Rebbe, and included some clippings from local newspapers that had run stories on what we were doing.  When I finally returned home from Australia, I saw that my mother had those clippings from our visit to Adelaide.

“How did you get that?” I asked her. I had never sent it to her.

It turned out that Rabbi Binyomin Klein, the Rebbe’s secretary, had knocked on my mother’s door one day with the newspaper clippings. “The Rebbe said to bring these to the parents.”

The Rebbe made sure that my parents could have some nachas from me, figuring that I hadn’t been thoughtful enough to send the clippings to them. He knew who I was.

When we finally returned, it was Passover time again. At the end of the holiday, I joined the line to receive some wine from the Rebbe’s cup.

As I was waiting, I began thinking about those two long years. A little voice inside me said: “You know, those were two years of hard work. After giving up so much for the Rebbe, I really should be getting some appreciation.”

When I came closer to the Rebbe, he picked up a whole bottle of wine – in addition to pouring wine from his cup, the Rebbe would also give small bottles of wine to certain individuals – and handed it to me. “This is for your students,” he said.

I realized that the Rebbe was telling me something. I hadn’t gone to Australia for myself, but for a mission. “Stop thinking about all the work you did in Australia,” I felt he was saying to me. “Think about your students!”