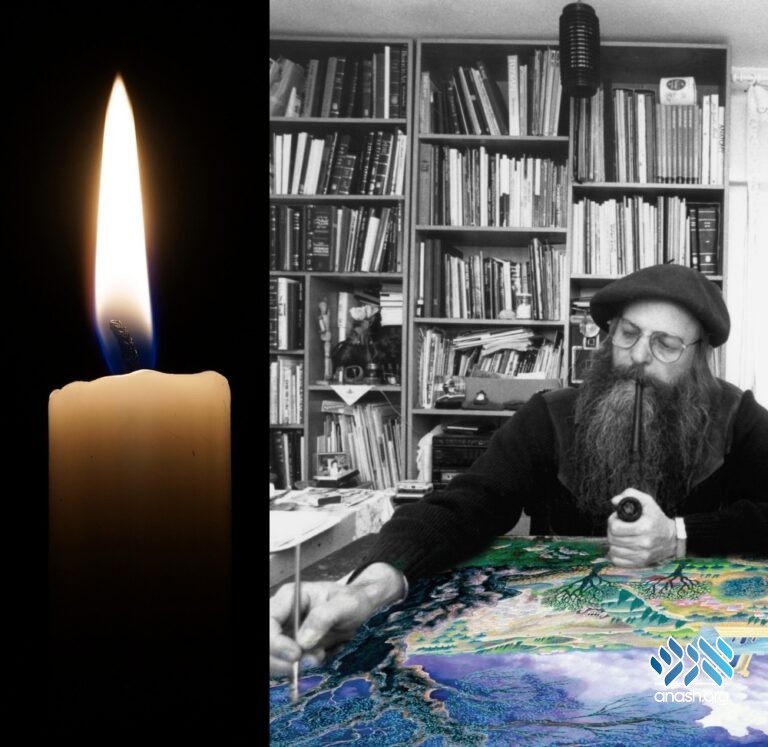 R’ Baruch Nachshon, a renowned artist who merited that the Rebbe visited his art exhibition in 770 and commented on his art, and one of the pioneers of the Jewish community in Chevron, passed away on Monday, 7 Tishrei.

R’ Baruch Nachshon, a renowned artist who merited that the Rebbe visited his art exhibition in 770 and commented on his art, and one of the pioneers of the Jewish community in Chevron, passed away on Monday, 7 Tishrei, 5782.

Born to Menachem and Leah Nachshon on 15 Av, 1939, Nachshon was raised religiously in Haifa.

He said that he never fit into the crowd, and it was a kind preschool teacher who gave him space and let him draw. “That way she got silence in the kindergarten,” he recalled, “and everything continued smoothly [in the class].”

He said that school did not interest him, “I felt like I don’t have who to talk with, and the most interesting thing in my life is the ceiling that is above my head.”

As a teenager he began to study at the Chabad yeshiva in Lod, where he became close to the famed mashpia Rabbi Shlomo Chaim Kesselman. He said that at the yeshivah he was taken by its melodies, and the stories the chasidim retold from the Soviet Union. “I felt a strong belonging to these people.”

During his military service, Nachshon herded flocks for the IDF, an experience that imbued in him a love and appreciation for nature that figures prominently in his work. Upon completing his military service the young artist was torn between the temptation to travel to Paris, then the cultural center of the art world, and his deep love of the land of Israel, the spiritual center of the Jewish world. Opting to stay in Israel, Nachshon studied under Shlomo Nerani, the only student of  French artist and Post-Impressionist painter Paul Cézanne, with whom he had enjoyed a deep friendship extending back to his childhood. Nachshon, whom Nerani viewed as his spiritual heir, was the only one of his students allowed to see the master at work.

Mr. Nachshon arrived in the United States from Israel in 1963 to pursue his education in art. At the age of 19, during a difficult period, he had become attracted to the teachings of Chassidus and started a correspondence with the Rebbe. Now the 24-year-old artist and his wife came to meet the Rebbe for the first time.

In that meeting, the Rebbe guided Mr. Nachshon to work on creating “kosher art.” When he agreed, the Rebbe offered to fund his studies at the School of Visual Arts in New York City. The Rebbe also paid for the young couple’s monthly rent and other expenses.

Mr. Nachshon went on to create a unique genre, depicting mystical concepts and fantastical scenery. “I don’t copy the styles of the world,” the artist says. “For me, all the inspiration comes from the point of inspiration—heaven.”

A few months after the Six-Day War, Nachshon, together with his wife and children, joined six others families in reestablishing the Jewish community in Chevron. The Israeli government did not look kindly at the group, and it took a years-long struggle to receive official recognition and protection from the government.

Only four months later, the young boy passed away. The boy’s mother, Sarah, was determined to bury her son in Chevron’s Jewish cemetery, which had been desecrated during the 1929 Chevron massacre. The funeral procession set out, but Shimon Peres, the-then defense minister, gave an order that the procession be stopped. Holding her son in her arms, Sara Nachshon declared “My son was born here, his bris was held here despite you forbidding it and he will be buried here. If you will not let me ride in the car, I will go on foot.” Eventually, the commander gave in, and young Avraham Yedidiah was the first Jew to be buried in Chevron since 1929. The two events were major milestones in the struggle for Jewish presence in Chevron, eventually leading to a full restoration of the cemetery and the removal of the restrictions on Jewish visits to Me’aras Hamechpela.

Living in Chevron, Mr. Nachshon led a secluded life, rarely venturing out of his studio and study. His financial situation began to deteriorate.

After a 1977 exhibit in London, the artist traveled to New York and met with the Rebbe again. He asked if the Rebbe would like to see some of his art. Wanting to encourage people to purchase the art, the Rebbe offered to make an exhibit in one of the wings at Lubavitch world headquarters.

The Rebbe was the first to visit the exhibit. Studying each piece, the Rebbe offered a suggestion: “You depict the soul of Judaism well. However, Judaism is also about the body. The body is central to Jewish observance. In the future, try to express the actions of our forefathers—Jewish observance—so that the general public will have an understanding and feel a connection to the art.”

After the exhibit, the Rebbe called Mr. Nachshon into his private study and asked if there had been any sales. Very few, the artist said. “When the people heard the price of the art, they fainted.”

The Rebbe smiled at this and told Mr. Nachshon to sell to healthy people. In addition, he advised him to make an effort to print lithographs, so that his art would be affordable for every family.

Over the years, the Rebbe advised the editors of various magazines to employ Mr. Nachshon to create their cover art.

He painted hundreds of pieces of art, which adorn many homes, art galleries, and books. He thanked G-d for giving him his talent and the possibility to express his soul.

“Give me inspiration to reveal your presence,” he once wrote, “even in the darkest places, because everything is from you. … There is nothing else, no words in our mouths sufficient to thank you for having created us.”