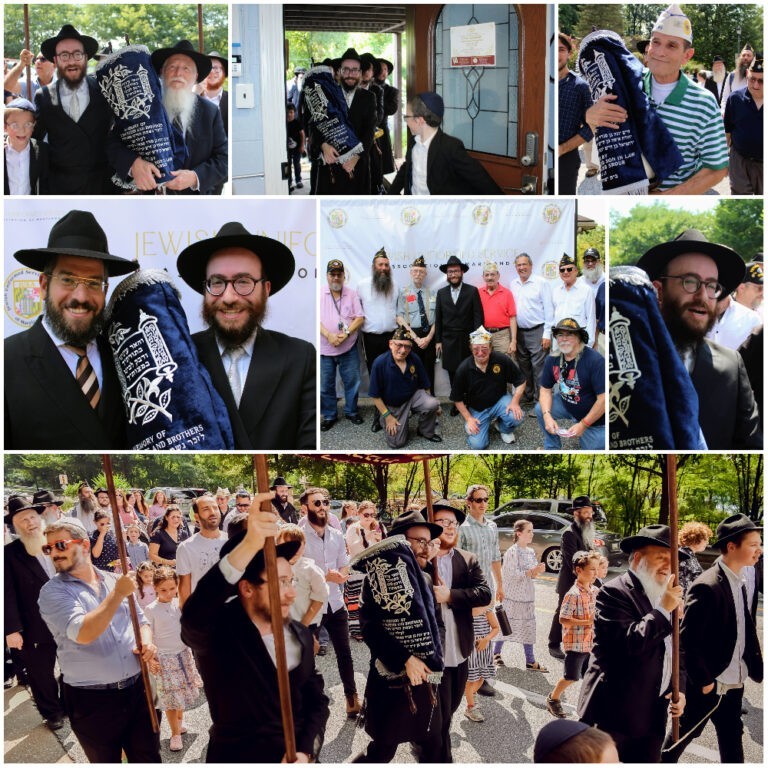 The Jewish Uniformed Service Association of Maryland-Chabad held a hachnosas Sefer Torah to celebrate WWII veteran Ernie Fass. The event was attended by several other Jewish veterans and public officials.

A memorable and unique hachnosas Sefer Torah parade and celebration occurred in Baltimore, Maryland. The Jewish Uniformed Service Association of Maryland-Chabad (JUSA), under the directorship of Shluchim Rabbi Chesky and Chani Tenenbaum, welcomed the Veterans Torah with a festive parade headed from Blue Stone Park to the headquarters of JUSA.  The Torah was dedicated in memory of World War II Veteran Ernie and his wife Beatrice Fass to the JUSA Center by their daughter Regina and her husband Habib Srour and coordinated through the Torah Gemach and Rabbi Bentzion Chanowitz.

Ernie Fass enlisted in the Navy at 18 and was deployed on The Destroyer Escort fighting against Japan in WWII. Due to his bravery, he was decorated with a Bronze Star for the Empire Raids and Bombardment of July-August 1945.  Together with his wife Beatrice he built a warm and welcoming home, raising 6 children, and hosting guests. In the 1960s he became a patrolman for the NYPD Social Service Dept, working his way up to Lieutenant. Their daughter Regina sought an opportunity to commemorate their special parents. Upon hearing about JUSA and the support that they provide Veterans and men and women in uniform on a regular basis, they were excited to designate the organization as the recipient of this special Torah.

To welcome the Veteran Sefer Torah, many Veterans, whose military careers expand over several decades joined in the festivities. They held their new Torah close while parading underneath a Chupa through Baltimore County streets.

Over 250 people attended as the Torah was celebrated with live music and dancing. The parade was led by the Baltimore County Police Department and two vintage Maryland State Police cars. Once reaching the JUSA Center, a special Salute was awarded to all of the Veterans in attendance, in partnership with the Jewish War Veterans of Maryland. Leading the salute to Veterans were Maryland Secretary of Veterans Affairs, George Owens and Commander of the Jewish War Veterans of Maryland, Erwin Burtnik.