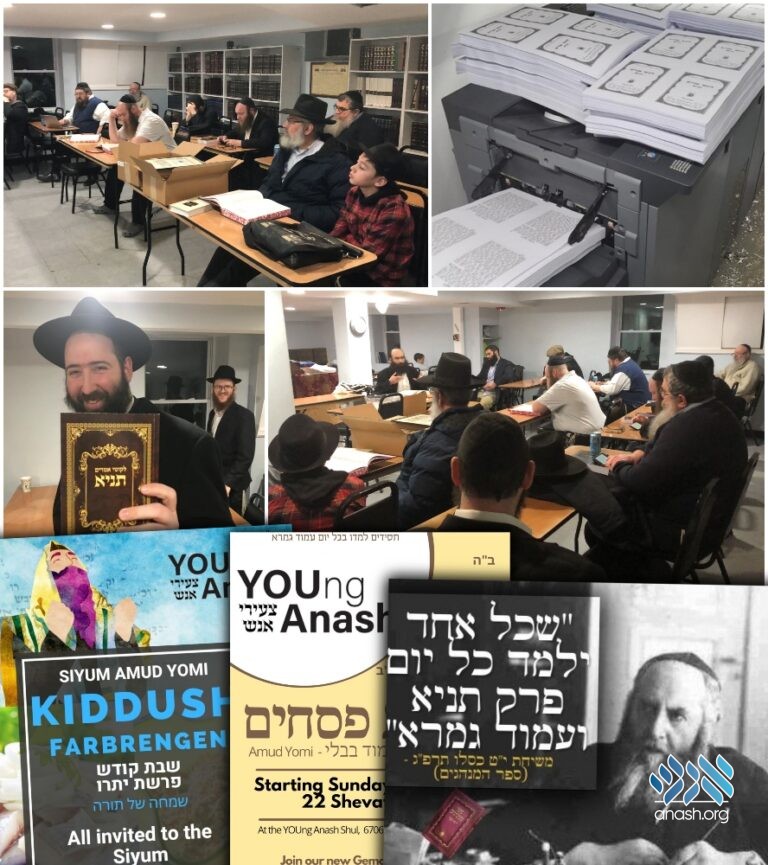 Members of the Young Anash shul of Baltimore marked Chof Bais Shvat by printing a Tanya. They also celebrated a siyum on Masechta Eruvin after learning an omud a day, in accordance with the Frierdiker Rebbe’s request.

Members of the Young Anash shul of Baltimore marked Chof Bais Shvat by printing a Tanya. They also celebrated a siyum on Masechta Eruvin after learning an omud a day, in accordance with the Frierdiker Rebbe’s request.

Eitan Corenblum, member of Young Anash, organized the printing of a Tanya to mark the special day of Chof Bais Shvat. With the participation of the other community members, the new Tanyas were printed by Mendel Rosenblatt, of Speedy Graphic Printing and Signs services.

Another milestone celebrated by Young Anash was a Siyum Masechta by the participants of an Omud Yomi shiur.

During a Simchas Torah farbrengen in Rostov, 5683, the Frierdiker Rebbe requested that every chossid learn an omud of Gemara each day. He reiterated it on Yud Tes Kislev of that same year, just a few months before the Daf HaYomi program started on the first day of Rosh Hashanah 5684.

The members of the Young Anash shul in Baltimore began the shiur three years ago, learning an omud in a half hour each day, from 8:30 to 9:00 pm. They started from the beginning of Shas and with persistent, daily study, they have already concluded Masechtos Brachos, Shabbos and Eruvin. Rabbi Nochum Levin, rav of Young Anash, gives the shiur.

The siyum on Masechet Eruvin was celebrated with a kiddush and farbrengen on Shabbos Parshas Yisro and on Sunday, the shiur participants began earnestly studying Masechta Pesachim.

As they begin a new masechta, Rabbi Levin encouraged more members of anash to join the shiur. “In just 30 minutes daily, you’ll acquire the joy of learning in a friendly and engaging way,” he said.

After learning the daily omud, the shiur participants spend another half hour learning the Rebbe’s ma’amorim. Beginning three years ago with Yud Shvat 5711, by now they have learned each ma’amor that the Rebbe delivered until Shvat 5716.