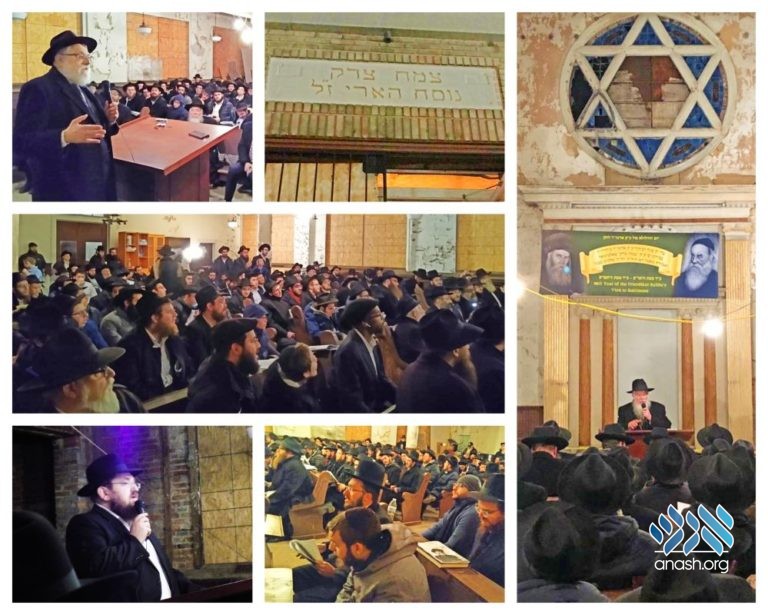 On the 90th anniversary of the Frierdiker Rebbe’s visit to Baltimore’s Tzemach Tzedek shul, anash and shluchim learned the maamar he delivered- at that exact time, in that exact place.

In 5690 (1930), the Frierdieker Rebbe spent a year in America during which he visited several US cities. One of those cities was Baltimore, where he stayed for three weeks, from 12 Teves until 4 Shvat.

On Chof Daled Teves, the Frierdiker Rebbe visited the Tzemach Tzedek Lubavitch shul where he davened maariv and delivered a maamar beginning with the words ‘Yehi Hashem Elokeinu Imonu’.

On Monday evening, 200 Baltimore anash and shluchim gathered in the shul to mark 90 years from the historic event.

The program was the brainchild of Rabbi Zalman Spitezki, who, together with several others in the community, worked tirelessly to pull off the inspiring evening.

“Everyone showed up,” Rabbi Spitezki told Anash.org. “Anash came from different shuls in the city, the bochurim came from the yeshiva – it was a real evening of unity.”

The Tzemach Tzedek shul was established in 1922 by chassidim who had fled Russia for America, and were determined to stay strong in their Yiddishkeit. In 1923, Rabbi Avrohom Eliyohu (Elye) Axelrod arrived in Baltimore, where he served as the shul’s rov until his passing in 1952.

In the 60s and 70s, Baltimore’s Jewish community migrated westward, leaving the crime-ridden downtown area for the safety of nearby suburbs. During that time, the shul was sold to a church r”l, and it remained in their possession for many years. A few years ago, a member of the anash community took the initiative to redeem the shul by purchasing it back. Unfortunately, it was in a terrible state of disrepair.

“The shul has disintegrated to the point that in order to do this event, we had to bring in a generator and arrange for heating,” Rabbi Kaplan said. “However, the original benches are still there, and we were able to sit in them as we listened to the maamar.”

The height of the event occured following maariv and the singing of daled bavos, when Rabbi Nochum Bukiet, senior mashpia of Yeshivas Lubavitch of Baltimore, gave over the maamar.

“The atmosphere was truly uplifting,” said Rabbi Spitezki, who emceed the evening. “Learning the maamar at the same time and place as the Frierdiker Rebbe said it was truly a highlight.”

Following remarks by Rabbi Elchonon Lisbon, rov of the Anash Shul Ohel Levi Yitzchok, Rabbi Kaplan related some of the history of the Lubavitch community in Baltimore. One especially poignant story that he shared took place in a room off to the side of the one they were sitting in.

“Before I came to Baltimore,” said Rabbi Kaplan, “Rabbi Moshe Groner told me the following: In 5711 (1951), he was sent on Merkos Shlichus to Baltimore. The Rebbe told him they should ‘station’ themselves in Reb Avrohom Elye’s home. The first day after arriving at his home, they went to the Tzemach Tzedek’s shul to daven.

“When the bochurim finished davening, they wanted to leave and begin their mivtzoim. However, Reb Avrohom Elye told them to wait until he finished davening. When he had finished, he took them into a room and removed a blanket which was covering a chair. ‘On this chair,’ R Avrohom Elye said, ‘the Frierdiker Rebbe sat and said a maamar.’ He then burst out crying and could not be consoled.”

In honor of this occasion, the maamar was produced with English translation by Reb Noach Shavrick. He dedicated it in memory of his ancestor, Rabbi Chaim Schneur Zalman Dov Ber Shavrick, a shochet and one of the leaders of Chabad Chassidim in Baltimore, who was present when the Rebbe said the maamar in 1930.

Each participant received a teshura which includes the maamar and a letter from the Frierdiker Rebbe to his Rebbetzin describing the evening on which this maamar was delivered. The teshura also contains newspaper articles that were written at the time of the Frierdiker Rebbe’s visit to Baltimore.

At the conclusion of the evening, the bochurim broke out in a joyous dance.

“It was a big simcha to come back to this historic place after so many years and learn the maamar here,” Rabbi Spitezki said.