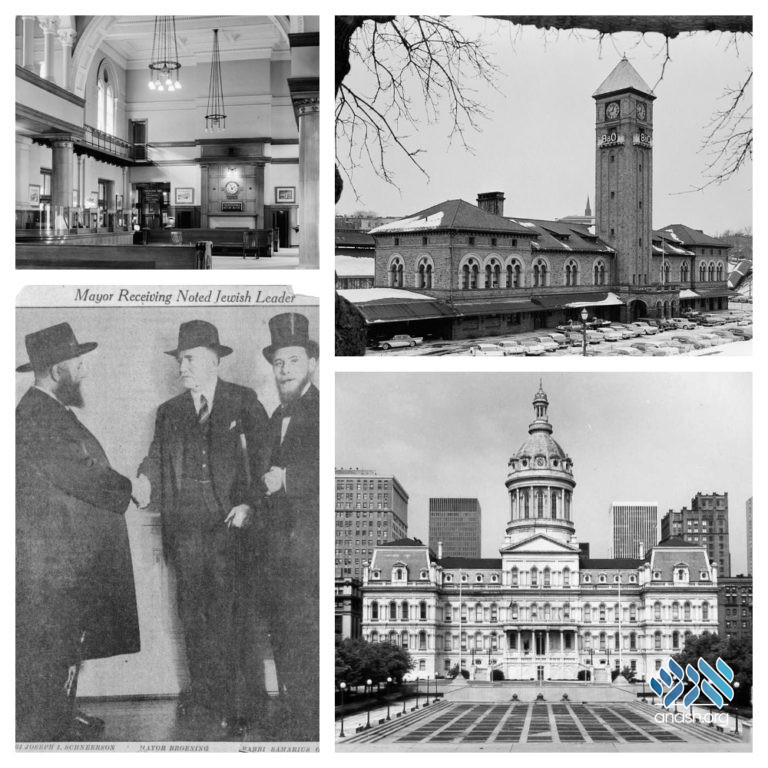 A 1930 newspaper clipping from The Baltimore Sun describes the Frierdiker Rebbe’s arrival in Baltimore and speaks of the Rebbeim’s impact on the Jewish world at the time.

90 years ago, the Frierdiker Rebbe came to the US for one year and visited several US cities, where he recited maamorim and met with individuals living there.

A newspaper clipping from The Baltimore Sun details one of these visits and the historical context surrounding it.

“Religious Jews in Russia are grateful in the Soviets because that Government has consistently repressed anti-Jewish pogroms,” Rabbi Samarius Gourary, son-in-law of and spokesman for Rabbi Isaac Schneerson, famous Jewish leader, said last night. Rabbi Gourary spoke in Yiddish, which was translated by Rabbi Adolph Coblenz of Chizuk Emuna Congregation.

In the afternoon more than 3,000 Jews welcome Rabbi Schneerson when he arrived at Mount Royal Station. An automobile parade of hundreds of cars escorted the rabbi to his temporary Baltimore residence, 2343 Eutaw Place, where he was welcomed with Jewish songs and ceremonies.

Rabbi Schneerson, who was born in Russia and has spent practically his whole life there, leaving in 1928 after a term of imprisonment because of his activities as a leader in the organization of Russian Jewish religious schools.

During his two-month stay in the United States the rabbi will enlighten the people of the United States as to the actual conditions of Jewish life in Soviet Russia and how these conditions can be improved to accord with the policy and legislation of the Soviet Government, which is anti-religious.

The second factor which interests the rabbi is the raising of funds to aid in the support of schools and academies he and his late father, Rabbi Shalom Schneerson, founded during their thirty-seven years of religious educational work in Poland, Lithuania, Palestine and other lands.

It was on June 16, 1927, that the rabbi was arrested. After being held for seventeen days he was sentenced to three years’ imprisonment, in Kostroma, Central Russia, for his religious work. He was released only when Jews from every part of Europe and America petitioned the Government for his release.

He was given his freedom, and permission was granted him to leave the land, which he did early in 1928, taking up his residence in Riga, Latvia. From there he directed his religious work.

Prior to the advent of the Soviet regime Russia was the scene of numerous anti-Jewish outbreaks. In spite of the elimination of these persecutions however, Rabbi Gourary said the economic status of the religious Jew in Russia at this time is deplorable.

Since the Czarist regime forbade the Jews the ownership of land, their energies were directed along other channels, most of the Jews becoming merchants and traders. Since the Soviet policy is adverse to individual trading, naturally the 3,000,000 Jews who depended primarily on commerce for their subsistence are hard hit, the rabbi said.

Some Turn to Industry

A small number of Jews have turned to industry, while others have found employment in Government offices and factories. However, the latter are mostly unorthodox Jews, who are more welcome to the Soviets than those who tenaciously cling to the faith of their fathers, the educator asserted.

Industry, it was said, is the natural outlet because through industrial life religious conditions can be ameliorated in conformity with the laws of the land. It is this desire to cooperate with the Government as far as their attitude toward the Jewish religion is concerned and to learn how to adapt their religion so that it fits within the category and law laid down by the Soviets that the Jews are working toward.

Rabbi Schneerson is 50 years old. He is of medium height, with heavy beard, once red, but now with graying streaks. His kindly eyes gleam from under his broad, round black hat. Throughout the afternoon and night, he welcomed members of both Orthodox and Reformed Jewish congregations, and representative of various Jewish organizations.

After leaving Riga some months ago he went to Palestine, Germany and France before coming to America. In New York he was greeted by thousands of Jews from all over the country and an official welcoming committee on the tug Macon, appointed by Mayor James J. Walker, of New York

The rabbi comes from a long line of rabbis, who have been active in Russian Jewry for the last 150 years. He is the lineal descendant of the Ravi of Liadi (Schneerson), who lived 150 years ago and who was one of the founders of the Chassidic movement in Russia. The movement was the expression, in a renewed form, of the age-old mystic yearnings of the Jewish people.

The Rav of Liadi became the founder of a dynasty, the spiritual leader to whom multitudes flocked from all of Europe for guidance, comfort and inspiration.

Rabbi Gourary comes from one of the wealthiest landed Jewish families in Russia, where, under the old regime, it owned large holdings in Odessa and Krimisichuk [Kremenchuk].

The rabbi and his party will remain in Baltimore for two weeks. He was welcomed to Maryland by Major Thomas G. McNicholas, who represented Governor [Albert] Ritchie. The rabbi, through an interpreter, expressed his appreciation of the reception and sympathy shown him in this country since his arrival two months ago.

Mayor to Receive Him

Delegations from New York and Philadelphia, where the rabbi has spoken, accompanied him. A municipal reception is planned for Thursday at the City Hall, where he will be received by Mayor Broening.

It was a representative crowd that gathered at the station and on the grassy slopes leading up to Mount Royal Avenue to welcome the rabbi and his party. A pressing throng gathered around Rabbi Schneerson when he descended from the train. After a few minutes, during which time he was officially welcomed to the city, the long procession of automobiles drove out Mount Royal Avenue to the rabbi’s temporary residence. Here, a new throng had gathered to greet him.

Finally, he was led to his private quarters on the second floor, where he begun meeting delegations of Jews and where he shortly afterward started his work. Throughout the remainder of the afternoon and evening, however, hundreds of Jews called to see the rabbi.