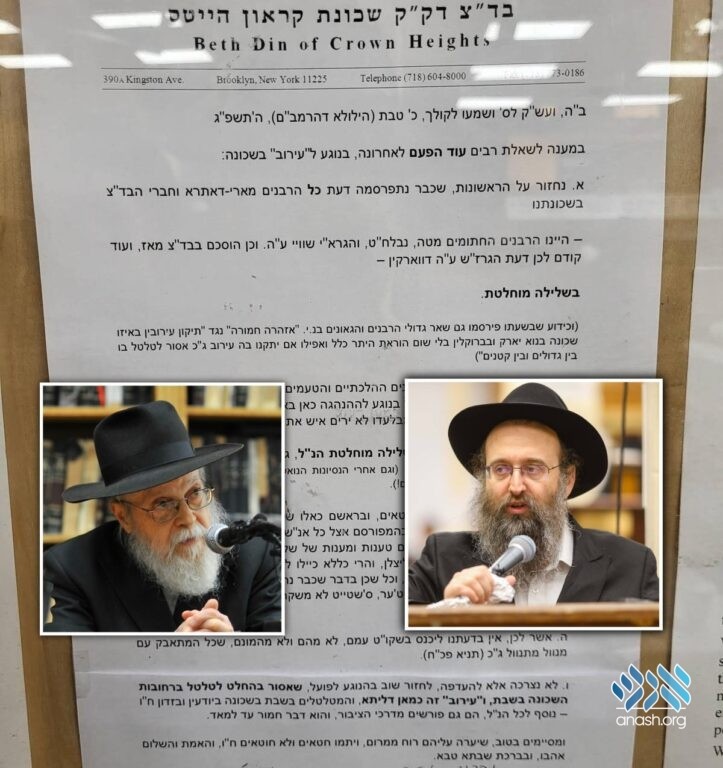 The Crown Heights Beis Din, headed by Rabbi Avrohom Osdoba and Rabbi Yosef Braun, published a new letter confirming the invalidity of the “Brooklyn Eruv” and decrying the attempt to rewrite the Rebbe’s position on eruv.

The Crown Heights Beis Din, headed by Rabbi Avrohom Osdoba and Rabbi Yosef Braun, published a new letter confirming the invalidity of the “Brooklyn Eruv” and decrying the distortions of the Rebbe’s established position.

The following is an excerpt from their letter:

“The position of all the Rabbonim and members of the Beis Din of Crown Heights has already been publicized – including the Rabbonim signed below and Harav Yaakov Schwei, and this had been decided by the Beis Din way since its inception and also that of Harav Zalman Shimon Dworkin – that it is absolutely unacceptable.

“(It is well known that at the time other leading rabbonim in New York publicized a strong letter stating that “establishing eruvin in New York / Brooklyn has no heter whatsoever, and even if one would be built it is invalid for use both by adults and children.”)

“Here is not the place to enumerate the halachic explanations and the issues with an eruv in modern metropolises, especially with regard to the Rebbe’s shechuna which must follow his word.

“Recently some people have stood up … and have come to cast doubt (safek being the same numerical value as amalek) on that which is well known to Anash. They publicize attacks with false information and arguments that they try to attribute to our Rebbeim. Chazal have said that “People don’t lie about something which will become known,” and how much more so about something that has already become known. About those who do the Rebbe said, “It is written that ‘people’ don’t lie, and those who do this are not considered ‘people'” …

“We need only to reiterate the practical ruling that it is absolutely prohibited to carry on Shabbos in the streets of Crown Heights, and the “eruv” is as nonexistent.” Those who carry wantonly are transgressing all of the above and separating themselves from the community.”