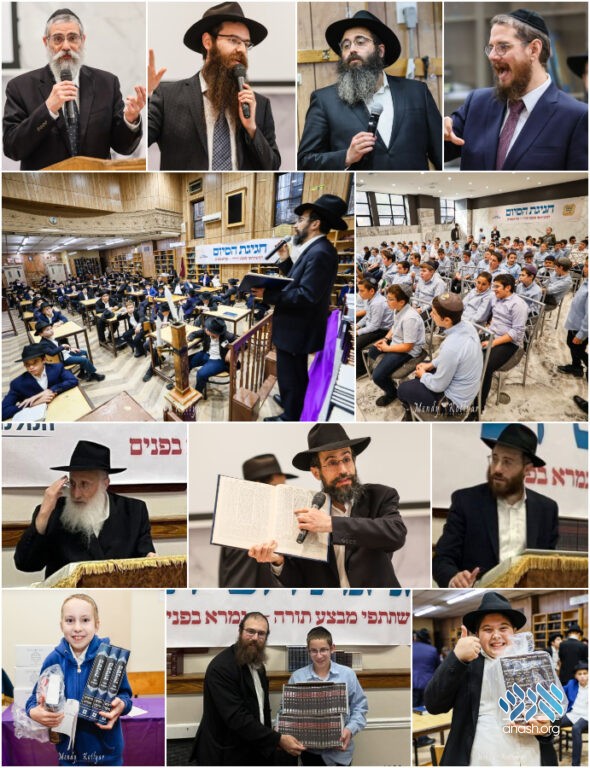 Over 350 students attended four different events in the New York area, with many more taking place over the next two weeks, to launch this year’s Gemara “Bifnim” program in Lubavitch schools across the country.

The program, which motivates and rewards students for mastery of the text, a skill that is critical to their success through school and yeshiva, is entering its fifth year and has more participants than ever before. To invigorate students with fresh inspiration, Igud Hamelamdim held four award events in Oholei Torah elementary and Mechina, United Lubavitcher Yeshiva, and Cheder Lubavitch of Morristown. Additional events are set to take place next week in Chicago, Baltimore, Detroit, and Toronto.

Heartfelt enthusiasm was felt as the students took in the core message echoed across the events on the significance of “Bifnim” learning in enjoying to learn and becoming an independent lifelong learner.

At Oholei Torah elementary school, principal Rabbi Yehoshua Lustig compared the program to learning how to ride a bike: though it requires practice at first, it then becomes a life-long skill that is second nature.

United Lubavitcher Yeshiva Dean, Rabbi Yosef Simpson, lauded the effectiveness of the program and encouraged them to take advantage of it. Oholei Torah Mechina Principal Rabbi Chaim Yisroel Wilhelm and Rabbi Yosef Wolf of United Lubavitcher Yeshiva addressed talmidim in their yeshivos respectively. The principals all thanked Igud Hamelamdim for all the benefit the program has brought their students.

The efforts are paying off. Bochurim graduating from this program are far more advanced than their peers in deciphering a page of Gemara on their own, reports program director RabbiAronson.

The events also applauded last years’ finalists of the program, by rewarding them with their earned prizes of valuable seforim sets. At each venue, principals lead the procession of awarding the prizes to their students. Seeing the reward for their efforts incentivized the boys to commit themselves to succeed in the program this coming year.

Gemara Bifnim, a project of Crown Heights based Chinuch organization Igud Hamelamdim, has now embarked on its fifth year and will be operating in 33 classrooms (grades 6-8) across the US and Canada. Many schools eager to join have been contacting Igud, as the program makes plans to expand.

“While being able to read the Gemara inside is assumed to be basic to learning Gemara,” explains Rabbi Avrohom Bluming, “the reality is that it is becoming a growing challenge. Children nowadays are finding it ever more challenging to focus on words on a page, and it really hits them hard when they enter yeshiva. Our revolutionary program has made significant in-roads in affording children these fundamental skills in an exciting manner.”

To learn more about the details of this innovative program, click here.