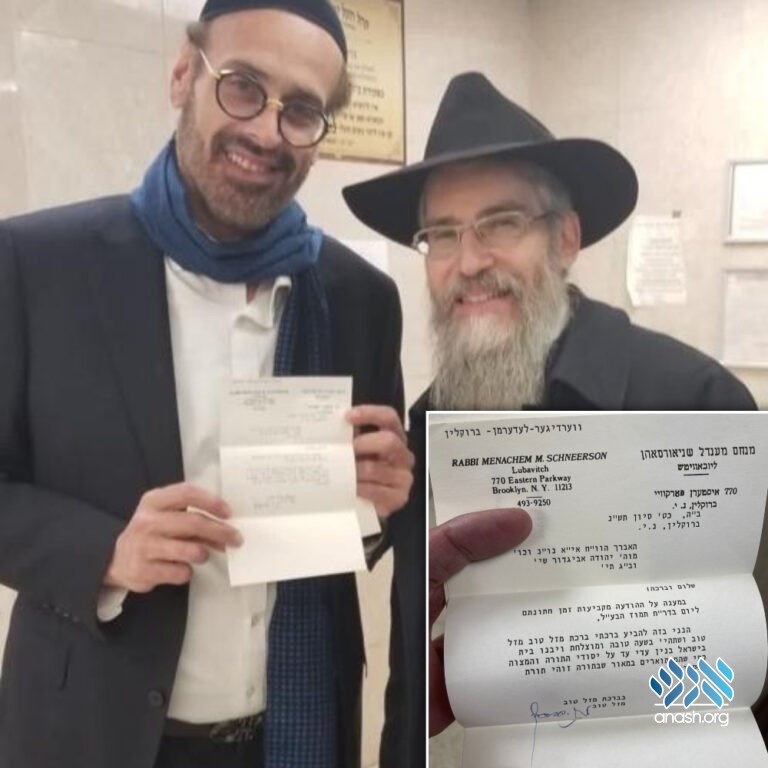 Chassidic singer Avraham Fried delivered a special letter to a fellow singer this week, 31 years after it was written.

Yeedle Werdyger, singer and son of Mordechai Ben David, was surprised to get a call from Avraham Fried, asking where he was as he had a gift for him.

Werdyger couldn’t imagine what that gift would be.

He was at a sheva brachos in Boro Park, and Avraham Fried drove over to meet him. Wearing a gartel, he asked Werdyger to call his ‘kallah’, as this gift was for both of them. When Werdyger’s wife arrived, Avraham Fried handed them a letter from the Rebbe, wishing mazal tov and brachos on the occasion of their wedding over 31 years ago.

The letter had remained in 770 all these years and was never delivered. A son of one of the Rebbe’s secretaries found it recently and called Avraham Fried for help in tracing down the recipient. A phone call to Mordechai Ben David confirmed that Yehuda Avigdor Werdyger was his son.

Werdyger was amazed and moved by the incredible gift of the Rebbe’s brachos and the manner in which he received it.

“I’m sure the brachos were already mekuyam since the letter was signed,” he said, “But the shleimus of it is getting the letter… and wow, what a shliach to bring it. It makes the whole thing even more amazing.”