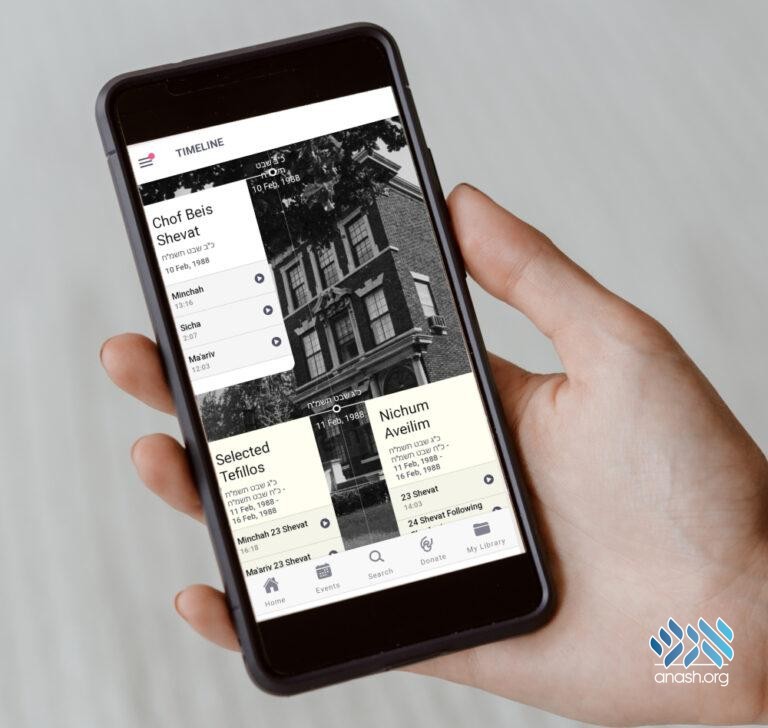 Soon after the Rebbetzin’s Histalkus, following the first Mincha the Rebbe Davened at the Amud, the Rebbe spoke a short “opening” Sicha to the Shiva for the Rebbetzin, concluding his words with the message of והחי יתן אל לבו.

Throughout the week that followed, thousands of people came to the Rebbe’s door for Nichum Aveilim, including many distinguished visitors. Hours of these conversations were recorded on tape at the time.

As the week passed by, the Rebbe Davened 3 Tefillos at the Amud every day, and at the conclusion of the Shiva spoke a powerful Sicha, thanking those who had sent comforting wishes, and speaking of the upcoming Geulah, when we will be reunited with those who have passed.

An urgent gathering of Chassidim took place in 770 during the Shiva, on Chof Vov Shevat, followed by a Farbrengen at the Rebbe’s request at the conclusion of the Shiva, beginning in the Rebbe and Rebbetzin’s home and continuing in 770 throughout the night.

A new audio timeline from Ashreinu.app collects all of these events and more, including the Sichos, Nichum Aveilim, Tefillos, future Yahrtzeits, Chassidim’s Farbrengens and recordings of Chazara of Shabbos Farbengens, for a comprehensive audio experience of all the events connected to Chof Beis Shevat throughout the years.