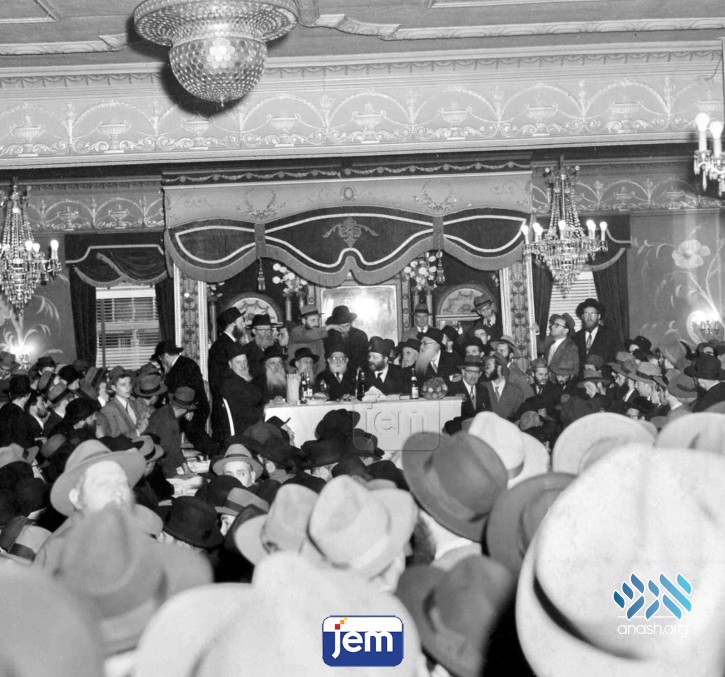 After 60 years, an hour-long audio track of a special, one-time occurrence at the Rebbe’s farbrengen was published.

Yud Tes Kislev 5718 will be remembered by all those present as a unique Farbrengen, especially for the “out of the ordinary” occurrence, in the Rebbe’s own words.

Appealing to the Chassidim to financially support the new settlement being built in Kfar Chabad, the cornerstone of which had been laid that day, the Rebbe announced that, in a “departure from the norm”, a Magbis will be held on Yud Tes Kislev. In a “further departure from the regular order”, as pledges were written down and submitted to the Rebbe, the Rebbe began reading the notes and publicly calling out names of those who had pledged, asking them to increase their contribution.

“Give twice as much”. “Twenty times as much”. “Why are you negotiating? Today is the Alter Rebbe’s celebration!”. “Forty nine times as much”. “Give as much for each family member whose name you wrote”. “Add a zero at the end”.

For close to an hour, the Rebbe urged Chassidim to double, triple, and even to increase a hundredfold their donations to Kfar Chabad. The Rebbe’s demeanor was very joyous throughout, singing several Nigunim and calling on many individuals to say L’chaim.

This one time occurrence can now be heard in full and in the clearest possible audio, thanks to the restoration of the Farbrengen by JEM’s Ashreinu app. With original recordings from the Shochet collection, this event is now 6 hours long, and includes an hour and a half of newly published content.

Listen to this audio track in full, and discover many previously unknown moments, perhaps of a family member’s special interaction with the Rebbe you have never heard before.

Listen here, and take a moment to partner with Ashreinu in the ongoing restoration campaign by donating at restore.ashreinu.app.

Also noteworthy is the Farbrengen of the following Shabbos, the deadline the Rebbe set for fulfilling the pledges, where the Rebbe explained this unique event and why he pushed Chassidim to go out of their boundaries. See the transcript from Lahak here.