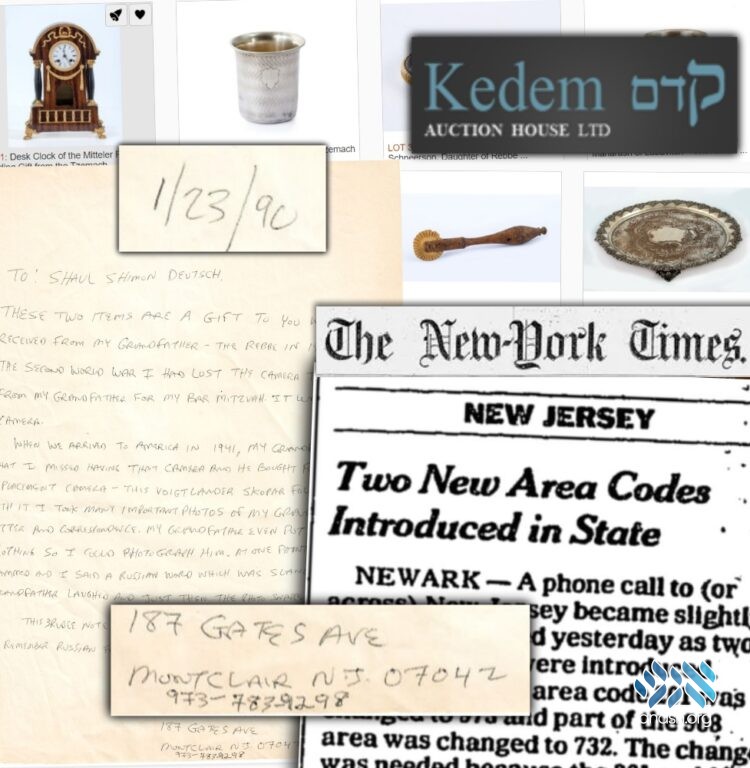 A months long investigation has uncovered that at least one prominent Judaica auction house has turned a blind eye to allegations, and even proof of fraud, choosing to continue to sell tens of items purported to be from six of the seven Chabad Rebbeim.

With the price of silver rising, a silver kiddush cup might go for as much as $300. If it were 100 years old and in moderate condition, it would sell for considerably less. However, if that same century-old becher came with a letter establishing it as one used by a famous Jewish figure, the price would suddenly shoot up. It could sell for thousands or tens of thousands of dollars, depending on the precise figure cited.

With the markup so considerable, it is self-understood that there are many who would grab the opportunity to sell off an item as a historic artifact, collecting a sizable payout. With recent explosion in the market of Judaica auctions, buyers are relying more and more on the auction houses to properly authenticate the items they sell as legitimate.

Despite that trust, and despite their statements attesting to their own credibility, a months-long investigation has revealed that at least one prominent Judaica auction house has turned a blind eye to serious allegations of fraud, choosing to continue selling items under question and rake in tens of thousands of dollars.

Over the past two years, the auction market has been flooded with a seemingly endless stream of artifacts purportedly related to the Rebbeim and their family. These items, which were claimed to have originated from six of the seven Chabad Rebbes, captured the attention of many Chabad chassidim and collectors of Judaica around the globe.

It did not take long to realize that all the items originated from a single source. The source, who we shall identify as S.D., stated that he had received them from members of the Frierdiker Rebbe’s family. He provided proof for each item in the same manner: a signed letter by the above-mentioned family members who gifted it to him, detailing the item’s provenance, and writing that they were gifting it to S.D.

Beyond serving as alleged authentication for the items being sold, the letters, if genuine, would provide countless nuggets of Chabad history, and the inner workings of ‘beis harav’, the family of the Rebbeim throughout six generations. As such, the letters were closely examined by scholars and historians alike, eager to ascertain whether they were authentic. With few documents to compare the handwriting to, it seemed hard to prove either way. Yet, an investigation by Anash.org can now show incontrovertible evidence for the forgery of one of the elaborate authenticity documents accompanying the items up for auction.

One of the early items offered up for sale, on June 30, by Genazym auction house, was an old camera. The camera was accompanied by a letter purportedly written by the Frierdiker Rebbe’s grandson, Mr. Barry Gurary, attesting that this camera was given to him as a gift by his grandfather, and was used by Mr. Gurary to capture some of the famous pictures of the Frierdiker Rebbe. Of the myriad items put up for auction recently, this one would appear to have one of the more plausible stories of provenance.

But buried at the bottom of this letter lies the smoking gun of forgery. Following Mr. Gurary’s alleged Hebrew signature, the writer provides his contact information—a Montclair, N.J. address and phone number: 973-783-9298.

The problem? The area code of 973 was created on June 1, 1997. A day later, on June 2, 1997, the New York Times reported that “the owners of about eight million New Jersey phone numbers began trying out their new area codes yesterday.” The date on the top of “authentication” letter? 1/23/90.

This letter, including a phone number that only came into existence in 1997, could thus certainly not have been written in 1990. Rather than a letter of authentication, this letter is incontrovertible proof of forgery.

Even before the forgery came to light, Genazym auction house stated that after their experts raised doubts over the authenticity of the items provided by this seller, they refused to sell any further items from this source and shared their suspicions with other auction houses.

But when it comes to Kedem Auction House, a Jerusalem-based auction house that prides themselves for having the “highest level of credibility” and for “employ[ing] a growing team of experienced specialists and experts,” a proof of forgery, a long list of questions that throw doubt on the items, and even rejection by another auction house don’t seem to be enough.

When contacted by Anash.org regarding the forgery, Kedem responded with two long-winded statements. The statements address the seller’s connection with members of the Gurary family and defend specific items that had been sold. When asked directly about the forgery and other auction houses refusing to sell his items, Kedem declined to respond.

Even if one chooses to believe Kedem’s proofs, the auction house refuses to address the elephant in the room: If S.D. has been proven to produce forgeries, his alleged relationship with the Gurary family bears no merit. With prominent auction houses publicly denouncing him, their attempts to defend specific items bear no weight. For if Shlomo Yehuda Friedlaender, the infamous forger of Yerushalmi Kodshim, would “uncover” another manuscript, no serious scholar would believe him, even if he provided long letters of authentication.

Even after being presented with the proofs, Kedem chose to announce yet another auction with yet another collection of items from the same seller, “authenticated” by the same letters. Their obstinate refusal to consider stopping their sales raises even a wider question: Do all the items sold by Kedem have the same level of reliability as the ones under question?