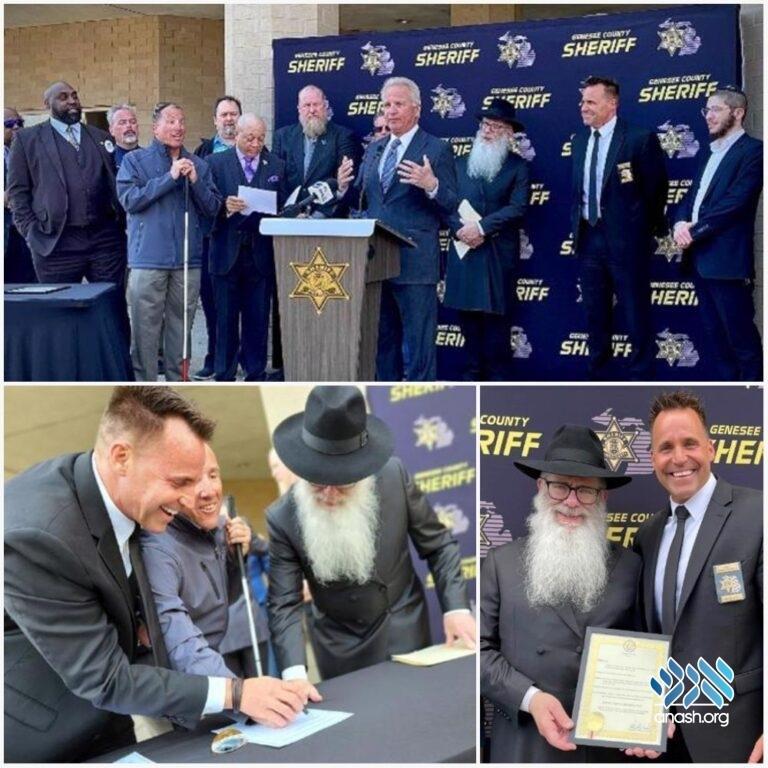 It’s an unlikely friendship: Genesee County Sheriff Chris Swanson, and Shliach Rabbi Yisrael Weingarten. But the friendship has led the Rebbe’s teachings on criminal justice reform to reach even further.

It’s an unlikely friendship: Genesee County Sheriff Chris Swanson, who leads Michigan’s 10th-largest police force, and Rabbi Yisrael Weingarten, director of Chabad-Lubavitch of Eastern Michigan in Flint. The pair regularly meet at Weingarten’s home to talk ethics, morality and Judaism. Though not a member of the tribe, Swanson appreciates Jewish teachings and his discussions with Weingarten.

It was during these conversations that Swanson, who as county sheriff has pioneered an extended educational project for Genesee County prisoners dubbed Project IGNITE, began to explore the foundational criminal justice reform teachings of the Rebbe. Indeed, central to the Rebbe’s approach to crime reduction and the incarcerated was the vital need for their rehabilitation and education.

On April 12, the 120th anniversary of the Rebbe’s birth, dozens gathered at an event organized by the Genesee County Sheriff’s Office to proclaim and mark Education and Sharing Day in honor of the Rebbe. While Education and Sharing Day is a national tradition dating back to President Jimmy Carter—President Joe Biden proclaimed it this year—and takes place in states, cities and localities across the United States and around the world, the venue chosen for the Flint event was particularly poignant: the Genesee County Jail.

Swanson was first thrust into national prominence during the nationwide unrest in the summer of 2020, when he reached across community lines to bring calm to Flint and foster greater understanding and sensitivity. A newly-appointed sheriff at the time, he also gained national recognition for spearheading Project IGNITE (Inmate Growth Naturally and Intentionally Through Education). Rather than prisoners “staring into the void of the crushing monotony of jail time,” Swanson wrote in an April 2021 op-ed in USA Today, “these men and women are quietly furthering their education.”

From studying toward their high school diplomas or GEDs to learning a vocational trade like plumbing, welding or carpentry, inmates in Genesee County go to school five times a week for two hours each day. Swanson points to data showing that incarcerated individuals who receive an education while serving their sentences are up to 43 percent less likely to return. (The United States has one of the world’s highest recidivism rates: Some 76.6 percent of prisoners are rearrested within five years.)

The education doesn’t end with release: Genesee County operates a facility where former inmates, no matter when they were released, can continue their education free of charge.

It was from Weingarten that Swanson first learned of the Rebbe’s outlook on the criminal justice system.

“If a person is being held in prison, the goal should not be punishment, but to give him the chance to reflect on the undesirable actions for which he was incarcerated,” the Rebbe said during a 1976 public address. “He should be given the opportunity to learn, to improve himself and to prepare for his release, when he will commence an honest, peaceful new life, having used his days in prison towards this end.”

Failure to give inmates these opportunities, warned the Rebbe, will only serve to encourage crime and recidivism. “The prison system not only fails at its purpose, it creates a greater criminal than there was before,” he said.

The April 12 event was led by Swanson and fellow county officials, who proclaimed Education and Sharing Day in Genesee County. Flint Mayor Sheldon Neeley was also there, honoring the Rebbe’s birthday—and the focus on education the Rebbe was so passionate about—in Flint proper. Other participants included county prosecutor David Leyton and Michigan Supreme Court Justice Richard Bernstein. Additionally, all county public schools took part in the event via Zoom.

“We’re setting aside—as all government workers and leaders should do—a day to recognize education and sharing, and what better place than the jail where the IGNITE culture change is taking place and spreading across the nation,” said Swanson.

“The solemn reason we’re here is to celebrate the life of a pioneer; one who has—because of his message—continued to live on in cities and towns across America,” Swanson said of the Rebbe as he introduced Weingarten.

Following Weingarten’s address, Prosecutor David Leyton, a member of Flint’s Jewish community, took the floor. “In recognition and in honor of the Rebbe’s 120th birthday, it’s important to continue to further Rabbi Schneerson’s belief in education and its importance in our world’s growth,” he said. “Because of the Rebbe’s belief in education, Chabad today supports an international network of more than 5,000 education centers all over the world, and that is quite an achievement.”

Noting that the Rebbe was posthumously awarded the Congressional Gold Medal in 1994 in recognition of contribution to world education, Leyton remarked that “education was important to him, and as Rabbi Schneerson knew, education remains the best possible investment in people today.”