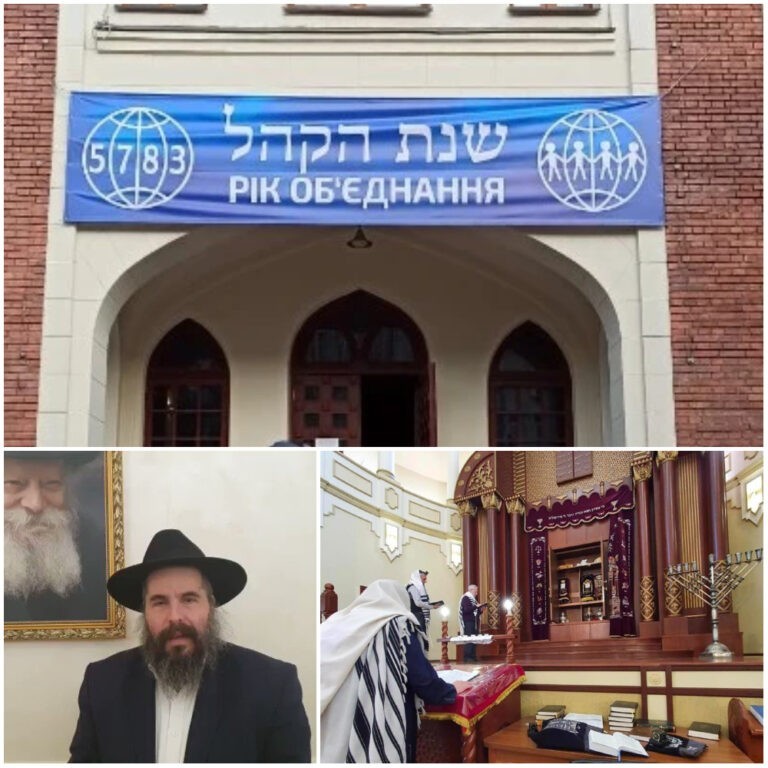 Despite the war continuing in Ukraine, Chabad in Kharkov is working hard to create a meaningful Hakel experience for their community, no matter where they might be.

Traditionally, every seven years, when Jews the world over mark the year of Hakhel, big, colorful Jewish communal celebrations are held in Kharkov, Ukraine. There are concerts, holiday events, special study sessions, and noted guest speakers who draw large crowds to the city’s grand Choral Synagogue. But with the war still raging all around them, large-scale events are off the table this year in Ukraine’s second-largest city. Instead, many smaller gatherings, far more than ever before, are being planned for wherever in the world the Jews of Kharkov may be.

“Even though we can’t have thousands of people gathering at one time this year, we are sharing the message of unity with our community, and doing it in more ways and in more places than ever before,” Miriam Moskovitz, co-director of Chabad-Lubavitch of Kharkov with her husband, Rabbi Moshe Moskovitz, told Chabad.org “We are showing our friends how they can host and attend Hakhel gatherings during the holiday season and all year long with their friends, families and those around them, and spread the spirit of Hakhel wherever they are.”

The Moskovitzes have served as co-directors of Chabad-Lubavitch of Kharkov since 1990, after the Rebbe—Rabbi Menachem M. Schneerson of righteous memory—gave his blessing to the young couple to move to Ukraine, at the time still the Soviet Union, to serve the Jews of Kharkov and the community at large. Although some community members continue to use the Kharkov synagogue as a shelter, their numbers are decreasing, as evacuations are ongoing with buses going from the synagogue to Moldova or Warsaw, and refugees moving on from there to other cities in Europe or to Israel.

Nonetheless, the Moskovitz family is busy making plans for Rosh Hashanah 5783, which begins this year on Sunday night, Sept. 25.

“We are hoping to go back to Kharkov for Rosh Hashanah, despite the situation,” said Miriam Moskovitz, noting that “Kharkov is still under intense bombing throughout the whole city, and in the last 190 days, there has hardly been one day without shelling in the city.”

“We want to be there and give encouragement to the people who are still left behind,” she said.

In preparation for the new year, and with the help of the Jewish Relief Network (JRNU)—Chabad of Kharkov has commissioned more than 1,500 Jewish calendars and will be distributing more than 1,000 kits filled with the necessities of the holiday, including apples and honey, and a small machzor, the holiday prayerbook.

Plans are also underway for a Rosh Hashanah program at a hotel in Jerusalem for Kharkov refugees in Israel so they can celebrate the Jewish New Year together. The Moskovitzes and some of their children have been going back and forth between Kharkov and Israel for the last few months, as the couple has made it a priority to visit members of their community in both countries.

And as it has since the start of the war, Chabad in Kharkov continues to distribute thousands of food packages and hot meals to those in need.