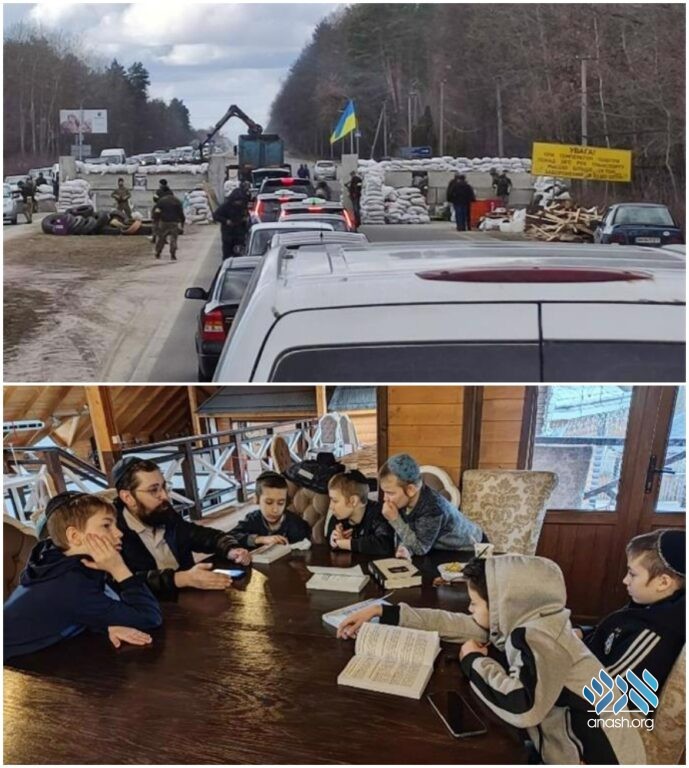 Located near a Ukrainian airbase, Chabad of Zhitomir’s orphanage is in a prime area for air strikes. Over the past week, the shluchim arranged evacuations for hundreds of the community’s ‘most vulnerable’.

As soon as the war in Ukraine broke out on Thursday, Chabad-Lubavitch of Zhitomir began working overtime to arrange for the children in their orphanage and educational institutions to flee to safer ground.

“I’m in the bunker right now, ” Rabbi Shlomo Wilhelm told Chabad.org on Monday afternoon from Zhitomir (Zhytomyr), as air raid sirens wailed in the background. Wilhelm and his wife, Esther, have directed Chabad of Zhitomir and led its Jewish community since 1994. While the harshest fighting is taking place further east in Kharkov (Kharkiv) and Kiev (Kyiv), Zhitomir hasn’t been spared from Russian aerial bombardment.

Chabad’s orphanage is located near a Ukrainian air base, making the area a prime target for air strikes, explains Esther Wilhelm. “On Thursday morning the kids were woken up by the bombings, scared,” she says. They began making evacuation plans immediately. “Just a few hours after the first air strikes, the children were evacuated. They were the most vulnerable.”

The first group to leave Zhitomir numbered about 100 children from Chabad’s Alumim Center for the Advancement and Welfare of Jewish Children in Western Ukraine and three Chabad emissary families who staff the orphanage, led by Malka Bukiet. The children who attend and live at Alumim include orphans as well as those with living parents from severely disadvantaged backgrounds.

“We arrived in a safe location on Friday morning, it took us 15 hours to get here,” Bukiet says. The group is currently in an undisclosed location in the Carpathian mountains, in far western Ukraine. Over Shabbat, they were joined by more refugees from Zhitomir, and the group now numbers more than 200 people. “We have no more space,” Bukiet says. “We had to open a new location for the others who wanted to escape.”

After Shabbat, Esther Wilhelm led a second group, comprised of 40 people, who arrived at a hotel on Sunday evening after an arduous nine-hour bus ride, crossing checkpoints manned by armed soldiers who boarded the buses to examine paperwork.

In one harrowing incident, an air raid siren rang out during a rest stop at a gas station.

“The driver ordered everyone back on the bus and we sped away as fast as we could,” recounts Esther Wilhelm. At the time their bus was near a Ukrainian military installation and the driver made the decision that the safest step was to move as far away from it as fast as they could. Thankfully, they arrived safely.

“We’re just getting our bearings now,” Wilhelm says. The group she traveled with had 12 children, including three of her own, one of whom has special needs. “We’re trying to keep the kids occupied,” she says. “The greatest fear is of what may happen, it’s all been so unexpected.”

Wilhelm adds that another dozen community members are on their way, and more may yet join.

She explains that she is doing her best to keep the mood upbeat. “There is an undercurrent of fear; we keep getting updates from Zhitomir. I’m trying to keep things fun and pleasant,” she says, noting that their surroundings in the snow-covered mountains are beautiful, but boredom causes people to start overthinking the general situation and panic.

Wilhelm’s group plans to remain in Ukraine, at least for the time being, while Bukiet’s larger group from the orphanage is actively working on an escape plan to Romania. While she and the other Chabad emissaries are dual citizens, the children are not, and many of them may not have proper documents to leave the country at all. Fortunately, Bukiet had the foresight to enter her office and gather whatever documents the children did have before they left Zhitomir. In addition to that, sourcing bus drives is difficult as most able-bodied adults have joined the war effort. Still, Bukiet is hopeful that the issues will be resolved and the group will find refuge outside war-torn Ukraine.

Over Shabbat, Bukiet’s group of children made the most out of their circumstances. “We’re trying to give the kids a regular life, as much as possible,” she says, acknowledging that the situation is far from normal. “Shabbat was beautiful, we felt a strong unity. We were all together, with real ahavat yisrael. We brought a Torah scroll and prayer books along and we had Shabbat prayers and meals.”

The worst, Bukiet says, is the unknown. “I don’t know how long we’ll be here, if we’re going, and when we’ll be able to return.”