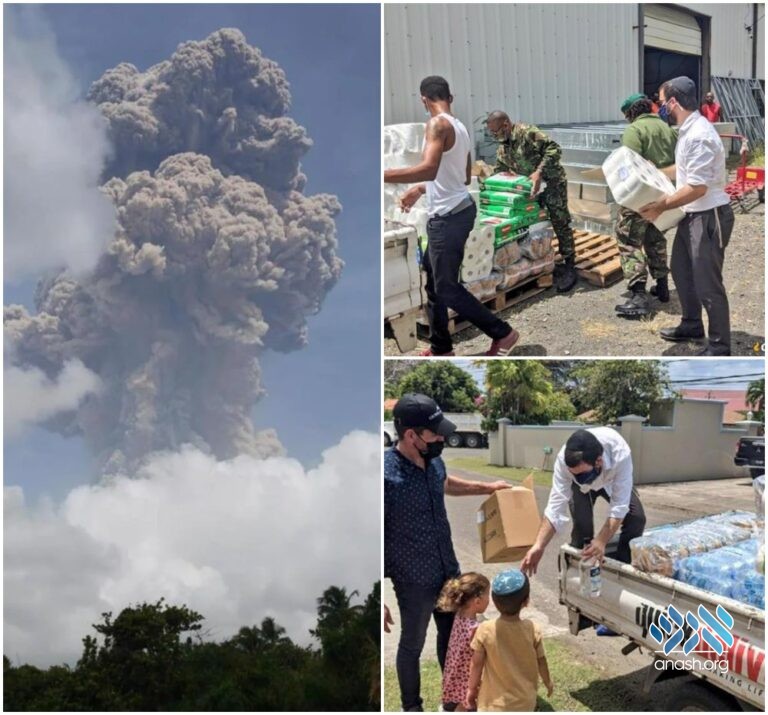 Shluchim Rabbi Avraham & Sternie Super stepped up to provide relief supplies for thousands of residents of nearby islands impacted by the volcanic eruption on S. Vincent.

Shaaryn Behr has lived through hurricanes and tornadoes, but nothing could prepare her for what she is currently experiencing. As Behr lit her Shabbat candles on Friday, April 9, the Caribbean island of S. Vincent lay blanketed by a thick coating of ash, shrouding it in darkness. “As I watched the Shabbat candles flicker, I thought: ‘this is so eerie.'”

That morning at 8:41 a.m., La Soufrière, S. Vincent and the Grenadines’s tallest peak, violently erupted, spewing volcanic plumes up to 26,000 feet into the atmosphere, and covering the island in ash. It had rumbled to life only weeks earlier, after lying dormant since its last eruption in 1979. The eruption continued through Tuesday. Authorities warn that it is “likely to continue for days and possibly weeks.”

The eruption was rated at four on the Volcanic Explosivity Index, comparable to La Soufrière’s historic eruption in 1902, which killed 1,680 people. No fatalities have been recorded at this time; thanks to early seismic activity, authorities were forewarned and issued evacuation orders for the “red zone,” the villages in the volcano’s deadly path. However, authorities fear for the lives of those who stayed behind, as the pyroclastic flow of the volcano has razed everything in its path.

“Hurricanes and tornadoes are one thing, but I never thought I’d see a volcano, it is so surreal,” says Behr, who’s been living in StVincent’s capital city of Kingstown, about 15 miles from the volcano, for the past 11 years, tells Chabad.org. “It felt like an apocalypse. The eruptions were huge. As it was erupting, the plumes were getting bigger and bigger, followed by red flashes. It went on the whole of Friday night.”

When Behr awoke on Shabbat morning, “Everything was dark, the ash came through the windows, our floor was black; we couldn’t breathe. Outside, it looked futuristic.” Shaaryn and her partner, Harry, lost power and water on Saturday, along with the rest of the island. Power has remained spotty since, but since Monday night, they had water.

Following Shabbat there were more eruptions. “It was raining ash. Everybody was in shock. I spent three hours trying to clean my house and just be able to breathe a little. It is hard for people to fathom, you hear of disasters, but actually living through one like this is so, so scary.”

Responding to a Humanitarian Crisis

Meanwhile, on S. Lucia, an island less than 50 miles north of St. Vincent, Rabbi Avraham Super, co-director of Chabad-Lubavitch of S. Lucia with his wife, Sternie, was getting worried. Reports were coming in of thousands of Vincentians displaced, and cruise ships bringing evacuees to S. Lucia. “I saw a humanitarian crisis brewing as soon they said an eruption was imminent,” the rabbi explains.

The Supers opened the Chabad center in 2019, when they began assembling an eclectic Jewish community of about 200 Jewish residents who live on the island at least part of the year, along with serving the many Jewish tourists who visit the islands each year. Chabad is thus the only Jewish organization on the nearby islands providing relief during the current crisis.

On Friday, as La Soufrière hissed and spewed, Super was shopping for what he knew would be needed: water, non-perishables, diapers, toilet paper, cleaning supplies and other essentials. “I know of two Jews on all of S. Vincent, but everyone there needs help. We’re sending aid to S. Vincent, as well as providing what we can to those arriving on S. Lucia.”

With supermarket shelves on S. Vincent cleared, no bottled water available, and tap water feared contaminated, time is of the essence, and the need for the most basic supplies is great, Super says. And the crisis won’t be over soon: with eruptions continuing, authorities expect it will take months to recover.

Even local produce has been ruined, Behr notes. “It’s all covered in ash, and we don’t have enough water to plant more crops right now.”

As commercial shipping takes too long, and is prohibitively expensive, while air travel to S. Vincent is suspended due to low visibility, Super hit upon a plan: He will deliver his truckloads of supplies directly to St. Lucia’s National Emergency Management Organization (NEMO) and they will include it with their own aid delivery to their counterparts at NEMO on neighboring St Vincent.

The aid will be distributed by Behr, on behalf of Chabad, to thousands of Vincentians in need. “People are hosting family and friends from villages that have been destroyed, with sometimes 10 to 12 people in a single house,” she explains. They need food.”

Behr says that her Chabad connection is “bashert [meant to be].” Growing up in a traditional Jewish family in South Africa, she’s long admired Chabad, and is a regular reader of Chabad.org. She tunes in to Rabbi Ronnie Fine‘s daily Tanya class religiously. “They go to places no else will. And they help everyone, no matter what religion you are. I am honored to call myself a ‘Chabadnik.’ “

Living on a small Caribbean island, far away from her family in South Africa, with no Jewish community to speak of, Behr was thrilled to discover that Chabad had been established on the island next-door. “I found them on Instagram one day, and since the pandemic, I’ve been in touch with Rabbi Super almost every day. When the volcano erupted, he reached out right away. It brings tears to my eyes to know that someone is looking out for me; I’ve never had support like this.”

Behr feels thankful just to be alive. “G‑d gave me life, and now I have life today. I sleep with my Tehillim and say a psalm every day.”