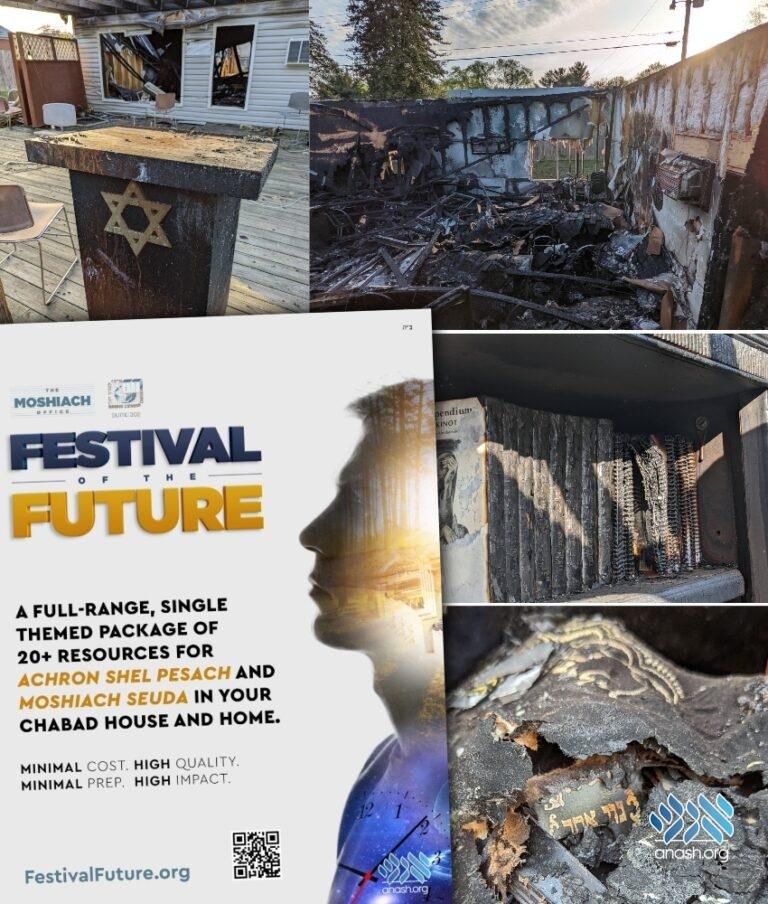 “If there was ever a time in my life that I needed to be transported, this was it,” said Rabbi Shmully Litvin, who led the Acharon Shel Pesach farbrengen this year in Chabad of Louisville, KY just hours after their Chabad House burned to the ground.

Despite challenges, Shluchim worldwide celebrated Acharon shel Pesach this year as an International Festival of the Future.

“If there was ever a time in my life that I needed to be transported, this was it.” These were the words of Rabbi Shmully Litvin, Educational Director at Chabad of Kentucky who led the Acharon Shel Pesach farbrengen this year in Chabad of Louisville, KY just hours after their Chabad House burned to the ground.

In the early morning of Acharon Shel Pesach, a small fire broke out in a building attached to the Chabad House. The fire was quickly extinguished, but due to the excessive smoke Rabbi Avrohom Litvin, Regional Director of Chabad of Kentucky, arranged to host Shacharis at his nearby home.

In the middle of Haftorah, another fire broke out at the Chabad House. Miraculously, the Chabad House was empty, but the congregation was faced with the grim sight of the Chabad House burning as they stepped out for yizkor. They ran over, but the entire building was engulfed and destroyed within minutes.

Determined to celebrate the special day dedicated to the Geulah, they returned to Rabbi Litvin’s home to daven Musaf, duchen, eat the Yom Tov seudah, and daven Minchah. After Minchah, they sat down immediately to the Moshiach seudah.

In Rabbi Shmully Litvin’s words, “I couldn’t use my brain, I couldn’t think, I couldn’t even remember how to start the nigunim. It was just one hour after the fire. Without the program and materials from the Festival of the Future, I would have been paralyzed. Instead, I was fully present and able to farbreng for about three hours about the lessons of Geulah in our current Galus state. Meaningful meditations before each cup enabled us to transport ourselves to the proper mindset, each Nigun with its introduction and presentation of its significance —inspired  me, and in turn, the crowd.”

Several months before Pesach, the Moshiach Office at Merkos 302 created an Achron Shel Pesach program called Festival of the Future. The goal was to empower Shluchim to transform Achron Shel Pesach into a full-day festival celebrating Moshiach.

Initially planned as a beta event to test the idea of Moshiach-themed programming for Chabad house communities, Festival of the Future ended up taking place in more than three-hundred-and-fifty Shluchim participated, including thirty-six Shluchim from Spanish-speaking countries.

Every Shliach received an entire packet that included everything they would need to host an engaging experience. It came complete with marketing materials and a multi-tiered program featuring a pre-davening shiur on Moshiach, a sermon from Rabbi YY Jacobson, and a children’s program for the morning davening, everything was imbued with the theme of the day. For the Moshiach seudah, material for an entire farbrengen was provided in multiple versions: a Chabad house audience, the Shliach’s family, CTeens, and CKids.

The material was refreshingly new, and it gave him the opportunity to present original ideas. The farbrengen was novel and interesting. “We had a nice group,” he observed, “many of whom attend the Moshiach seudah annually, but this year was markedly different. The provided material gave me new aspects to delve into. There were many points that my community and students had not heard before, and it motivated them to think more about themselves and how to view life in a more positive frame of mind.”

Rabbi Litvin echoed those words. He said, “We needed the right mindset, and this did it for us. It helped us frame what happened in a positive light. We farbrenged about the fire and I told them that reality is like smoke and mirrors. Just like the fire occurred in two seconds and something we never anticipated suddenly became our reality, so too Moshiach will change our entire reality in a matter of seconds.”

Rabbi Klein added that the format also gave people an opportunity to participate more than usual. They were able to ask questions because the material prompted input from the audience. “Some people even called me after Yom Tov,” he said, “to follow up and continue the discussions. It was so inspiring that they even made hachlotos in terms of new shiurim and in terms of behavior—adding more Mitzvos.”

Speaking of inspiration, Rabbi Eli Wajsbort at Chabad Wisdom Circle in Parkland, Florida, celebrated Festival of the Future in his home on the afternoon of Achron shel Pesach. It was attended by many seniors who were children of Holocaust survivors. Rabbi Wajsbort told them the story of the Ani Maamin nigun; how it was composed in a cattle car on the way to the concentration camp and the mesiras nefesh with which it was brought to the Modzitzer Rebbe in Eretz Yisrael.

Rabbi Wajsbort observed, “As I told the story, many people, especially the seniors, were enchanted; they were literally in tears. After the story, we sang the Nigun together and I could tell that it brought back memories of difficult times. It was a dramatic moment of intensity and deep emotion. After that, I invited the children to sing “We Want Moshiach Now”. As the children sang and the adults joined, I could see the tears of grief transforming into tears of joy; it was so uplifting and it left a long-term impression.”

Every group is different and each location was moved by another element of the Festival. Rabbi Wajsbort’s seniors responded to the Ani Maamin story. In Louisville, the crowd was especially inspired by inviting the Rebbeim to the seudah, another key element of the program. “One of the things we really loved about the program was the “Let’s Welcome the Rebbeim” segment. We invited each of the rebbeim as we sang their nigun. It was brilliant. Everyone was transported to a completely different space,” said Rabbi Litvin.

After Rabbi Wajsbort completed his seudah at home, he held another seudah at the local minyan between Minchah and Maariv for those who regularly attend the minyan; a mixed crowd of Modern Orthodox, Litvish, and Chassidish. It was their first exposure to Moshiach’s seudah and they too found it refreshing and inspiring. As Rabbi Wajsbort put it, “They were especially moved by the story of Chizkiyahu going to sleep the night before the war and the Rebbe’s explanation that this teaches us how to await Moshiach today with peace of mind stemming from true Bitachon. They found it especially uplifting because of the chaos going on in the world today.”

“Regardless of background or level of affiliation, Moshiach is at the heart of Yiddishkeit,” says Rabbi Mendy Kotlarsky, Executive Director of Merkos 302, “the fact that the Festival of the Future resonated so deeply with all types of crowds is a great demonstration of our shared connection to the Geulah.”