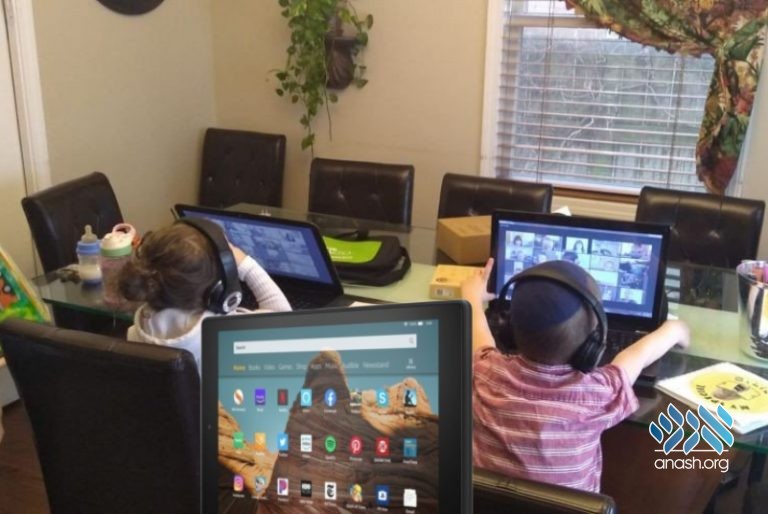 With children spending hours each day online, parents are scrambling to secure their devices, often without proper know-how or support.

Pesach was over and the buzz of activity had subsided as the family settled into a new-normal routine, but Moshe B. was floundering.

As a parent of seven, living in Crown Heights, his children’s schools had announced their transition of classes to an online platform, and it was his job to purchase, set up and ensure the secure filtering of several devices.

Amazon Fire tablets were the least expensive, he discovered, and those shortly arrived at his door. When it came time for filtering, however, he couldn’t figure out how to get the parental controls to work.

“My child was on his class one day,” Moshe told Anash.org, “and my wife suddenly noticed he was scrolling down a page with inappropriate images… it was jarring.”

An ad had popped up, and his son had clicked on it – and this was after controls had been installed.

Moshe got on the phone with Amazon and after an hour and a half, finally had it figured out. However, he is not entirely confident that the issue is resolved.

In a joint statement sent out by several Crown Heights schools, parents are urged to vigilantly remain on top of their children’s internet use. “On the one hand, we have to be thankful that there is now a medium whereby chinuch can still continue. On the other hand, a tool has been provided for them that can be extremely harmful… It is extremely difficult and almost impossible to undo the damage of free internet exposure,” the letter states.

Many parents feel that issuing a statement is simply not enough.

While other schools have given their students secure devices that are monitored remotely, Moshe says his children’s schools have not. They sent out emails, such as the statement mentioned above, and gave some recommendations – and that’s where their involvement ended. “It’s incredibly frustrating, and I know I’m not alone,” Moshe said.

TAG, the most widely recommended filtering service with offices in Boro Park and Flatbush, has been swamped with calls, and their availability to the Crown Heights community is limited.

“Many parents feel stuck,” shared Leah, a mother of five in Crown Heights. “They don’t know who to turn to. With little information and painfully few options, it’s safe to assume that a large percentage of the community has placed devices into the hands of their children without properly filtering them.”

“The nisayon is huge,” says Moshe. “I have a large family and so do many others. If you have to choose between allowing your children to go on a device that’s not properly filtered or have them climb the walls, it’s not an easy choice to make.”

At the very least, schools should be guiding parents in how to set up devices and filters, Leah insists. “We need advice on which tablets and computers should be used, and which should not. Maybe administrations can supply the devices themselves, using government funding and money saved on electricity and other maintenance.”

Many schools received grants for remote learning devices and have supplied their students with the necessary tools to learn from home in a safe manner. Others have yet to do so.

“A friend recommended I use a particular filtering service with an excellent reputation,” Moshe said. “Each device needs a separate filter. With six children at home using laptops and tablets, the cost is prohibitive.”

While no price is too high to protect their children from the perils of the internet, for many families, the money is simply not there. Parents in this situation would like to see schools stepping up to the plate and sharing the responsibility.

“This is a serious question of Chinuch,” Leah stressed. “Without sufficient assistance from the mosdos, is the online schooling really worth it? Whatever is gained can be lost by one wrong click.”