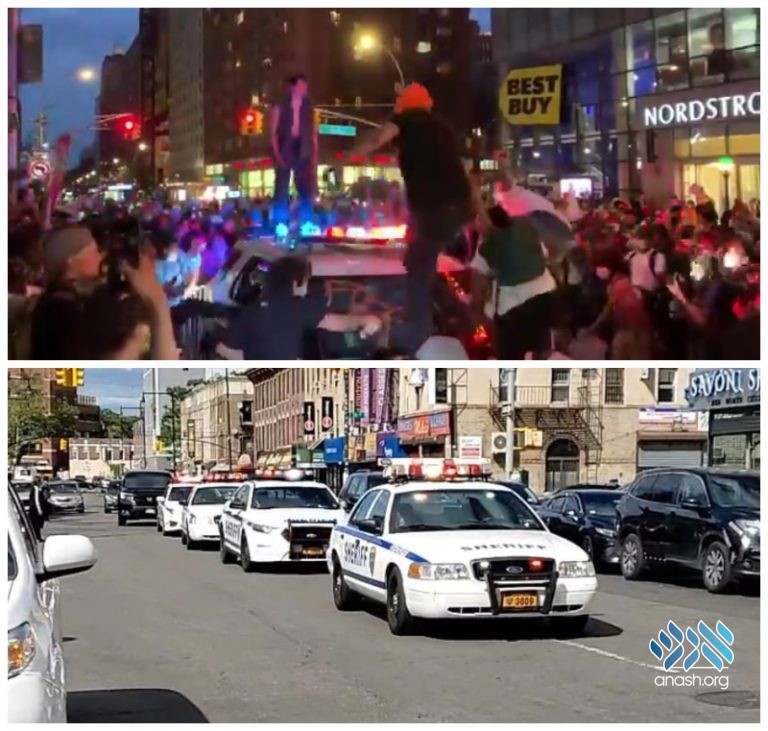 New York City is awash with rioting, fires, and looting, while Bill De Blasio is busy ensuring that the stores and shops on 13th Avenue remain closed and strictly follow coronavirus pandemic restrictions.

Every news station in New York is depicting sheer mayhem in the streets. Storefront glass are shattered by looters and rioters. Police vans are burning. Stores like Moishy’s Bake Shop and Target are being looted to their bare shelves. Police cars are overturned and burned alongside the American flag.

As all this and more is happening, a large contingent of NYC sheriffs are assigned to Boro Park’s 13th Avenue, patrolling the streets to ensure that no one illegally enters a store.

The irony of entire neighborhoods having every store window shattered and dozens of rioters illegally entering and then exiting with shopping bags filled with stolen items has not been lost on Boro Park reidents.

“We are peaceful, and the mayor is coming down with an iron fist upon us,” remarked, Duvid’l, who did not wish to divulge his last name.  “Look what is happening all around.  The mayor has completely lost his mind.  Police officers everywhere else are being attacked by rioters and this is where he sends squad cars?”

The mayor’s actions should hardly come as a surprise. Just over a month ago, after hundreds gathered for a funeral in Williamsburg, he tweeted a statement warning the ‘Jewish community’ saying that “the time for warnings has passed.” His attitude towards large gatherings in parks and to watch an air show was noticeably different.

As thousands gathered for protests in NYC, he suddenly forgot about about the his threat to arrest those in large groups and polity asked them to remember that we are in the middle of a pandemic.