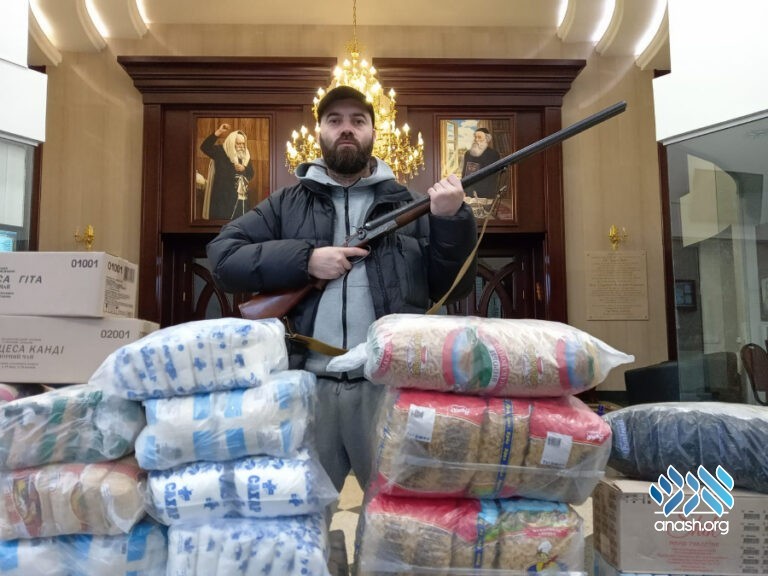 After Ukrainian anarchist gangs attempted to damage the complex near the Alter Rebbe’s Ohel, the management and shluchim have arranged for armed security to guard the holy site.

After Ukrainian anarchist gangs attempted to damage the complex near the Alter Rebbe’s Ohel, the management and shluchim have arranged for armed security to guard the holy site.

Thousands of visitors from across the globe travel every year to daven at the Alter Rebbe’s Ohel in Haditch, Ukraine, and are hosted by the local shluchim, headed by Rabbi Shneur Zalman Deitch. The city is also host to a number of Jewish families, as well as a small yeshiva, which opened just recently.

After Russia invaded Ukraine, a number of shluchim and bochurim evacuated to other countries, with the remaining ones mobilizing to assist Jewish residents of Haditch and nearby towns with food and shelter. They also arranged safe passage to other countries for dozens of local Jews without means of their own.

The management of the Kiryat Rabbeinu Hagadol complex also huge quantities of food products to help the those in need, both Jews and non-Jews. They hoped that their efforts to help all locals would also prevent any residents from trying to damage the complex or even the Ohel r”l. But, as in all of Ukraine, anarchic groups and gangs are roaming the streets of Haditch, taking advantage of the chaos to loot and steal, and they attempted to rob the Ohel complex as well.

Over Shabbos, two groups of local non-Jewish residents attempted to loot the complex, climbing over the fence and demanding that workers hand over food, mattresses and bed. The looters were drunk and behaved very aggressively, shouting and saying that since the country was at war, they must be given everything.

Rustik, the manager of the the Kiryat Rabbeinu Hagadol complex, was forced to shoot in the air to scare them off. “My family and I are already afraid to be here alone. I do not know what to do, I am starting to panic,” he said.

To properly protect and ensure the safety of the Alter Rebbe’s Ohel, the shluchim to Haditch have decided to deploy a professional security company with armed guards across the complex. The guards will make sure no harm comes to the holy site, and allow the remaining bochurim and management to continue assisting Jew and non-Jew alike.

To help the shluchim pay for the guards, as well as to help finance the enormous costs of food and basic necessities for the locals, who are under constant bombardment, the shluchim opened a charidy campaign, where Yidden from around the world can chip in to help preserve the sacred location.