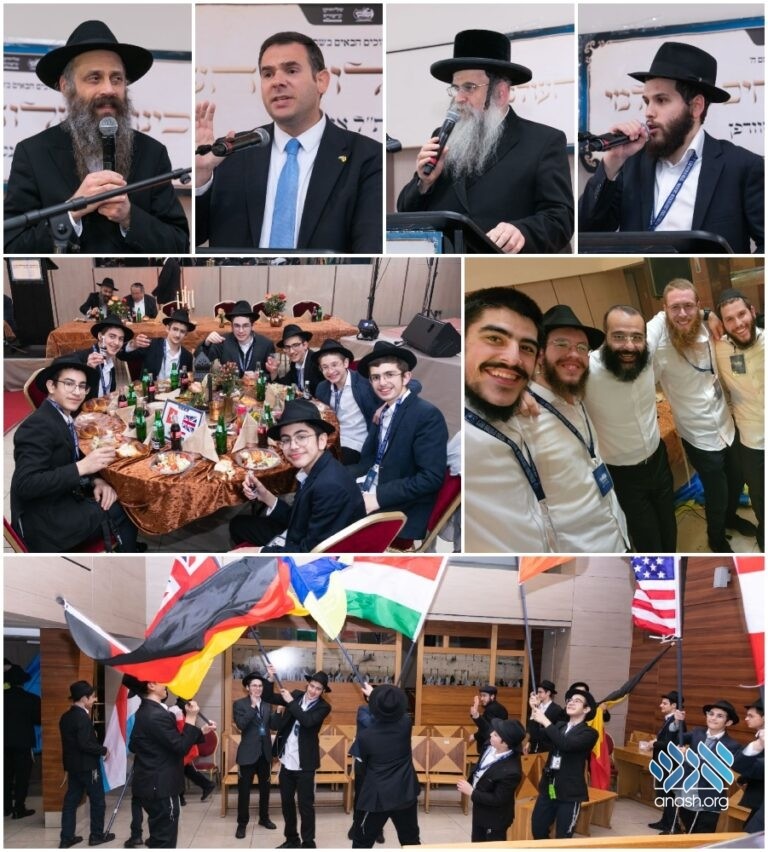 The Antwerp Yeshiva, where a large percentage of the bochurim are shluchim in 26 countries across the world, saluted the young shluchim with a Kinus Hashluchim of their own as their fathers gathered in New York.

While thousands of shluchim gathered in New York for the International Kinus Hashluchim, an event in the Antwerp Chabad Yeshiva saluted their sons, the young shluchim.

The mini Kinus Hashluchim, an annual event in the yeshiva, highlighted this year’s shluchim from 26 countries across Europe and the Former Soviet Union.

The event was attended by all of the students of the yeshiva and the Rosh Yeshiva, Rabbi Menachem Mendel Tvardovich, head Mashpia Rabbi Yehoshua Rabinovich and other Rabbeim from the yeshiva were also in attendance.

The banquet opened with a video from the Rebbe about the importance of the Kinus, and continued with reading the Rebbe’s kapitel. A special video was also shown with greetings to the tmimim from their parents who serve as shluchim around the world.

Immediately after that, the Chairman of the Kinus Hashluchim, Rabbi Moshe Kotlarsky farbrenged with the students via video. The banquet featured a guest speaker, Hungarian Consul to Antwerp Mr. Ari Epstein, who spoke in high esteem of the shluchim.

The bochurim were treated to a special video presentation entitled, “Three Generations in Shlichus.” In the video, Rabbi David Meir Drukman from Kiryat Motzkin, Israel, followed by his son Rabbi Chaim Drukman from Lucerne, Switzerland. The video came full circle with the third generation, a student in the Antwerp Yeshiva, Shneor Zalman Drukman. Shneor Zalman inspired the bochurim with warm words about the role of a Tamim and how Shlichus is carried out in yeshiva.

Rabbi Aharon Shiff, Chief Rabbi of Congregation Shomrei Hadas Antwerp, spoke about the devotion of the Shluchim, the strengths that each student has from his ancestors, and how students can use their strength and study with perseverance and diligence.

Towards the end of the event, video was shown of students from last year bringing a pan to the ohel. All of the Bochurim watched their names being read in the Ohel, a wonderful and uplifting experience for them all.

At the end of the banquet, a roll call was held. With the names of children of the shluchim studying in the yeshiva, 26 countries were read. The students got up and danced together with their friends, from France, Holland, Montenegro, Serbia, Italy, Ukraine, USA, Germany, Chile, Luxembourg. And many other countries.

Each participant got to receive a special gift – a small bottle of Kos shel bracha from the Rebbe.
The event was accompanied by the Hasidic singer, who came especially from Israel, Yoni Shlomo together with Musician Yosef Baramy from France.

Special thanks to the Counselors: Moshe Wishetzky, Yossi Steinberger; who helped in producing the special event. The event took place with the kind help of the MyShalich organization under ‘Merkos’ 302.