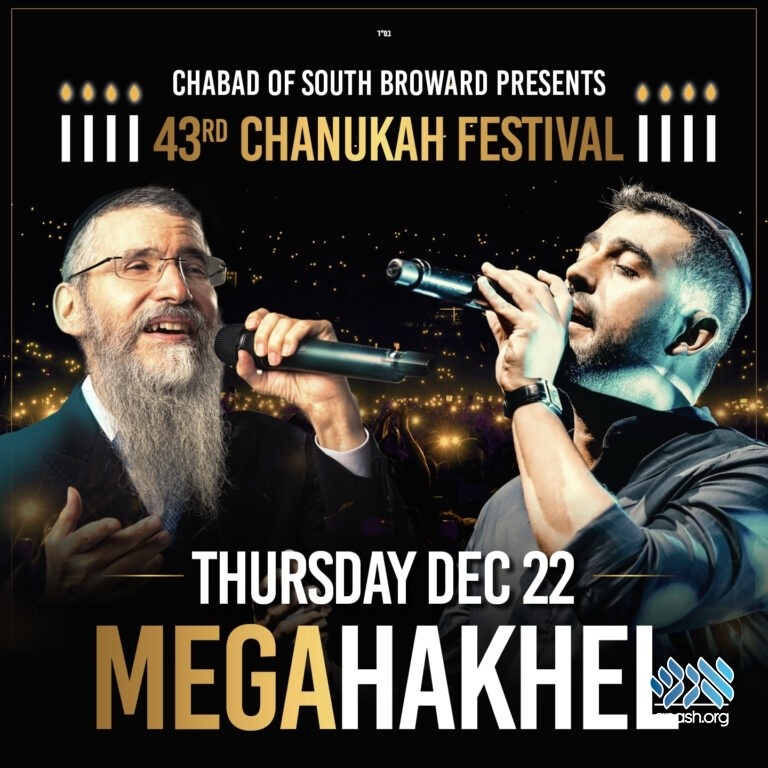 One of the biggest Chanukah programs in the world, Chabad of South Broward will host its annual Chanukah Festival, hosting together for the first time in America, Avraham Fried and Ishay Ribo, who will be bringing their magical annual Chanukah show to the shores of Miami.

For the first time, the 7000-seat Seminole Hard Rock Concert hall in Hollywood, Florida, will be the venue of the annual Chanukah concert hosted by Chabad of South Broward, led by executive director Rabbi Raphael Tennenhaus.

The concert will feature the dynamic duo of the two greatest contemporary Jewish singers from Israel and the States, Avraham Fried and Ishay Ribo. The two share a close bond and will be singing together one week before, at the annual Chabad hosted “Tzamah” event at Binyanei Haumah in Yerushalayim.

For the last five years, Fried and Ribo have been hosting a 12,000-person joint Chanukah concert in Israel, night after night. The show was supposed to hit New York last winter but had to be canceled at the last minute due to the third wave of Corona and the lockdown in Israel. This year, for the first time ever, the two are heading out directly from the Israel concert to the shores of Miami.

Flying together from Israel is an enormous team of 14 musicians and an entire staff of light and sound technicians, a production team, directors, and stage managers, as well as the video and photographers.

Rabbi Tennenhuas told Anash.org: “The Rebbe gave us a special Brachah for our Chanukah concerts, that they should continuously grow each year. We have merited to see the fulfillment of the Rebbe’s Brachah – over time; the event has attracted tens of thousands of participants. Inspired by the Rebbe’s call to initiate gatherings of Yidden in honor of Shnas Hakhel, this year we have gone all out”.

“Typically, our events are hosted by Gulfstream and the Big Easy Casino. This year they both couldn’t host us. Instead of going smaller, we decided to take the leap and go even bigger! We booked the Seminole Hard Rock Hotel, and while we are at it, we’re bringing down the two greatest stars in the Jewish music world today to perform together. With the switch to this prestige venue, we also have better protection from the weather and heightened security.”

Considering the enormous costs of the event this year, for the first time, tickets will be sold at various rates to accommodate the entire community and beyond.

In addition, there are opportunities for sponsorships, with perks including front-row seats or couches, an ad in the program directory, and a meet and greet with Ishay Ribo and Avraham Fried with a deluxe dinner before the festival.

Tickets and sponsorships are available on the event website.