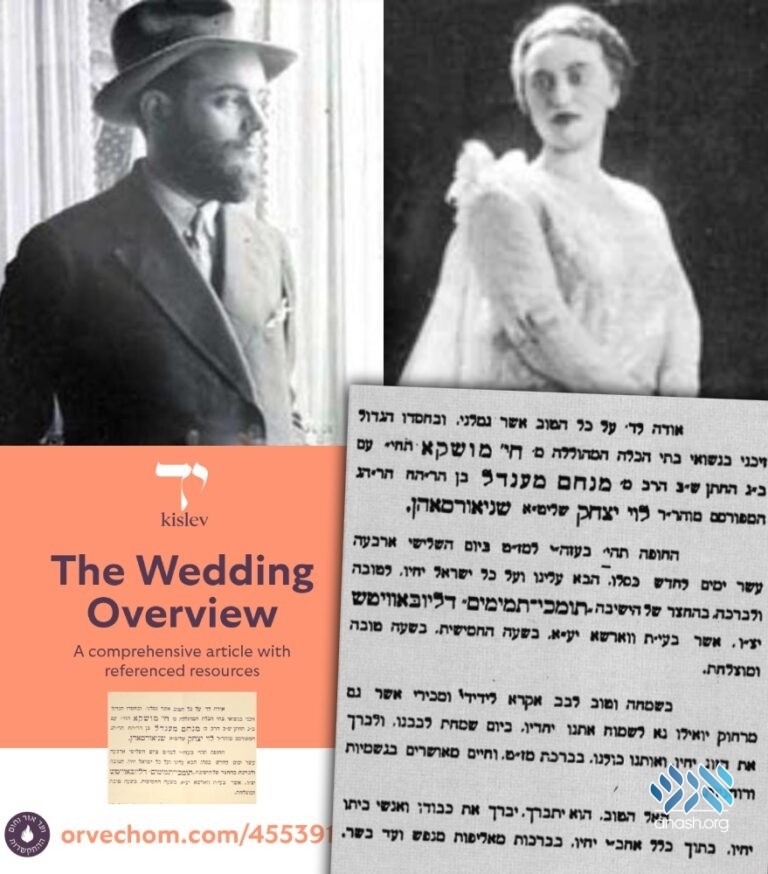 With Yud Daled Kislev under one week away, Chassidim around the world are preparing for the joyous day. Vaad Or vechom presents our resource site on Yud Daled Kislev and its celebration over the years in 770.

It is well known that the Shidduch between the Rebbe and Rebbetzin was planned many years prior to the wedding, as Rabbi Shneur Zalmen Duchman relates in “L’Shamea Oizen” that the Rebbe Rashab told Rebbetzin Shterna Sarah that “for Mussia (the Rebbetzin) I suggest one of Reb Levik’s children…”. It is also known that from the day of the Rebbe’s birth, the Rebbe Rashab showed a special interest in him, sending no less than six telegrams on that day with instructions concerning the birth.

However, it took quite some years until the Shidduch came to fruition. (Reb Elchonon Dov (“Chonye”) Morozov is said to have received a letter from Rebbetzin Shterna Sara, stating that she is anguished over the fact that her esteemed husband’s wish is not being fulfilled. She added that she often visits his Ohel to daven so that the shidduch should advance.) The first time the Rebbe met the Frierdiker Rebbe was Sukkos 5683, after that meeting it took another year until the Rebbe met the Rebbetzin for the first time, while the Frierdiker Rebbe and his family were in the “Datche” city of Kislovodsk.

Around thirty days before the Chasunah, the date and location were decided for the wedding. The day was set to be Yud Daled Kislev in Yeshivas Tomchei Temimim of Warsaw. The delayed decision was due to the fact that they were still unsure whether the Rebbe’s parents would be able to attend, as the Frierdiker Rebbe explained to Rabbi Kramer in a letter.

Already days before the wedding the Chassidim were getting excited for the upcoming day. The wedding was obviously a very special and joyous event. The entire wedding from beginning to end was documented by Rabbi Elye Chaim Althois, the Rebbe’s Shadchan & Shomer, in a letter he sent to his family which remained in Russia at that time (this was later translated into English). Further documentation is by Rabbi Yisroel Gordon, recollections of his father Rabbi Yochanan Gordon’s reports of the wedding. Even after the wedding was over the celebration continued with the Sheva-Brachos in Riga where the Rebbe and his entourage were greeted by hundreds of Chassidim.

As mentioned earlier, the Rebbe’s parents Reb Levi Yitzchak and Rebbetzin Chanah were not able to attend the Chasunah, as they lived in Yekatrinislav which was then under communist rule. Nevertheless, they were determined not to pass on such a joyous and special day. The celebration that took place in the home of the Rebbe’s parents was very joyous. In her diary from 1953, Rebbetzin Chanah looks back at the Chasunah.

Throughout the years in 770, Yud Daled Kislev was a very joyous day. Starting from Yud Daled Kislev in 5714 when the Rebbe first spoke about the day openly coining it (the now-famous phrase) “this is the day that connected me to you and you to me”. Year after year the Chassidim around the world would celebrate the day and make good resolutions in connection with the number anniversary, and it was apparent to all that the Rebbe derived tremendous Nachas from it.