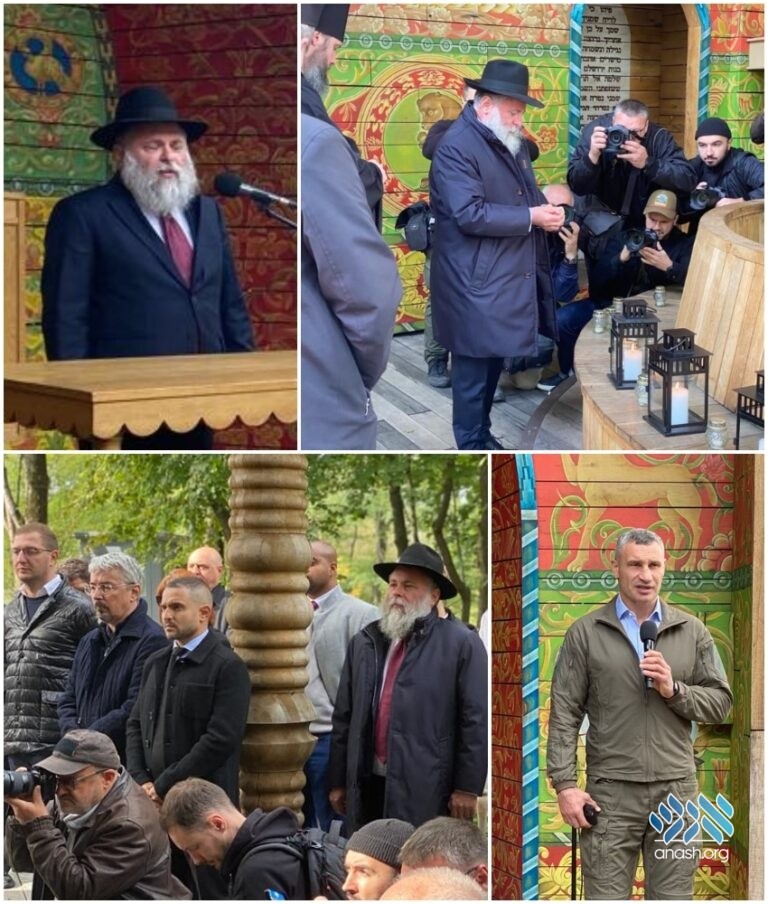 Despite the ongoing war, members of the Ukrainian government joined leaders of Ukraine’s Jewish community to commemorate the 81st anniversary of the Babi Yar massacre – where Nazis killed over 30,000 Jews.

Members of the Ukrainian government together with foreign diplomats serving in Kiev, gathered today in the main annual event to mark the 81st anniversary of the Babi Yar massacre in which tens of thousands of Jews from Kiev were murdered along with Gypsies and other Ukrainian citizens.

Mayor Vitaly Klitschko, Minister of Culture Oleksandr Tukchenko and the ambassadors of the USA, Spain, Germany, Poland, Belgium and other countries participated in the event, which is organized by the Kyiv municipality.

The Chief Rabbi of Kyiv, Rabbi Yonatan Markowitz, at the official event commemorating the 81st anniversary of the Babi Yar massacre: “As a member of a family that lost many in the Holocaust and as a representative of the Jewish community in Kyiv, I am here today with one message to the entire world: “we must not be silent of evil. In Judaism there is a commandment to remember every day what Amolek did to you”.

“The Holocaust was an event that shook the world, but even today this message must be remembered and not be allowed to be forgotten. War is a terrible thing. The terrible tragedy that happened to the Jewish people in the Holocaust and the cruel massacre that was carried out here in Babi Yar eighty-one years ago, should be engraved on the hearts of all of us”.

“Today, when Ukraine is at war for its identity, we need to remember this message. We do not make a comparison between what happened then, and what is happening today in Ukraine. But everyone must learn the lesson that we must not be silent of evil and must cooperate together to stop it”.

Earlier in the day, Ukraine’s President Volodymyr Zelensky visited the Babi Yar Holocaust Memorial. Zelensky, who is himself Jewish, laid flowers at the monument to the victims of the tragedy and placed a commemorative lamp next to the Menorah in honor of the Jews killed in the atrocity.

The European Union’s Commissioner for Neighboring Countries Oliver Wehrli, who arrived yesterday from Brussels to Kyiv for a few hours for meetings, devoted an hour of his time to specifically reach the place.

Verhali said, “It was important for me to take advantage of my arrival in Kiev for the memory of the thousands of Jews who were murdered here by the Nazi Germans.”