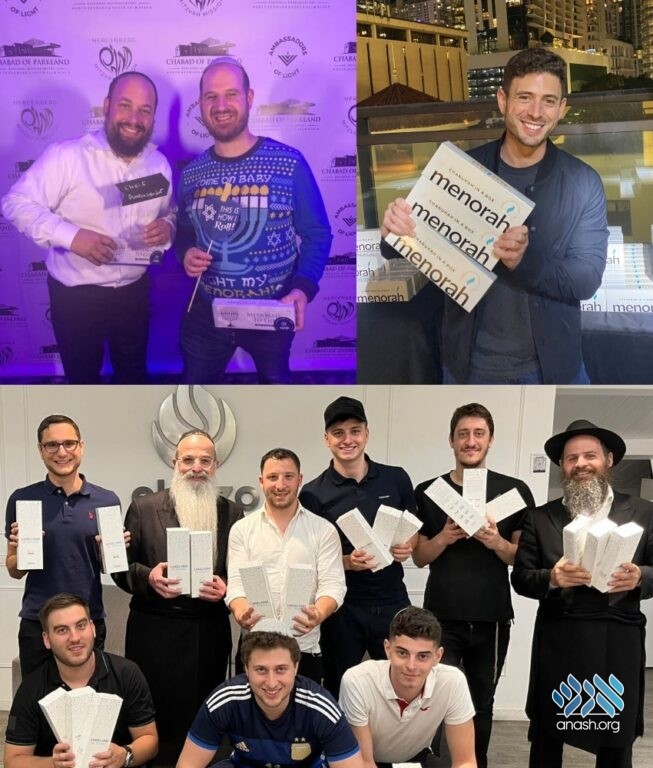 2,500 young professional spent their Chanukah distributing Menorahs to local Jews in 120 communities around the world as part of CYP’s annual Chanukah program.

A few years ago, someone walked up to Samantha Borr and asked her if she was Jewish. This past Chanukah, Samantha approached over thirty Jews, asking the same question and giving them Menorahs in her old college town of Providence, Rhode Island.

Borr, who is a part of Chabad Young Professionals in St. Petersburg, Florida, was one of approximately 2,500 young professionals who spent their Chanukah distributing Menorahs to local Jews in 120 communities around the world as part of CYP’s annual Chanukah program – Ambassadors of Light.

This year, a special grant by Yudi Hercenberg of the Hercenberg Mitzvah Mission gifted 40,000 Menorahs to Chabad Young Professional chapters worldwide, albeit with one condition, the Young Professionals were charged with giving out menorahs to friends, family, or any other Jew they met who did not otherwise have one.

Hercenberg is a longtime proponent of the Mitzvah Ambassadors concept, including previous Matzah and Mezuzah initiatives. “If a Rabbi approaches you to do a mitzvah, you might think ‘that’s his job,” explained Hercenberg, “but if your best friend approaches you, it’s because he’s passionate about it.”

Indeed, the Ambassadors of Light campaign was a massive success, with over 40,000 menorahs distributed in 120 communities worldwide by the CYP ambassadors, who ensured that the Jews in their lives were given a meaningful Chanukah. But it did not stop there. Along with just their immediate family and friends, many of the ambassadors, like Samantha, took their mission even further.

While visiting her old college town of Providence, Rhode Island, Samantha had an hour to spare and decided to try and give out some of the menorahs she had brought with her, hoping to give out at least a few. She was shocked when she had given out all ten within an hour. Inspired, Samantha called her Rabbi Mendel Lebovics of CYP St. Petersburg, Florida, who reached out to Rabbi Mendel Laufer of Chabad at College Hill in Providence to see if he had additional menorahs for her to distribute. Within twenty minutes of the call, Samantha was armed with extra menorahs and an enthusiastic attitude.

Everywhere she went that day, Samantha made sure that no Jew went unnoticed. A man working at the AT&T store, a woman at Coffee Bean, a college student out for a jog, and many others lit a menorah in their home that night. “It was so powerful to speak with all these Jews because that’s what happened to me! Someone came up to me and asked if I was Jewish,” said Samantha.

“I myself didn’t light the menorah for many years for no reason other than laziness and not being used to it,” said Samantha. “I know all it takes is one Chanukah to bring it back, and it was so empowering to be the one to do that for these people.”

In addition to bringing the light of Chanukah to 40,000 Jews who otherwise wouldn’t have lit the Menorah, the campaign also impacted the Ambassadors themselves. Being on the giving end can transform a young professional’s relationship with their own Jewish identity making it more personal and meaningful. “Playing ‘rabbi’ and knowing I could add light – literal light, and do something important to enhance other people’s holiday was amazing,” said Nina, a Young Professional from Bellevue, Washington, “It was so meaningful to know I made a difference.”

For Samantha becoming an ambassador wasn’t just about a one-time campaign it has become a way of life, “being an Ambassador made me want to start keeping Shabbat candles in my purse, she shared.”

“The Ambassadors of Light initiative embodies the Rebbe’s vision for Shlichus,” said Rabbi Moshe Kotlarsky, Vice- chairman of Merkos L’inyonei Chinuch, “Inspiring the younger generation to not only practice their own Yiddishkeit but to share it with others is the only way we can touch every single Jew.”

Click here to message Merkos 302 on Whatsapp for any questions, comments or sponsorship opportunities.