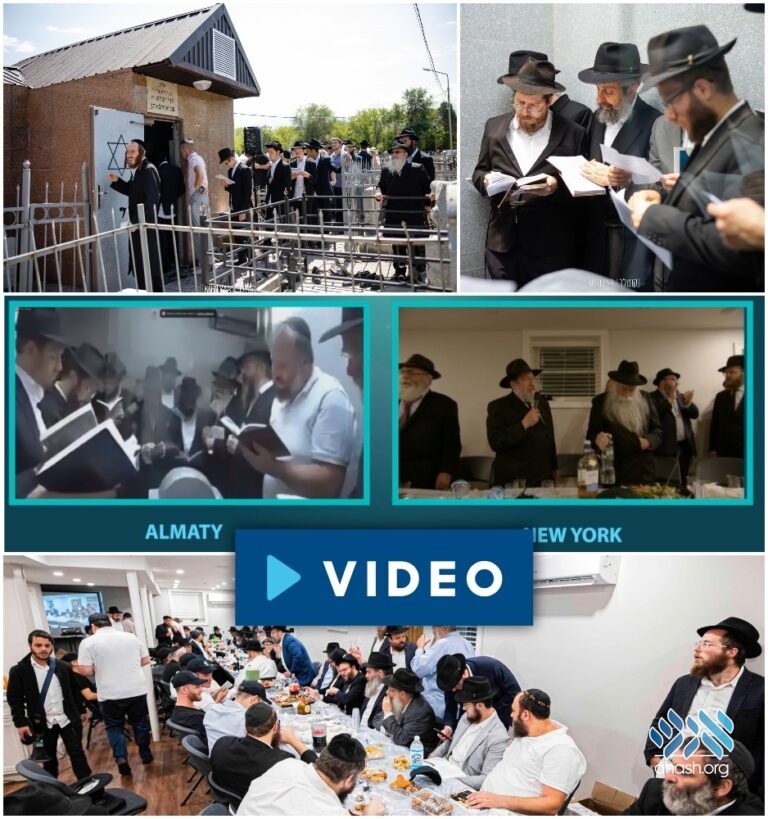 After the annual Chof Av charter from New York as canceled at the last minute, a farbrengen was set up to take place by the Ohel and in Almaty at the same time. The highlight was an emotional seder niggunim.

Chassidim in New York and Almaty joined together virtually on Tuesday night for a farbrengen and an emotional seder niggunim.

Many of the participants in the New York farbrengen, which took place near the Rebbe’s Ohel, were those that had booked tickets on the annual Chof Av charter flight. The flight was canceled last minute, and the organizers scrambled to find a different, yet proper way to mark the auspicious day.

“We had plans, but Hashem planned otherwise,” wrote the organizers of the charter, and invited all those who booked tickets, or who had wished to book tickets, to join a farbrengen near the Rebbe’s Ohel.

Addressing the farbrengen were a number of rabbonim and mashpi’im, alongside members of the Bais Shmuel Shul, which had organized the charter. Among them was R’ Dovid Rogatsky, who emotionally called for achdus among chassidim, and asked for all those participating in-person or virtually to participate in the campaign being held by Chabad of Kazakhstan.

Rabbi Moshe Pinson, president of Bais Shmuel, also called on chassidim from across the world to join in the Chof Av campaign b’harchava – in abundance, as the Rebbe requested.

As the farbrengen continued, R’ Dovid Rogatsky asked that they join in the seder niggunim which was about to be held by the Shluchim and guests in Almaty, at the holy tziyun.

“Physically, you may be far, but in spirit you are right here with us,” called out shliach Rabbi Yeshaya Cohen from across the world. “Please join us and become partners in the work of Reb Levi Yitzchok – spreading Torah and mitzvos.”

At the conclusion of Rabbi Cohen’s words, the camera crew entered the holy tziyun with the shluchim. Emotionally, and wit tears flowing freely, the chassidim from the two sides of the globe joined in the nigunim, concluding with the rousing hakafos niggun of Reb Levi Yitzchok.

R’ Dovid Rogatsky then asked the assembled in New York to give over their names to the shluchim, who davened for each one at the tziyun for health, shidduchim, success and everything they need.