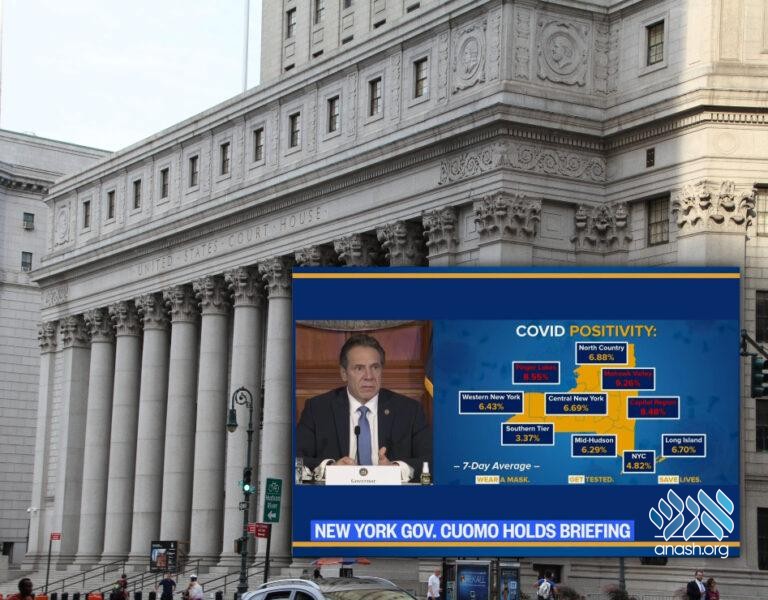 As New York rapidly approaches the 9% positivity rate which would trigger a second lockdown, the Second Circuit Court of Appeals gave down a final ruling striking down Governor Andrew Cuomo’s limits on religious gatherings.

As New York rapidly approaches the 9% positivity rate which would trigger a second lockdown, the Second Circuit Court of Appeals gave down a final ruling striking down Governor Andrew Cuomo’s limits on religious gatherings.

The Second Circuit Court of Appeals’ ruling declaress that Governor Andrew Cuomo’s Executive Order restricting attendance at houses of worship “discriminates against religion on its face.”

The United States Supreme had previously issued an injunction against the 10 and 25 person limitations imposed by Cuomo, pending the Agudah’s appeal. On December 18 — the last day of Chanukah – the Agudah’s appeal was heard by the Second Circuit Court of Appeals. The case challenged not only the 10 and 25 person limits but also the 25% and 33% capacity limitations as well.

The Court observed that it applies strict scrutiny to assess whether a government policy impermissibly “‘devalues religious reasons’ for congregating ‘by judging them to be of lesser import than nonreligious reasons.’” The Court found that Governor Cuomo’s Order was not neutral towards religion: “To determine neutrality, we begin with the [Order’s] text, ‘for the minimum requirement of neutrality is that a [government policy] not discriminate on its face.’ The Order fails this basic standard by explicitly imposing on “houses of worship” restrictions inapplicable to secular activities.”

“The Court also found that Governor Cuomo’s Order was not generally applicable: the Governor has selected some businesses (such as news media, financial services, certain retail stores, and construction) for favorable treatment, calling them “essential,” while imposing greater restrictions on “non-essential” activities and religious worship. That lack of general applicability is also subject to strict scrutiny.”

Further, although the Governor asserts that “all” activities not restricted by the Order present lesser risks of COVID-19 transmission than religious worship, he has never claimed that the unrestricted category of “essential” activities was created based on transmission risk. Instead, “[t]he only explanation for treating religious places differently seems to be a judgment that what happens there just isn’t as ‘essential’ as what happens in secular spaces.”

Finally, the Court expressed skepticism about Cuomo’s repeated statements trying to justify the restrictions on worship because of the special risk they posed:, noting that “Recent public statements from the Governor cast some doubt on his experts’ claims that religious worship is self-evidently riskier than secular activities. In an address on December 11, 2020, the Governor presented a chart showing that, per “Statewide Contact Tracing Data,” “Religious Activities” were the exposure source for only 0.69% of new COVID-19 infections in the state from September through November. This figure is comparable to, or lower than, the equivalent proportion for categories of activity deemed “essential”: 0.84% for “Manufacturing,” 0.66% for “Construction,” and 0.55% for “Professional Services.”

According to Avi Schick, who represented the Plaintiffs challenging Governor Cuomo’s Executive Order, “this decision has important ramifications that go way beyond COVID restriction. It is a clear statement from the Second Circuit that government can’t disfavor religion merely because they see no value in it. I expect that this decision will stop future governments from imposing rules that restrict religion, and also sets a standard that we can rely on in court in those instances when government does not heed that lesson.”