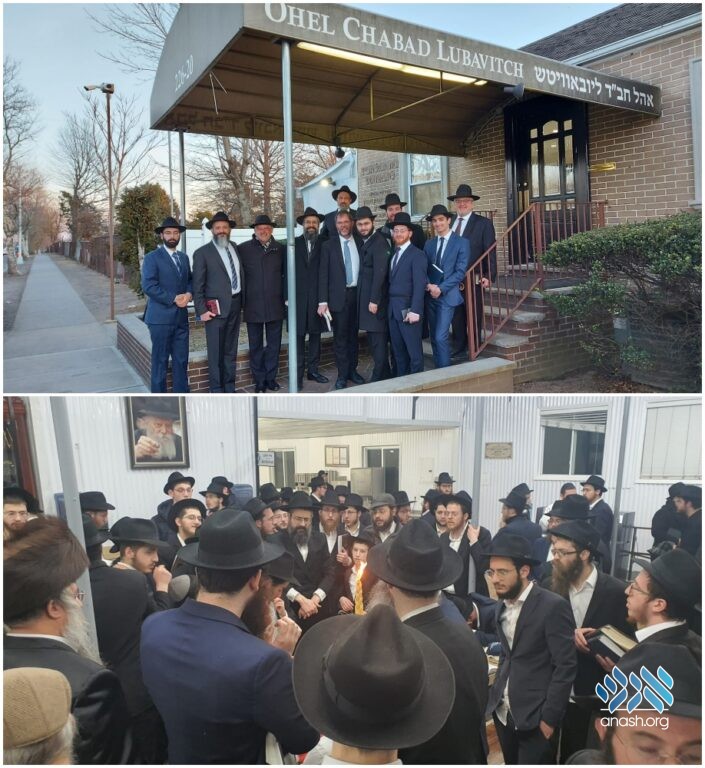 Shabbos Chazak at the Ohel was a busy Shabbos, with trips from two communities and a Yeshiva, including one group from Agudas Yisroel of Toronto.

Shabbos Chazak at the Ohel was busy with trips from two communities and a Yeshiva. From West Hartford and as far away as Toronto, the groups came to spend Shabbos with the Rebbe in a way that is only possible at the Ohel.

“When you come here, there is nothing but the Rebbe, it is all Rebbe,” says Rabbi Mendel Kaplan of Chabad Flamingo, Ontario who was at the Ohel with a group of eleven guys from Agudas Yisroel of Toronto. Rabbi Kaplan became connected with some members of the yeshivishe community based near his Chabad House and at their request, he farbrengs there a couple times a year. This is the fourth time Rabbi Kaplan has brought a group from Agudas Yisroel to spend Shabbos at the Ohel.

“This is the Ground Zero of ruchniyus,” says Rabbi Kaplan who has brought tens of groups to visit and spend Shabbos at the Ohel over the last eighteen years. “When a Yid spends a Shabbos in the mechitza of the Rebbe, it is transformative in ways beyond our understanding. I have seen this time and again and one can’t argue with success.”

With the exception of a few hours of sleep, the groups spent twenty-six hours farbrenging, learning, and davening. For many it was their first time spending Shabbos at the Ohel. Though they may have visited before, the power of spending a Shabbos immersed in the atmosphere of the Ohel gave them a chance to truly absorb the experience. “A Shabbos at the Ohel with your community is different from any other gathering or getaway. It’s about reconnecting and being together with your community by the Rebbe on a whole different plane,” said Daniel Cowen, a participant of the West Hartford Anash group.

The groups headed home on Motzei Shabbos, “uplifted and rejuvenated,” as another participant put it. For as Rabbi Kaplan says, “There is nothing more powerful or spiritually rewarding as bringing people to the Ohel and especially for a Shabbos.”