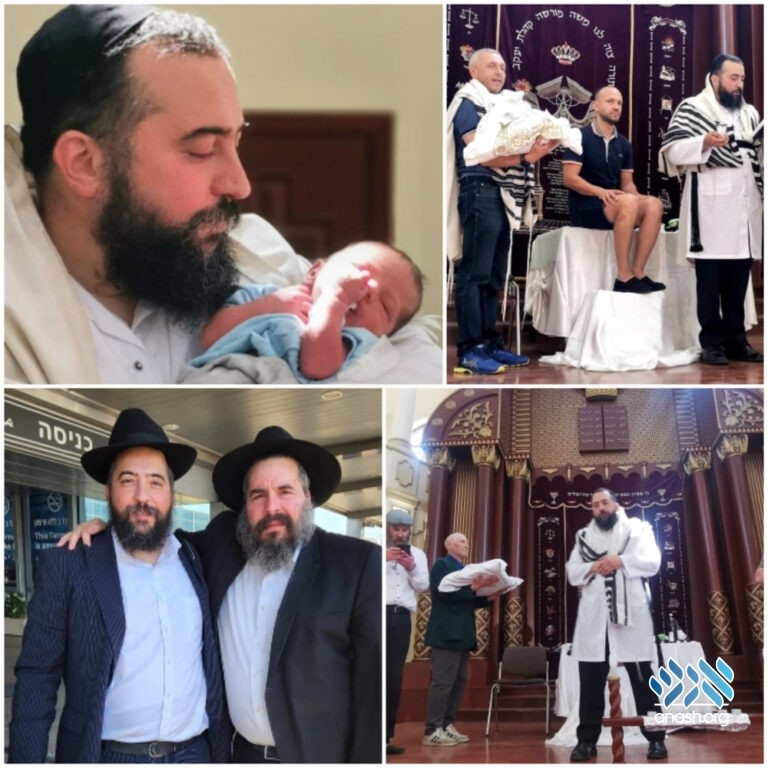 A mohel from Mariupol travels thousands of miles to ensure a Jewish baby has his bris on time, despite all of the challenges the country is currently facing.

Masha had only one request of Rabbi Moshe Moskovitz last month in the Kharkov synagogue. She was due to have a baby boy in a few weeks and wanted to be sure that no matter what her newborn son would have a brit mila at 8 days old. Last week Masha gave birth to her son and made sure to call the synagogue to ensure her request would be fulfilled.

A few months ago that would have been easy to arrange but with Kharkov under intensive bombing and no mohel in Ukraine, Rabbi Moskovitz had to step up to the challenge. The first step was for Rabbi Moskovitz to find a mohel who would be ready to travel thousands of kilometers in the midst of a war! How amazing it was that the shliach of war-torn Mariupol, Rabbi Mendel Cohen, who is also a mohel, was brave enough to take up this unique mitzva despite the dangers and distance. Rabbi Moskovitz then had to arrange the logistics and get him on a flight from Israel to Moldova. Rabbi Cohen had to be driven over 20 hours in a van crossing the border through the whole Ukraine to Kharkov, a mere 40km from the Russian border.

News spread fast that a special occasion and ceremony would be taking place in the synagogue on Thursday morning. Masha, who was once a student in the Jewish school and whose older son also studied in school and was a camper in Camp Gan Israel in Kharkov, was very emotional as she walked up the stairs to the synagogue. She understood the importance of bringing her son to do his brit mila at the right time and was deeply grateful to Rabbi Moskovitz, the Kharkov community, and Rabbi Mendel Cohen for traveling thousands of kilometers to make her dream come true.

The crowd stood in awe, ignoring any background sounds of artillery fire and shelling in the distance. The small cry of the baby was followed by tears by all those watching the moment. “And he should be called in Israel, Moshe.” In the middle of the war with true self-sacrifice, a young baby boy becomes part of the Jewish community continuing the chain from Avraham Avinu.