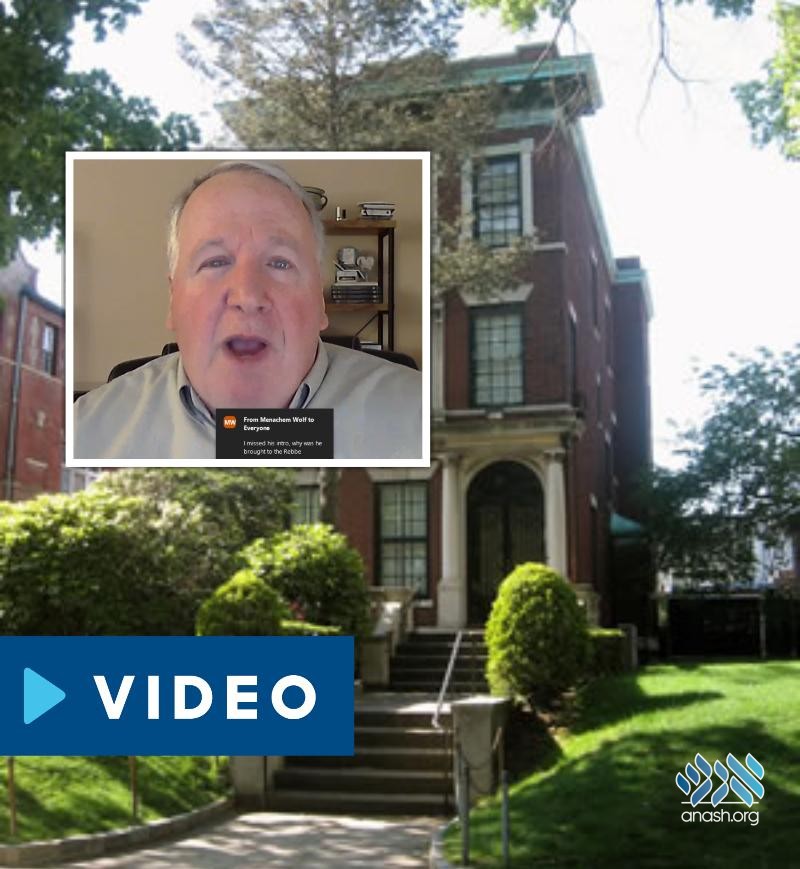 Dr. Warren Joseph, a prominent podiatrist who treated the Rebbe in 1992, joined the ongoing Zoom farbrengen to share his experience for the first time.

“This is not a story I’ve told, other than to close family members and friends… it’s a 26 year old story.”

It’s 8:00 pm on Wednesday evening, and several hundred shluchim, who are tuned in to the Zoom farbrengen that has been going non-stop since Motzei Shabbos, sit up straighter in their seats.

The news travels quickly – “A doctor who treated the Rebbe is sharing his experience for the first time!” Within minutes, the meeting has reached its capacity of 1,000 participants.

“I was raised in the reform movement during the 1960s,” Dr. Warren Joseph begins his tale. “As I’m sure most of you are aware, it was more of a political movement than a religious movement. I heard sermons about why we should send money to Israel, and civil rights; I had a strong upbringing culturally, but knew very little about the mitzvot.”

In late 1991, Dr. Joseph was a faculty member at the Pennsylvania College of Podiatric Medicine. One day he received a call from his friend, a podiatrist in New York, who asked him to travel to Brooklyn to see an important patient who had an infection in his foot.

New York is far, Dr. Joseph protested; let him come to Philadelphia! No, his friend responded, you don’t understand. This man is one of the most important rabbis, the Lubavitcher Rebbe, Rabbi Schneerson.

Unconvinced, Dr. Joseph insisted that the patient should be the one traveling to see the doctor; after some back and forth, he agreed to go to Brooklyn after a dinner lecture he had scheduled in Manhattan for two weeks later. Perturbed by the strange phone call, Dr. Joseph paid a visit to his friend and mentor, a colleague who was raised in an Orthodox community in Brooklyn.

“I said, ‘this guy just called and he wants me to come out to Brooklyn to see some important rabbi, maybe you know who it is?’ My friend asked me his name, and I said, ‘something like Shneorman, or Schneerson?’

“He said, ‘you were just asked to go and see the Rebbe?!’ I said, ‘Yeah! That’s him, the Lubavitcher Rebbe!’ His mouth dropped open. ‘Do you have any idea who this is, who you’ve been asked to see?!’”

Dr. Joseph’s friend recounted his experiences as a child, when he stood in line to get dollars from the Rebbe. He shared that his family credits the Rebbe with saving his uncle’s life.

Fast forward two weeks; Dr. Joseph was in Manhattan, giving a lecture over dinner, when something strange happened. A sought after orator, Dr. Joseph can give lectures of 4 hours without so much as straining his voice; that night, however, by the end of his speech, he was so hoarse he was left croaking!

“This began the whole bizarreness of this night. I go outside the restaurant, and a car picks me up, and there are two lubavitchers in the car dressed in their traditional garb. I sit in the back and we drive over the Williamsburg bridge. I’m seeing all the Satmars walking around and I’m thinking, ‘wow, I’m not in Kansas anymore!’

“Here I am, a stranger in a strange land, I have no voice, and these two rabbis are just regaling me with stories about the Rebbe, on and on, and I’m just intrigued. I’ve never believed in this sort of thing.

“I’m ushered in to 770 and met by Rabbi Groner and I start croaking my greetings to him. The first thing he did, he called over one of his associates and told him, ‘Go get this doctor some chicken soup!’”

Some time after he finished his soup, the Rebbe was ready to see him.

“I walked in to see him and sat down across from him in an armchair, and the first thing I noticed is something you have all heard about, and some of you have certainly experienced: his eyes. His eyes did not look at you, they looked into you! It was a very unreal experience.

“What I found interesting was that I was there to see him, to treat him, but he spent almost the entire time talking to me, asking me questions. ‘Where are your people from? What is your background?’”

“I spent probably half an hour in his study, I took care of him from a medical standpoint, and after we finished he asked me, ‘Is there anything I can do for you?’”

Dr. Joseph told the Rebbe about his two young sons, and asked for a blessing for them and for his wife. After Rabbi Groner took down the names, he was escorted out, put in a car and driven back to his hotel.

At sometime around midnight, Dr. Joseph called his wife and began croaking out the story of his unusual evening to her on the phone. To his surprise, she began crying and told him that something had changed; she could hear something different in him.

“People talk about auras and energies and that sort of thing, but I don’t believe in that – I call them ‘woowoo’ people. But the Rebbe has an aura, an energy about him that I had never seen before and I have never seen since. I didn’t know the term tzadik at the time, but I understood it after I started researching a little bit.”

Two weeks later, Dr. Joseph returned to 770 to follow up on treatment. It was chof daled teves, and the Rebbe was davening when he arrived. Rabbi Groner brought the two doctors – he had brought along an associate this time – downstairs.

“All of you were down there – it was just a sea of black coats, and it was like the red sea parting as they pushed us towards the front. They placed us right at the front of the shul, right in front of the Rebbe as he was speaking, and we were the first in line to get the dollars. I still have those dollars.

“When I got back to normal life, I was fascinated by what had happened to me. I started reading whatever I could about the Rebbe. I bought one of his books on Torah study. We started lighting candles on Friday night, started having challah and saying Hamotzi, because we thought it was important to bring our children up with more of a Jewish understanding.

“We ended up enrolling our sons in a conservative preschool, and it was quite an experience for them- they got quite a Jewish education. We started going to shul on Shabbos and became regulars. It was the first time – the Rabbi would give a sermon and it would be about the parsha. It was a totally different experience than we had grown up with.”

Dr. Joseph’s encounter with the Rebbe had a profound impact on the way he and his wife raised their sons, and on how the family came to view and observe Yiddishkeit.

“This is what happened to me when I got to have the honor of being in the presence of the Rebbe. I now know what an honor it is!”

As he nears the end of his tale, the shluchim are clearly moved by what they have heard. As it happens, Dr. Joseph is sitting shiva for his mother now, and the words “Hamakom yenachem eschem” are being murmured in a thousand different homes around the world. COVID has taken away the ability to mark his mother’s passing in the usual way, but Dr. Joseph remarks that sitting with 1,000 Chabad Rabbis is ‘about the greatest shiva someone could have.’

After a moment’s pause, he remembers one last thing.

“As I was in the car on the way back to the hotel on that first night, I realized that I still had the kippah on that I saw [the Rebbe] with. To this day, I still use that kippah when I’m in shul.”

Dr. Joseph chuckles. “I apologize for taking it, but you’re not getting it back! It’s an everlasting reminder of my time with him that I still hold dear.”