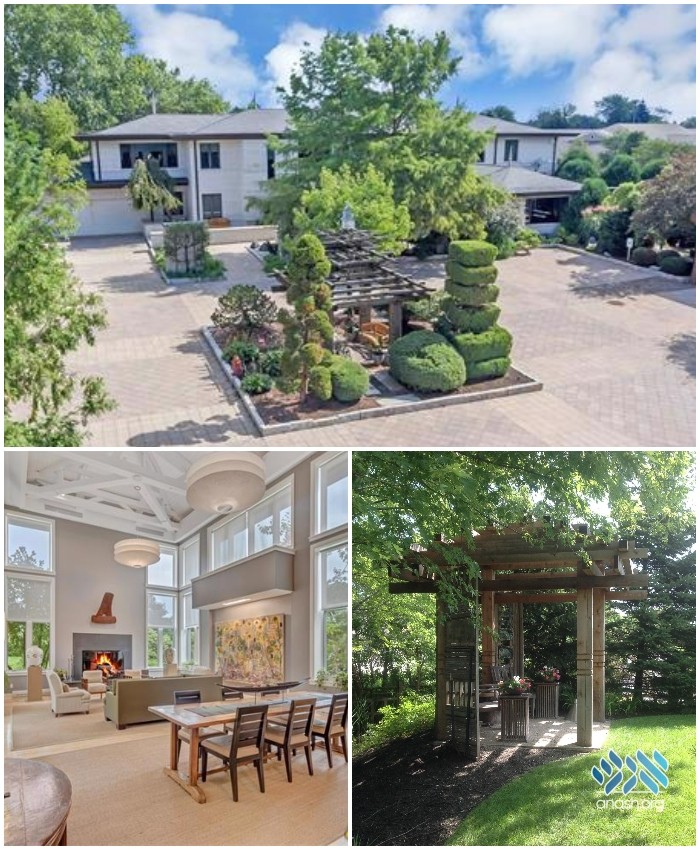 Bnai Zedek in Kenosha is purchasing a light-filled facility nestled in 1.5 acres of tranquil gardens, gazebos, and trails to replace an aging synagogue that has been shuttered since 2014.

The ebbs and flows of Jewish life in smaller cities and towns across North America since the late 19th century have seen the rise and fall of many a synagogue structure and once-thriving community, with many now residing only in the musty halls of local historical societies or in the form of nearly forgotten cemeteries.

Not so in Kenosha, Wisconsin., where a plucky community bucked the trend by partnering with Chabad-Lubavitch and is now purchasing a light-filled facility nestled in 1.5 acres of tranquil gardens, gazebos, and trails to replace an aging synagogue that has been shuttered since 2014.

“It’s like a gift from G‑d,” says Gail Baum, who lives part-time in a condo in Kenosha and has come to appreciate Judaism in a new way since she and her husband, Ron, became acquainted with the congregation, and their leaders, Rabbi Tzali and Rivkie Wilschanski. “I love learning from Tzali and participating in the singing at their Shabbat table. It has enriched my life.”

She says their efforts will now be “energized” by the acquisition of the new property, which will now house the 118-year-old congregation.

Located on the blustery shores of Lake Michigan, halfway between Chicago and Milwaukee, Kenosha was settled in the mid-19th century by a hardy bunch of New Yorkers searching for fresh opportunities.

Jewish immigrants had joined them by the 1880s, and a community soon formed and organized under the banner of Bnai Zedek. In 1904, they appointed their first spiritual leader and shochet, Rabbi Louis Lepkovsky, and the congregation met for services in his and others’ homes. Less than a mile from the lakefront, the area was predominantly Jewish, with a Jewish bookstore, kosher butcher shop and other Jewish establishments.

The community grew steadily, and in 1911, a building fund was established. The first donation, $500, was given by Zalmon G. Simmons, mayor of Kenosha and owner of the locally founded Simmons Bedding Company, who, despite his very Jewish name, denied being Jewish.

The synagogue, which cost an estimated $10,000 to $15,000, was completed just one year later, with soaring stained-glass windows, ample seating for more than 200, and a second-story women’s gallery, as was common.

Reporting on June 19, 1911, on the commencement of construction, the Kenosha Evening News reported that there were 32 local Jewish families, totaling 100 people, and noted that the contract stipulated that all work be finished before 5 p.m. on Fridays and not resume until after Shabbat. “This is the first contract ever made in Kenosha which carried this provision,” the report concluded.

The first wedding in the new building was of Ida Lepkovsky, daughter of the rabbi, to Louis Berkovitz. The first bar mitzvah was that of his son, Samuel, who went on to become a renowned nutritionist and researcher.

In 1918, after the Spanish Flu Epidemic claimed the lives of three local Jews, the decision was made to consecrate a local cemetery, as before that bodies had to be transported to Chicago for burial.

By 1920, the Jewish community grew to include 120 families, and a sisterhood was soon formed.

Through the 1960s, the downstairs social hall also doubled as a Hebrew school, which had as many as four classes.

Over the years, the Bnai Zedek community slowly shrank as children of the original immigrants moved north to Milwaukee and south to Chicago in search of higher education and better jobs. Many of those who remained behind slowly drifted from the traditional observance of their parents.

The neighborhood also changed, as people moved further west, away from the smaller, older homes close to the wharves and factories along the lake.

As people left, some others came, including Holocaust survivors. And as the northern edge of Chicago’s suburban footprint edged closer and closer to the Illinois-Wisconsin state line, Chicagoans began to look toward the Wisconsin city as a tax-friendly exurb.

By the 1970s, the synagogue, which had not had a rabbi for decades, was still functioning on a weekly basis, led by community members, most notably Joe Kassel and Dr. Stanly Rosen.

Noting the lack of locally available kosher food or a critical mass to form a daily minyan, a column in the Jan 20, 1980, Kenosha News observed that “it is not surprising, then, that B’nai Zedek’s current membership currently numbers about 25 families.”

Yet, the article noted, the “congregation represents something of importance to Kenosha’s Jewish community.”

And it was this “something” that kept the congregation alive during the lean years of the latter half of the 20th century.

Upon Kassel’s passing in 1980, Rosen reached out to Rabbi Yisroel Shmotkin of Lubavitch of Wisconsin requesting a rabbi who could conduct a traditional funeral.

Shmotkin sent his associate, Rabbi Yoseph Samuels, who had recently joined the team of Lubavitch of Wisconsin.

“From that funeral, I got to know the community, a very heimishe group, many of whom knew Yiddish” says Samuels, who still visits Kenosha more than 40 years later. “We started holding classes in people’s homes and doing other activities, including a Hebrew school.”

After Rosen moved away in the mid-1990s, Samuels began spending the High Holidays in Kenosha to conduct services in the cavernous but mostly empty synagogue.

Rosen’s position as president was filled by Ron Sanders, who moved to town in 1989 from Chicago. Raised with little religious observance, Sanders had spent 13 years in the military and owned a successful CPR training company.

“A guy from Bnai Zedek called me up and invited me to a class with Rabbi Samuel,” recalls Sanders. “I had expected Orthodox Jews to be overbearing and preachy, but these Chabad rabbis were nice. My wife was not Jewish at that time, and they were so inviting.”

As president, Sanders thought long and hard about how to revitalize the congregation. He reached out to various national organizations in search of a rabbi but received few responses.

Then Samuels suggested that they bring down a Chabad couple. In 2007, Rabbi Tzali and Rivkie Wilschanski became the co-directors of a new entity called Bnai Zedek Chabad.

“Rabbi Samuels said the main criteria is that they be nice,” says Sanders. “And he was absolutely right.”

Beyond the synagogue, the Wilschanskis reached out to unaffiliated Jews all across Kenosha and Racine counties, held children’s events and women’s programs, and hosted countless Shabbat dinners in their home.

And the needle began to move.

Younger people began attending synagogue, there was hope in the air, and expectations mounted.

“We were so welcomed,” says Ron Baum, who is originally from the Detroit area. “We love the classes, and of course Rivkie’s food!”

But things were not simple.

The old Bnai Zedek building, just about to celebrate its 100th year, was aging. Poorly insulated and inaccessible to people with wheelchairs and strollers, it was becoming a liability and a money drain.

According to Sanders, the choice was simple: “We could hold onto the building until we would be forced to let go of it because we were bankrupt, or we could sell it while we still had money in the bank.”

In 2010, services moved into the Wilschanski family home, several miles inland and closer to where many regular attendees lived.

And in 2014, the building, which has been a registered landmark since 1999, was sold to a Chicago-area developer, who agreed to maintain and respect its Jewish character.

Meanwhile, Chabad activities grew, and the search for a new home for the venerable congregation continued.

Properties were purchased and plans were drawn up in late 2019 just prior to the Coronavirus pandemic. By the time the world returned to normal, prices had risen to the point that the project was unfeasible for the modest community.

“There are maybe a thousand Jewish households in these two counties,” estimates Rabbi Wilschanski, “and we know several hundred of them. The price tag was entirely out of our range.”

The Colergét Conference Center, a light-filled facility nestled in 1.5 acres of tranquil gardens, gazebos, and trails, was for sale. The building and grounds reflect the creator’s love of Asian architecture and landscape and would be a perfect fit for the community.

A below-asking-price offer was made and accepted, and Chabad leadership shifted into high gear to raise the necessary funds to cover the deal.

Recognizing the history of Colergét, Chabad will continue to host several events for the broader community each year on the property and aims to maintain the extensive landscaping to the best of its ability.

And the prospects the property provides are exciting. “Everything was created to set a tone, and bring you into a calm and relaxed space,” says Wilschanski. “We hope that this will really become a community center, where people will feel at home, welcomed and comfortable to celebrate, connect and reflect.”

Those wishing to contribute toward the purchase of the new center may do so here.