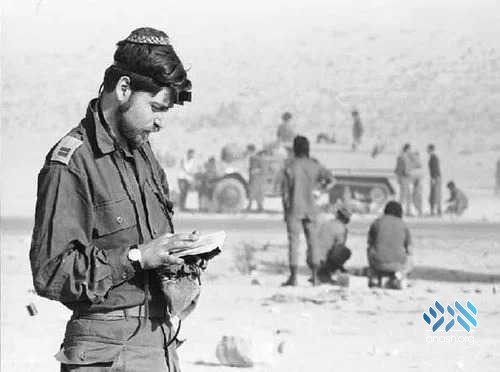 A promise made 47 years ago by a Soldier standing over his deceased friend in the middle of a raging battle was upheld thanks to the commitment and dedication of Lev Chabad, Israel.

In the courtyard of the Wolfson Hospital in Holon, dozens of people gathered to daven on Yom Kippur. Each one with their mask covering their face and their machzor held tightly in their hand. The crowd included Doctors, nurses, patients, and family members, all trying to tap into the holiness of Yom Kippur despite the strange circumstances. Some heads were graced with velvet yarmulkas, others with knit kippas, and yet others who came without any head covering and had grabbed one from the entry table. It was the perfect representation of the diversity, and unity, of Am Yisroel.

The sun had already set, and the Tefilla had reached its climax. The cries of Shema Yisroel echo off of the walls surrounding the courtyard, filling the night sky with charged emotion. The clear blast of the shofar rings out, a cry filled with prayer and hope.

Suddenly, a voice rings out from across the courtyard. “Have they already blown the Shofar?”

The voice belongs to an elderly man in a wheelchair who is pushing himself full speed in the hopes to participate in the tail end of the Tefilla.

When he was informed that he had missed it by just a few moments, he was devastated.

Word got through to the Shliach that someone had missed the shofar blowing. He immediately made his way over to him and quickly blew the tekia, no questions asked.

The elderly man was touched beyond words and immediately began to cry.

Through his tears, he related that he grew up on a secular kibbutz and had never observed Yom Kippur. In the year 1973, he was called to the battlefield to fight in the Yom Kippur War. After witnessing the death of one of his fellow soldiers in the middle of the Yom Kippur Davening, he committed to take upon himself to fast on Yom Kippur in his friend’s memory.

He didn’t always make it to Shul for the davening on Yom Kippur, but he always completed the fast in its entirety. And, whenever he was able to, he always tried to go to shul for the shofar blowing at the conclusion of the fast.

This year, he found himself in the hospital. He had spent the entire fast in his bed and resigned himself to the fact that this year he would not be able to participate in any of the tefilot and wouldn’t even merit to hear the shofar blowing.

“A few minutes ago,” he continued, “A nurse came to me and informed me that Lev Chabad had organized a minyan in the courtyard. I immediately rushed to join everyone, and was absolutely crushed when, upon my arrival, I realized I had missed the shofar.”

By now, everyone gathered had tears in their eyes.

“Thank you, Rabbi,” he said in a voice filled with emotion. “Thank you for allowing me to honor my friend’s memory this year.”

This story is one of hundreds of encounters that happened over the high holidays in the various services and programs provided by Lev Chabad in hospitals throughout Israel.

Sukkos is coming up, and despite the logistically challenging circumstances, Lev Chabad is working around the clock to make sure that every hospitalized patient will be able to fulfill the mitzvos of Yomtov in a joyful manner.

Partner with them in their important work – and you can win a Tesla or $30,000 cash!

Visit theteslaraffle.com for more information and to take part!