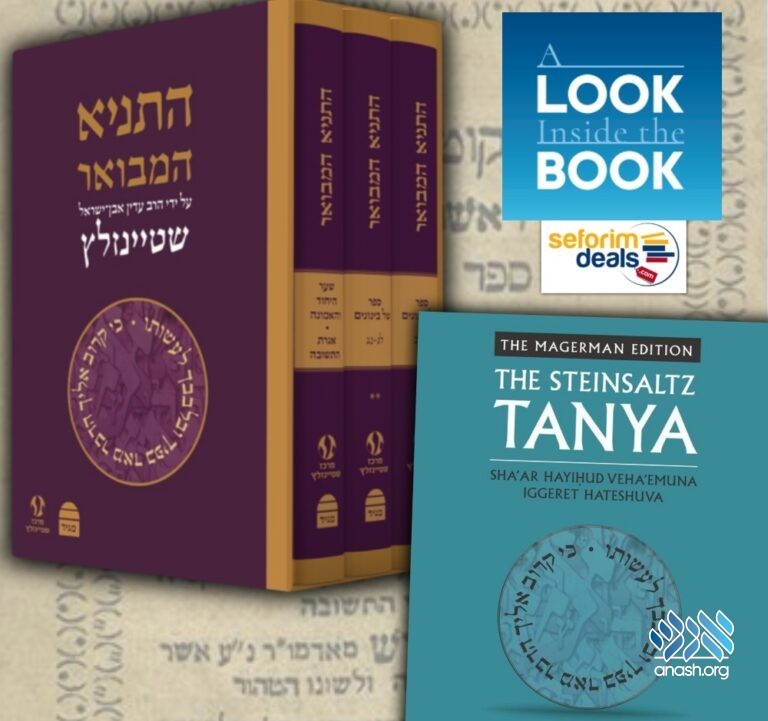 A Look Inside the Book: Rabbi Adin Even-Israel’s commentary on Tanya, both in the original Hebrew and in English, explain Chassidus in a manner accessible to those with no prior background, while offering a fresh perspective for seasoned students. A new edition makes the study even more enjoyable.

In 5691, the Frierdiker Rebbe wrote a letter to the Hebrew philologist Michael Wilensky, with a surprising proposition. Wilensky was the son of the famed chassid R. Chaim Ber Wilensky, of Kremenchuker Berelach fame, and had himself learned in Lubavitch in his youth, but had since moved away from his chassidishe roots and become an academic scholar of the Hebrew language.

In this letter, the Frierdiker Rebbe wrote to Wilensky that he wished to translate selections from Chassidus and chapters from Tanya, into European languages—including English. The Rebbe explained that he had observed that many secularly educated young people were receptive to the teachings of Chassidus, but were unable to access these texts properly.

The problem, the Rebbe explained, wasn’t just the language barrier. The terminology employed by Chassidus was also foreign to the secularly educated youth and required explanation. The Rebbe asked Wilensky if he would be able to take upon himself the task of translating and elucidating Chassidus for the youth, or if he knew anyone else who would be able to work on this.

The Frierdiker Rebbe’s desire remained unfulfilled at the time, but almost 50 years later a work began to appear that filled the void the Rebbe highlighted. The first volume of Rabbi Adin Even-Israel’s Hebrew language commentary on Tanya explaining Chassidus in a language and style accessible to secularly educated people with no prior background knowledge appeared in 5749, and was finally completed in 5773. Three volumes of the commentary, covering Likutei Amarim perakim 1-37, were published in English by Jossey-Bass publishers from 2003-2007.

R. Adin Even-Israel passed away a year ago, and his first yahrtzeit was marked last week. But the Steinsaltz Center, directed by his son Rabbi Meni Even-Israel, continues to publish new and improved volumes of his many works in conjunction with Koren Publishers.

In this article, we will review both the Hebrew and English editions of R. Even Israel’s Tanya commentary. We will begin with describing the format of the Hebrew edition, continue to do the same with the English, and then survey the content and unique features of the books, which are the same across both languages.

The content of the old and new editions is identical—what has changed is the design and layout. The non-vowelized and unpunctuated Hebrew text of the Tanya appears at the top of the page followed by the commentary, which includes a vowelized text of the Tanya blended into the running commentary.

This division significantly improves the reader’s experience, allowing one to first focus on understanding the text of the Tanya and then turn to the excursuses that add background or further explanation and analysis.

The new edition also adds introductions and summaries to every section of the Tanya, and to each individual chapter within them. Each chapter also has a title page with a chart that briefly summarizes the content of the chapter and the four chapters proximate to it, visualizing the context of the chapter for the reader.

The books are beautifully designed in the standard template Koren have created for all of R. Even-Israel’s works. The larger size of the volumes have allowed for their number to be reduced.

The commentary, edited by Rabbi Meir Hanegbi, is crisp and clear. The Hebrew is modern and quite sophisticated, which non-native Modern Ivrit speakers may find somewhat challenging.

In the English edition one volume has been published to date, covering Shaar Hayichud Vehaemunah, and Igeres Hateshuvah. The full set is expected to take some years to complete, and it will eventually include six volumes.

As mentioned, part of R. Even Israel’s commentary to the first section of Tanya was published some 15 years ago by a different publisher, but this is the first time that Shaar Hayichud Vehaemunah, and Igeres Hateshuvah have appeared in English. Curiously, the publisher’s preface to this volume ignores the earlier edition and inaccurately presents the current edition as the first time any part of R. Even Israel’s commentary has appeared in English.

The English commentary follows the same general format as the Hebrew. Added here, of course, is the English translation of the original text which appears sentence by sentence in parallel columns. The translation follows the now common format of blending a literal translation in bold font with interlaced explanatory words in non-bold type.

The translation of the original Tanya text is quite loyal to the original, but nevertheless eminently readable. Any English speaker that has tried to translate passages from Tanya while studying or teaching will appreciate this as an incredible accomplishment. To achieve this, common Hebrew expressions such as בחינת, הנה, and יתברך which lack direct English parallels are either omitted in the translation or rendered differently.

As the content of the Hebrew and English versions is virtually identical, this part of the review will cover both languages. The examples we will use to illustrate the points will be drawn from Shaar Hayichud Vehaemunah, and Igeres Hateshuvah, as these chalakim exist in both editions.

There are many commentaries on Tanya available today, mainly in Hebrew. A detailed comparison of R. Even Israel’s Tanya with other commentaries is beyond the scope of this review, so we will suffice with highlighting some of its unique features.

The primary uniqueness of R. Even Israel’s Tanya is in the area highlighted at the beginning of this article—rendering Tanya in a relatable style for modern, secularly educated people without prior background in Chassidus.

A very important element in the explanation of Chassidus is the use of meshalim to elucidate abstract spiritual concepts. For a mashal to be effective it must be relatable to the target audience, drawn from their world of knowledge and life experience. R. Even-Israel uses meshalim extensively, and, in light of the target audience, his analogies are very different from those traditionally used by mashpiim in Yeshivos—drawn from the fields of mathematics, physics and other sciences.

For example, the first perek of Shaar Hayichud Vehaemunah explains that the creation of the world is constant, and all creations are continually being brought into existence by the still reverberating words with which Hashem created the world.

The traditional mashal for the world’s continued reliance on Hashem’s creative utterances is a rock thrown into the air, which is reliant on the power of the original launch to keep it aloft and descends when that power dissipates. R. Even-Israel gives a different analogy: Flipping a light switch activates an electric current that causes the light to shine. The activation of the switch does not conclude the action, it merely initiates it, releasing the effect that continues every moment anew, sustaining the light for as long as it is present.

The Alter Rebbe continues to explain that all of existence is simply an expression of the dvar Hashem. To make this radical and counterintuitive concept—that what appears to us as stable and real physical existence is in fact a continually issued word of Hashem—relatable, R. Even-Israel draws on physics.

What appears to us as solid and dense matter, is in fact, according to physics, an astronomical number of constantly moving electrons. This example shows us that even in the physical world, superficial perceived reality can be very different than the deeper, more fundamental, reality. In perek 3 the commentary adds that even in the physical realm our eyes only perceive a narrow bandwidth of light within the electromagnetic spectrum and we remain blind to the myriad forces that comprise matter.

In Shaar Hayichud Vehaemunah, perek 2, the different ways in which the letters of the dvar Hashem are expressed on different levels, as prophetic vision to neviim and as physical creations to us in our world, are compared to the different ways sound waves can be recorded—as musical notes, imprints on magnetic cassette tapes, or indentations on the aluminum coating of a CD.

In perek 3 the Alter Rebbe brings a mashal of how the rays of the sun are undetectable on the body of the sun itself, to illustrate how the existence of the worlds is considered as absolute nothingness in relation to their Source. R. Even-Israel supplements this with an analogy from the light of the moon. Moonlight is merely a reflection of the light of the sun, yet when the sun shines at its brightest the moon is imperceptible.

Worthy of special mention is the fact that some of the excursuses that appear in the shaded gray section are very lengthy, and are really standalone essays explaining key concepts in Chassidus. Examples of this include the lengthy discussion of the importance of meshalim in Chassidus and their inherent drawbacks (Shaar Hayichud Vehaemunah, perek 8), and the discussion of the different meanings of the rule dibrah torah kelashon benei adam in different contexts (Igeres Hateshuvah, perek 4).

While intellectually stimulating and sophisticated, the commentary is not at all dry and lifeless. Chassidishe stories of Rebbes and ordinary folk are used to express and illustrate subtle ideas. In the avodah-focused perakim, such as the last chapters of Igeres Hateshuvah, the commentary gives relatable guidance for applying the concepts in practical avodas Hashem in language that is passionate, emotional, and even poetic at times.

For example, in perek 10 of Igeres Hateshuvah, true sincerity in davening is movingly explained as a deep feeling that the words being said are an expression of one’s innermost, soulful desire. This is then applied to the study of Torah and observance of mitzvos as well.

Rabbi Adin Even-Israel’s Tanya commentary explains the concepts of Tanya and applies its directives in a clear, intellectually and emotionally sophisticated way that is understandable even to those with no prior background in the study of Chassidus.

Best suited as an introduction to Tanya for intellectual people with a high-level secular education, many seasoned students of Chassidus will also appreciate the commentary for the fresh and unique perspectives it gives on Tanya’s timeless truths.