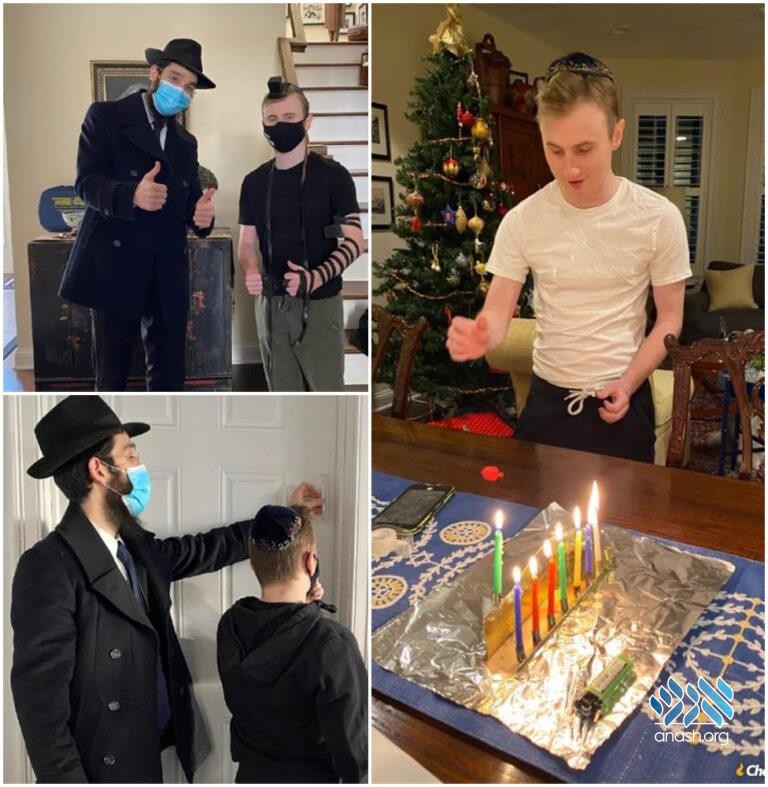 An unexpected visit by shliach Rabbi Levi Lezell to a family in Boston suburbs on Chanukah this year had their 21-year-old son light menorah for the first time in his life. But it didn’t stop there…

Sometimes, a small spark can light a fire. It needs the right conditions, of course—time, place and just the right kindling to start things going.

That’s what happened to the Hanley family in the Boston suburb of Hingham, Mass., near the end of 2020 when a Chabad rabbi unexpectedly knocked on their door.

Their story goes back to when Adrianne Hanley, now 55, was a teenager. A budding figure skater from South Africa, where she grew up in a Jewish home with lots of family nearby, she left the continent in 1983 at the age of 17 for the United States to train and compete. She had her eyes set on the Olympics—practicing 10 hours a day, she recalled—though in the end, that goal didn’t come to fruition.

Instead, she stayed in America, got married and then moved with her husband for his job in Asia, living for decades in Hong Kong, Singapore and Indonesia. They had two sons born there, Aidan, now 27, and James (“Jimmy”), 21, who attended American schools. But Jewish life and amenities then were hard to find, and the boys grew up without much tradition, and did not have bar mitzvah ceremonies.

“It weighed on me,” said Hanley. “I was always very Jewish at heart and felt strongly about it. Throughout my whole life, I thought of myself as a good Jewish person; I just didn’t do synagogue and everything. I put it off.”

The boys did, however, have the influence of their grandmother—Hanley’s 80-year-old mother, Marion Platt, who lives outside of Johannesburg. They would go to South Africa for visits, and she would come and stay with them for months at a time, cooking traditional foods and imbuing them with a sense of ritual.

“She is the Jewish mother,” described Hanley, “and a real Jewish grandmother. She bakes, tells stories, and over the years formed an especially close bond with Jimmy—an undeniable connection.”

About eight years ago, Hanley—a real estate agent and by then a single mom—moved back to the United States, settling in Hingham. Again, she found herself remote from Jewish life until one day this winter, a rabbi literally knocked on her door.

“I decided to send a Chanukah package to my neighbor,” recounted Hanley. She happened to order the package, which included a menorah and candles, online through Chabad of the South Shore, co-directed by Rabbi Levi and Mushky Lezell. After dropping off the package on the first night of the holiday, as he did for many others who were isolated during the pandemic, the rabbi decided to go next door to meet Hanley and see if she needed a menorah for herself.

Spotting Jimmy inside, the rabbi asked him if he would like to light the candles. So he did, for all three of them. For Jimmy, it was a first.

As his mother watched, she said “that moment, something was lifted from me. It brought so much clarity. It’s been a challenging year, financially and otherwise, due to the pandemic, but at that moment, I knew I was going to be OK. That 2021 was going to be alright.”

The rabbi even managed to get a Hanukkah package to Hanley’s mother in South Africa through Rabbi Ari Kievman at the Chabad House of Johannesburg. Hanley said they sent someone up personally to give it to her, reporting that “she felt incredible. She has been on lockdown in her apartment, and we haven’t seen her in so long.”

As for Jimmy, an English major in college now studying at home, the menorah-lighting was so inspirational that he took the next step. With Lezell’s assistance, the two hung mezuzahs at the Hanley home on Jan. 22. He also wrapped tefillin, another first.

The 21-year-old said “it was a life-changing moment.”

“It was uplifting. I feel like this has given me a whole new perspective on spirituality,” he said. “I am excited to see where this goes. It’s an opportunity to discover Judaism and more about myself along the way. And I want to make my South African family proud.”

Especially, he noted, his Bubba, who they call every day “just to hear her voice.” Jimmy said “she’s very inspiring.”

He explained that growing up, he went to a school that celebrated international religions and cultures; he was exposed to a great deal, though he never really had the opportunity to express his Judaism. Now he is considering learning with the rabbi, as well as joining a Birthright trip to Israel as soon they start up again. Hanley, too, is planning to visit Israel at the end of the year with her mother and other family members, as soon as travel restrictions are lifted.

Now Helping Others to Celebrate Purim

She has also started helping with local deliveries of Chabad’s “Loaves of Love” Shabbat packages, as well as mishloach manot for Purim the week before the holiday, accompanied by the rabbi and two of his young children. One drop-off was to a nearly 90-year-old college English professor who has been living alone since the start of the coronavirus pandemic and said he was overjoyed by the visit and, especially, the fresh hamantaschen. He said years ago, his mother would mail him hamantaschen from Iowa, his home state, and the treat would arrive tasty, though rock-hard. They even brought him a box of matzah because he had mentioned to the rabbi how much he likes it.

Lezell said it’s all an example of how “now more than ever, we need to look out for others. When you do your part, you can make a positive impact in another’s life, and the domino effect can be felt across the globe.”

He also noted that the Rebbe taught that “nothing happens by chance. We are meant to be where we are when we are needed.” As far as the Hanleys are concerned, Lezell pointed out that “there is truly an obvious pattern of Divine organization in the way that we met and the time in their life that we connected.”

Hanley whole-heartedly agreed. It’s not just that she is happy for her son, but for herself. It’s encouraging, she said, recognizing that had it not been for the pandemic and the slower pace at work and home, she probably would have kept postponing Jewish involvement because that’s how life is.

“Before this year, maybe I wouldn’t have been open to it,” she acknowledged. “But the rabbi came at the right place and the right time. I feel like it’s a new beginning. I am so hopeful.”

More than that, she said, “I feel blessed.”