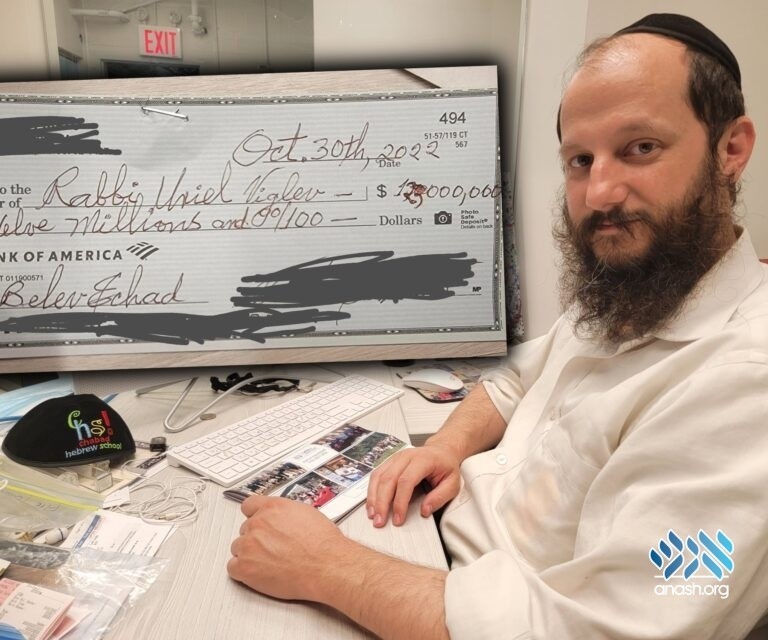 When shliach Rabbi Uriel Vigler received a twelve million dollar donation, he couldn’t believehis eyes. But what happened next left him with a life-long lesson.

About a month ago, I mailed out a letter asking people to support our programs and activities, explaining why what we do is so critically important, and the urgent need for funds.

Our mailing list includes a wide range of people, many of whom I don’t know personally, but have somehow corresponded with our Chabad center over the years and been added to our list.

I looked closer, but I didn’t recognize the name of the donor. Truthfully, I assumed it was someone playing a joke on me, so I set it aside on my desk. After all, who sends an unsolicited gift of $12 million, and in the mail no less!

The next day I Googled him, and it turned out he was a real person, an elderly gentleman living near New York. But that’s all I could find. I thought maybe, just maybe, he wants to leave us his legacy, and we would be so honored!

But as far as I know, you can’t charge a credit card more than $99,999. At least, with the system I use. It does not allow me to enter more than 5 digits.

I figured I would call Simon and speak to him on the phone, find out what was going on. So I called the number he had left, and asked if he intended to donate $12 million. He said, “Yes, of course, use it happily.” I thanked him profusely and then explained that it was impossible for us to charge his card for that much, and if I tried to do it in installments the bank would give us a hard time, so I asked if he could send a check instead. He agreed.

At this point, I was skeptical. I thought it highly unlikely he would mail us a check for $12 million, but right after Sukkot I opened the mail and there it was. I was stunned.

That’s when I started believing this might actually be true—a tremendous miracle from Hashem. I mean, what are the odds of having an unknown, unsolicited donor gift us millions of dollars? But I know miracles happen and I’m a firm believer, so I began to make a mental list of all the people I could help with such staggering funds.

I deposited the check and there it was – $12 million. I was completely overwhelmed. I wrote Simon a beautiful letter, thanking him for his generous donation and asking for a time to meet him to get to know him and thank him in person.

But then, 10 hours later I checked the account again, and the money was gone. Deducted from my account. All gone.

After speaking with my bank manager, it turns out that the check was written from an account that has been closed for over 20 years.

What Hashem (through His agent, Simon) is trying to tell me, I do not know. Nor do I have any idea why Simon would play such a joke on me.

But the more I think about it, I realize what difference does it make if I was a millionaire for 10 hours, 10 days, 10 years, or all my life? It’s all the same. It’s all fleeting. None of it comes with us to the True and Eternal World.

In fact, we all have the capacity to become millionaires. We’re here for 120 years, and whatever time, resources, and mitzvot we dedicate to serving G-d and elevating His world is the only real treasure we can accumulate and take with us. So whether we have $1, $100 or $100 million dollars, our role remains unchanged: fulfill your mission here in this world, use G-d’s bounty to create a dwelling place for Him, spread His wisdom to your fellow Jews. We can all be millionaires. It’s up to us.