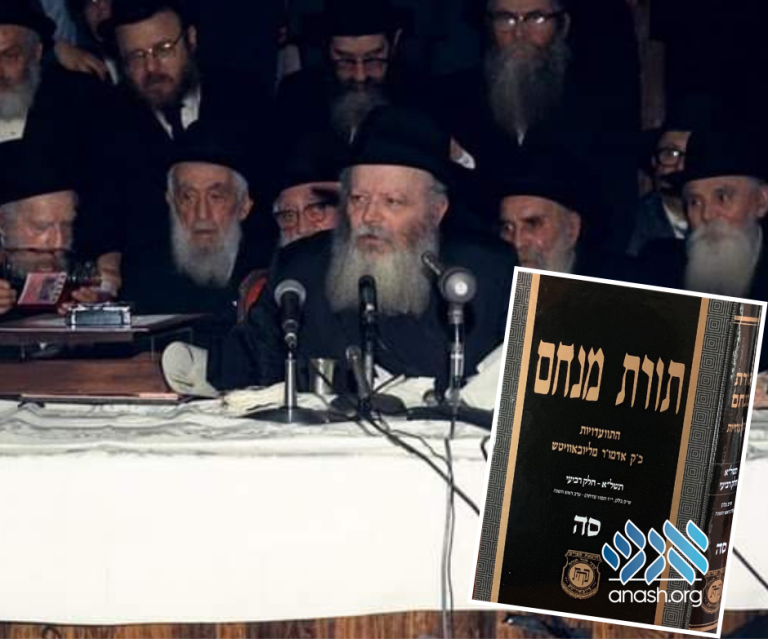 In honor of 28 Sivan, Lahak Hanochos has published the new Toras Menachem volume 65, featuring over 500 pages of Sichos and Maamarim from the end of 5731 (1971).

Lahak Hanochos has published Toras Menachem volume 65, featuring over 500 pages of Sichos and Maamarim from the end of 5731 (1971). It is the fourth volume of 5731, beginning with Shabbos, 17 Tammuz, and ending with the Rebbe’s Rosh Hashana message at the cusp of the new year. The end of the sefer contains detailed indexes cataloging all the contents of the Rebbe’s Torah over the previous year. A special addition to the sefer are four pages of the Rebbe’s edits to a Sicha for the radio broadcast of Rabbi Weinberg, with an entire sharp paragraph in the Rebbe’s handwriting about Mihu Yehudi.

One unique farbrengen chronicled in this volume took place on the Shabbos before Rosh Hashanah. Towards the end of the farbrengen, the Rebbe said a short Sicha for the new Russian immigrants who had arrived for Tishrei.  At its conclusion, he said he would translate it for those who didn’t understand Yiddish, and – to everyone’s surprise – proceeded to repeat the entire Sicha in Russian, adding a segment for the women as well.

Another special period covered in the sefer are the “Three Weeks” of Bein Hameitzarim. The Rebbe held farbrengens on both 17 Tammuz and Tisha B’av, which fell out on Shabbos (like this year). A common theme in the Sichos is that the darkness of those fast days is weakened considerably when they are pushed off from their regular date.

That year, the Rebbe also spoke often about Mivtza Torah, the campaign to conquer the world through Limud Hatorah. During the 17 Tammuz Farbrengen, the Rebbe said that it applied especially to the Merkos Shluchim Bochurim. They needed to be equipped with ready words of Torah – both Nigleh and Chassidus; sharing those Torah thoughts was a primary focus of their Shlichus.

Lahak Hanachos, under the directorship of Rabbi Chaim Shaul Brook, continues their search for the missing Sichos and Maamarim in order to bring them to print.

In this Sefer, one Farbrengen – Shabbos Ki Seitzei – was recovered through a previously unpublished hanacha written by Rabbi Aharon Goldstien of Chabad of Ann Arbor, Michigan.

As a bochur, Rabbi Goldstien would often take personal notes of the chazara conducted after each farbrengen (the Rebbe’s farbrengens weren’t published on a regular basis in those years). Before he moved on Shlichus in 5735-1975, he decided to present the Rebbe with a set of his personal hanachos, knowing how much the Rebbe appreciated interest in the farbrengens.

According to Rabbi Goldstein, the Rebbe’s pleasure was clearly evident when he presented them to the Rebbe.

“After asking me about various details, the Rebbe said, ‘A groyser yasher koach. Es iz a gute zach, mistame vet es breingen a toeles. Thank you very much. It’s a good thing, and it will certainly come to good use.’ As the Yechidus concluded, the Rebbe thanked me once again.”

Indeed, the hanachos – today in the Rebbe’s library – have come to good use. They have assisting the editors in Lahak Hanochos in preparing many farbrengens of those years, providing a priceless treasure for Chassidim learning the Rebbe’s sichos.

One interesting element of this farbrengen is the “divrei hesped” the Rebbe said about Rabbi Reuvan Margalios. Reb Reuvan was a brilliant Torah scholar who published over fifty works, including a “mesoras hashas” style work on the Zohar and a masterful commentary on Maseches Sanhedrin. The Rebbe had often made use of his books and had corresponded with him for many years. During this farbrengen, after Reb Reuvan passed away leaving no children, the Rebbe spoke a few words in his memory.

With the approach of Gimmel Tammuz, Lahak Hanochos is pleased to list all of the books of the Rebbe’s Torah that it has made available to date:

May we merit to hear new original Torah, “Torah Chadasha,” from the Rebbe, with the coming of Moshiach, speedily in our day.

To order the Sefer with Seforim Deals please click here.