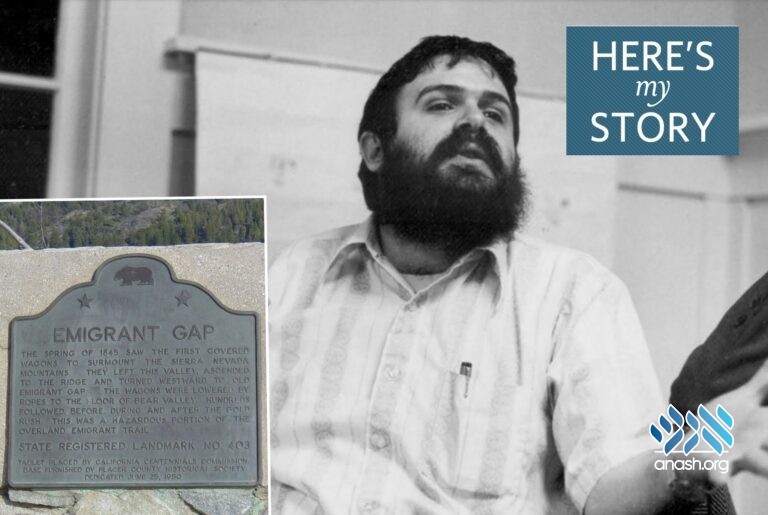 When Rabbi Chaim Itche Drizin received a call on a Friday from a Jewish father begging him to visit his daughter urgently, he felt a need to go despite the late hour. After Shabbos he discovered why.

Rabbi Chaim Itche Drizin has held several positions as a Chabad representative. Today, he is a marriage and family therapist. He was interviewed in February of 2021.

When I moved there to set up a Chabad House in 1972, Berkeley was a very tumultuous place.

I found myself doing a lot of work with young people who had left home and somehow lost contact with their parents. I would get two or three calls a week from mothers saying, “My daughter is in an ashram somewhere. Can you try to get in touch with her?”

I became so busy driving around to visit these people that I began taking my talit and tefillin along with me in my car, in case I got stuck someplace overnight. One Friday, as I was sitting in the Chabad House, I got a call from a Mr. Friedman.

Between sobs, Mr. Friedman told me that his daughter was on her way to Hawaii with a young man who was a born-again Christian. She had become attracted to him and to his new religion and they were staying together in a small town called Emigrant Gap, but just after Shabbat, they would be leaving for Hawaii.

“Please,” he says, “I beg you to go speak to her before she leaves.” Shabbat is a few hours away, but as he’s talking, I recall seeing a sign for Emigrant Gap on the I-80 interstate highway, past Sacramento. Not too far away, I think.

For some reason, I hear myself saying, “I’ll do my best.” I hang up and call my wife to say that I’m going to Emigrant Gap, near Sacramento. It’s about two hours away, so I’ll be able to make it back before Shabbat.

“Okay,” she reluctantly agrees. “But just remember that after Shabbat we’re having a special event in our house, so you need to make it back.

Remember, back then there were no cell phones, no beepers, and no GPS. I just got in the car and started driving. And then I kept on driving. When I passed Sacramento I thought, “It’s not going to be far now,” but it was. I stopped somewhere to ask for directions, and was told it’s another seventy-five miles.

At this point, I couldn’t stop. I don’t know what it was, but there was something that kept me from turning back. I found a phone booth and called my wife.

“It’s not looking good,” I reported. “I’m sorry, but I don’t think I’m going to make it back before Shabbat.”

Back on the road, after what seemed like an eternity, I finally saw a sign reading: Emigrant Gap, population thirteen. It was maybe half an hour before Shabbat.

Coming off the exit, there was a little gas station, grocery and post office — everything in one little shop — and I went in with my address. “Oh yeah,” said the storekeeper, “that’s about twenty minutes up the road.”

I bought some sardines and whatever kosher food I could get my hands on, and by the time I found the address, Shabbat was just about to begin. I took my things out of the car, and knocked on the door.

He was very welcoming, but when the young woman inside spotted me, she looked at me with daggers in her eyes and walked out without saying a word. It was Dina, and she knew that her father had sent me.

“I hope it’s okay if I stay here overnight,” I said, praying that my host won’t turn me down.

“No problem.” He spread a sleeping bag out on the floor in a side room, and we sat down to talk.

This young couple had plans to get married, but I could tell that this man was also new to whatever Christian group they had gotten into. And so I kept on telling him, “You know, your girlfriend Dina was born a Jew. She may not know that much, but you’re inviting her into a new religion. So before she goes to your religion, maybe she should find out about her own.”

He wasn’t opposed to the idea. “You may be right,” he conceded. “Maybe after we get married she can go somewhere to learn about Judaism for a couple months. Do you have any ideas?”

I told him about Bais Chana in Minnesota, which is a seminary run by Rabbi Manis Friedman for women who are returning to their Jewish roots. He was game.

Meanwhile, Dina wasn’t even willing to talk to me. So I spent many hours speaking to him that night, and in the morning, I prayed, had my sardines, and then we carried on talking. It wasn’t a very formal Shabbat, to say the least.

Clearly, Dina’s boyfriend was very excited about his newfound religion, and was interested in talking because he was trying to sell it to me. Between the lines, though, I kept on talking about Dina, and about what she needed to do. But it was all up to her, and she wasn’t having any of it. By the time Shabbat came to a close, I realized that I had failed.

I took my talit, went to my car, and got ready to go. My car was a little two-seater MG, and as I turned on the engine she suddenly appeared, holding a knapsack. She walked straight over to my car, opened the door, put her little bag behind the seat, and sat down. I didn’t know what had made her change her mind, but I knew better than to start asking questions. I just took off.

Maybe twenty minutes passed before she finally spoke up. “You have no idea why I’m coming with you, do you?” she asks.

And then Dina breaks down crying. “All my life,” she begins, “my father has been telling me that when I was a child, he took me to see the Lubavitcher Rebbe.”

Her mother had passed away, Dina explained, and her father was worried how she was going to grow up without a mother. In particular, he was worried about what would become of her Jewish identity.

They came from their home in Manhattan for an audience with the Rebbe and Mr. Friedman asked for a blessing to bring up his child as a Jew.

The Rebbe gave his blessing, and then added: “If you’re ever having any difficulties with your daughter’s Judaism, call on Chabad, and we will help you.”

“All my life I’ve been hearing that story from my father,” Dina says as she turns to me, “and now you come. Did he tell you about all this?” she asks.

“Well, that’s the way my dad is — he says very little. But I’m telling you, you are fulfilling a promise that the Rebbe made to my father.”

I took her back to Berkeley, we arranged a flight for her, and I took her to the airport. She went to Bais Chana, and eventually became observant. I hear she is living with a family in Jerusalem today.

When I called the Rebbe’s office to report that I had fulfilled the promise made to Mr. Friedman, the Rebbe responded simply: “Thank you, thank you for this good news.”