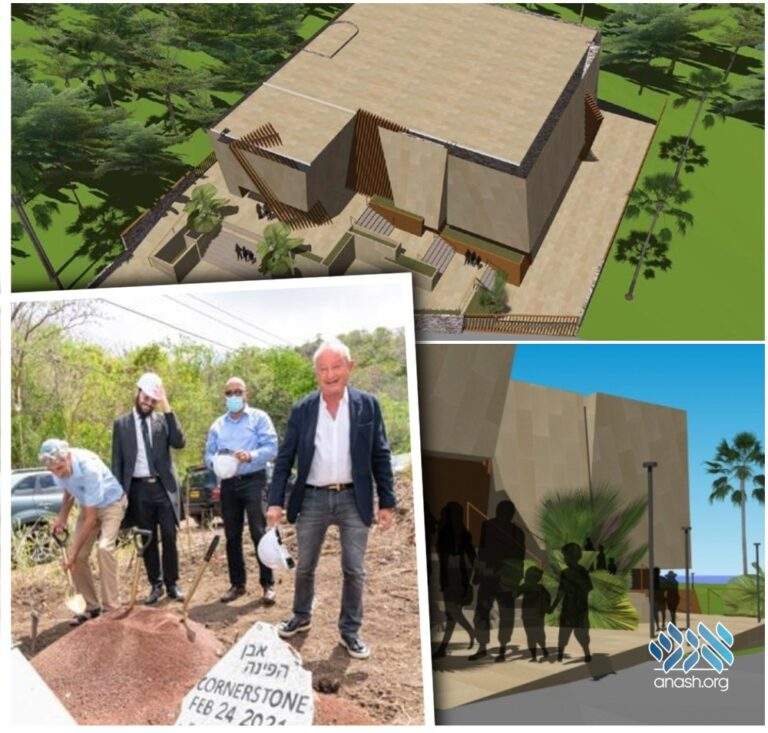 The island of Grenada, known for its beaches and stunning waterfalls, is home to a thriving medical school. Now, it also be the site of a new 15,000-square-foot Chabad center that will serve hundreds of Jewish medical students every year.

The Caribbean island of Grenada—known for its white sandy beaches, stunning waterfalls and an abundance of nutmeg, cinnamon, cloves and ginger—is also home to a thriving medical school. Now, the Spice Isle will also be the site of a new 15,000-square-foot Chabad center that will serve as a home away from home for the hundreds of Jewish medical students who study there each year.

“For the Jewish students, Chabad is really a lifeline,” said Mark Benner, a student at St. George’s University of Grenada, following the recent groundbreaking ceremony for the new center. Having grown up in a Torah-observant home, Benner says he was apprehensive about how he’d hold onto his Jewish values while attending a university in a popular tourist destination so far away. “Rabbi Boruch and Chaya Rozmarin make studying medicine here possible for me,” he told Chabad.org.

St. George’s University draws students and faculty from 140 countries to Grenada, and Chabad of Grenada provides programs that include Jewish-studies classes, Shabbat and holiday meals for students, faculty and tourists, as well as a lounge stocked with free kosher snacks. The social hub that they’ve created for Jewish students really makes for a nice little Jewish community, says Benner.

Like their peers attending the more than 80 medical schools that dot the Caribbean, the students at St. George’s tend to be those who, for a host of reasons, were unable to attend medical school in their home countries. Keenly aware of the challenges they face in being accepted to competitive residency programs at hospitals back home, they are often fanatically devoted to their studies, even by med-school standards.

Benner says he appreciates knowing the rabbi and rebbetzin are always only a phone call away. “They want to be there for us,” he says. He fondly recalls the warmth and personal attention that he felt during Chanukah when Chaya Rozmarin baked fresh sufganiyot (doughnuts) and the Rozmarins drove around the campus to various study halls, handing them out to the students. Last year, he says that he was particularly appreciative of the fact that Rabbi Rozmarin arranged for there to be a sukkah built right in the campus center. “Chabad is a great place both for observant students and for less observant students who are learning more about their Judaism.”

The Rozmarins moved to Grenada in 2013, and the rabbi says that building a center was “the dream from day one,” but only last year did actual plans start to materialize. After the coronavirus pandemic hit, classes were suspended, and the United States government urged all the American students to return home. That was when a donor came forward and offered to buy the land on which to build. Though it felt ironic to the rabbi that they were being offered this opportunity to expand during the quietest period in the years that they have been serving there, he also says he felt that the time was right.

Bringing Torah Literature and a Connection

Chabad’s involvement in the Caribbean dates back more than 60 years to 1957, when Rabbi Yehuda Krinsky, now the chairman of Merkos L’Inyonei Chinuch—the educational arm of the Chabad-Lubavitch movement—and the late Rabbi Leibel Raskin, who went on to serve as a shaliach in Morocco, were sent by the Rebbe to travel from island to island, bringing Torah literature and a connection to the outside Jewish community to Jewish people in Puerto Rico, Jamaica and the Dominican Republic.

A little more than 25 years later, after the Grenadian government was overthrown in 1983 as part of a military coup and Communist elements seized control, U.S. President Ronald Reagan initiated “Operation Urgent Fury,” where the U.S. Armed Forces entered Grenada in part to protect the lives of the American medical students at St. George’s.

The Rebbe instructed Col. Jacob Goldstein—an Army Reserve chaplain and Chassidic Jew, who had been deployed to Grenada to help the soldiers celebrate Chanukah—to find out how the Jewish residents of Grenada were faring. He was also encouraged to make an effort to lay tefillin on every Jewish soldier and, if possible, give customary Chanukah gelt (money gifts) to the soldiers.

Peace was soon restored to the island, and the “Roving Rabbis” program of young rabbinical students started visiting the Jewish students on a regular basis, especially for Jewish holidays. Bearing prayer books, kosher food and other supplies, they helped ensure that medical students were able to observe Judaism and celebrate holidays until the Rozmarins founded their center.

A Small Ceremony During the Pandemic

The recent groundbreaking, attended by community members and the philanthropist, was an intimate yet lovely event. Oleg Khomenko, a community member who moved from Israel to Grenada three years ago, became personally involved with the preliminary architectural stages for the new Chabad center. “It was a great event because it was something that they’ve been dreaming of for the seven years that they’ve been here in Grenada,” he says.

When Khomenko and his wife were contemplating moving to Grenada, he says that a sense of community was quite important to them. “I knew before I moved here there was a Chabad House. The Rozmarin home was the first door that we knocked on in Grenada. The second day after we arrived, my wife and I drove to Chabad, where we met with the rabbi and his wife, Chaya, and we were greeted with hugs and lots of warmth.”

Having worked in real estate development for a number of years and participated in the designing and building of Jewish centers in Israel, he says that he offered to do whatever he could to support and help to make it happen. Oleg took care of the design, hired an architect, and is in touch with various manufacturers who will join together to build the new Chabad center, which will house a synagogue, a mikvah and a kosher cafeteria for the students.

“In a country where we had lots of newness to adapt to, it made us feel much more comfortable to know someone in the community,” he says. “We are so happy to have them, and we respect the important work that they are doing here.”