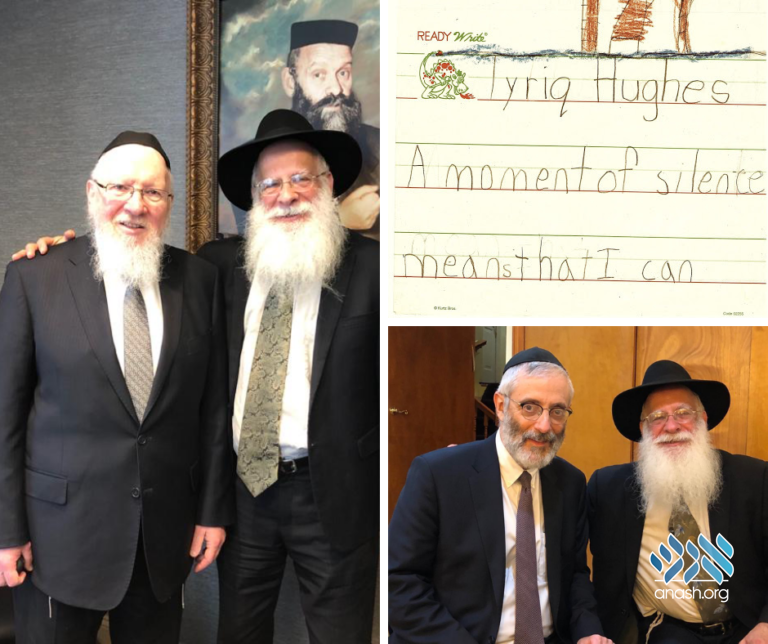 From Kenya, Africa to frum schools in Brooklyn, a Moment of Silence is gaining traction- in some very unexpected ways.

On May 2, 2019, Rabbi Yisroel Goldstein of Poway, California delivered a powerful speech in the Rose Garden, urging our nation’s leaders to recognize the need for holding a daily Moment of Silence in our public schools. Sitting in the audience was Rabbi Chaim Dov Zwiebel, executive vice president of Agudas Yisroel.

Shortly after, Rabbi Avi Shafran of Agudas Yisroel wrote an article on the topic for Fox News. Following these two occurences, Rabbi Zwiebel came to the office of Rabbi Avraham and Mrs. Shira Frank, renowned Moment of Silence activists, for a meeting.

Rabbi Frank showed Rabbi Zwiebel letters that had been written by public school students whose schools are participating in the campaign. During the ensuing conversation, Rabbi Zwiebel expressed an interest in seeing how this initiative might be beneficial for frum schools.

The Franks met with Torah Umesorah director Rabbi Dovid Nojowitz and shared Rabbi Zwiebel’s idea with him. They showed him the public school children’s letters, which left a strong impression.

Discussions are now taking place between Rabbanim and representatives connected to various schools. Together, they are exploring the possibility of having a Moment of Silence endorsed and widely implemented within the frum community.

In addition to this new development on the home front, Rabbi Frank has seen recent success in an unlikely locale.

“We have a contact in Kenya who has been telling school principals there about this idea,” Rabbi Frank told Anash.org. “When a principal expresses interest, I get in touch with them; we now have three schools in Kenya that have instituted a Moment of Silence!”

A week after the schools begin the daily ritual, Rabbi Frank follows up with them to see if they’re noticing a difference. One of the principals in Kenya made a surprising observation.

“Since instituting the Moment of Silence, I’ve noticed that our students are making less [academic] mistakes,” he said.

Another principal expressed the hope that this ritual would help her school community heal following the tragic death of a student. “As we go through the healing process, we shall intensify the Moment of Silence program,” principal Jacinta wrote in a heartfelt thank you message to Rabbi Frank. “We meet as a school 3-4 times a week; for us, these are the ideal times to meditate together.”

In Kenya, students are under a lot of pressure to perform well in school. As a result of this pressure, there is a lot of violence on the school campuses. The hope is that a Moment of Silence will help with this difficulty; so far, the principals are seeing positive results.

In Sparta, New Jersey, shliach Rabbi Mendel Dubov is teaming up with Mr. Lawrence Pearson, a stockbroker and MOS activist. Mr. Pearson approached the local school board about implementing a Moment of Silence; he is now working with Rabbi Dubov to rally people behind the cause.

They go around the city, educating people on the streets about the campaign, and the importance of instituting it in local schools. Two of their biggest supporters to date include a Presbyterian and a Catholic priest. Once they have enough people on board, they plan to meet with the city counsel to advocate passing a Moment of Silence act for their school district.

If you know of schools or individual teachers who have successfully implemented the Moment of Silence, the Franks would like to hear about it! Having a list of frum schools taking part in this initiative, and seeing its results can be very helpful in winning others over to the cause.

Please email Rabbi Frank at [email protected] with the names and contact info of those who are making a Moment of Silence part of their students’ day.