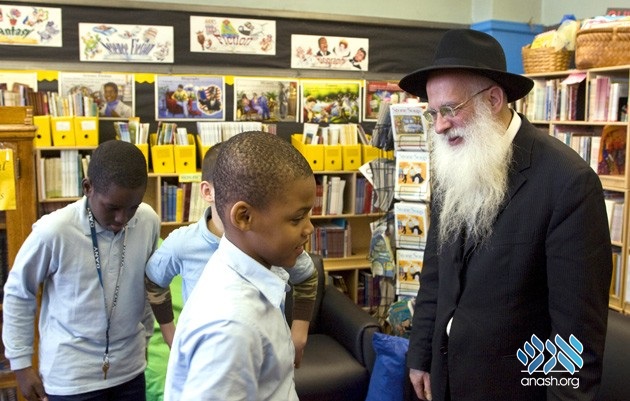 Rabbi Avrohom Frank of Flatbush took it upon himself to be a driving force behind the Rebbe’s campaign to introduce a moment of silence into schools all over America. Recently, Anash.org sat down with Rabbi Frank to discuss his work on this very important project.

Can you give us a brief history on the Rebbe´s campaign for a moment of silence in public schools?

It started around 5740/1980. A moment of silence had already been instituted in the State of Virginia prior to that, but the Rebbe wanted there to be a moment of non-denominational prayer. This did not come to fruition because there was fear that the Catholics would hold too much power and ultimately control the agenda of ¨non” denominational prayer.

What was the impetus for the campaign?

The Rebbe said that due to parents reneging on their duties to raise their children in a proper and moral way, the mantle fell to others in society. Ultimately, teachers and schools had a large role in the lives of the children and this would be a way to instill in them the idea that there is ¨an eye that sees, and an ear that hears¨.

From the letters of participants in the program, it is enlightening to see how many students allude to increased dialogue in their homes about being upright and moral citizens

How did the Rebbe envision the ¨moment of silence” in schools?

While the Rebbe maintained that the need to grow up to be upright and just members of society should be imparted to children [by their teachers],  the Rebbe also stressed that this should be a precursor to children receiving more input on their upbringing from their parents. The Rebbe was adamant that in newspaper articles there should be published directives on how parents could relay ethics and morals to their children.

How did the Rebbe intend to circumvent the need to have separation of church and state?

It should be noted that there is really no need to circumvent this as there are 34 states that have legislation for a moment of silence or school prayer.

Moreover, the Rebbe maintained that the entire idea of separation of religion and state was completely misunderstood. Most people think this means that G-d should be removed from schools, but the Rebbe said the purpose of the law was to prevent the government from mandating that schools teach a religion of the government’s choice. It was not intended to chase G-d of the schools.

What motivated you to get involved with this project?

I took this upon myself. The motivating factor was a JEM video entitled ¨A Moment to Save the World Part II¨; after I saw the video I was overwhelmed. There was just a spark in the video that drove me to get to the bottom of what it was all about. I watched the video numerous times. I had a job in the city and I decided to show the video to two non-Jewish colleagues. When I showed it to the first, she stood sobbing like a baby at my desk. I put it on for my second colleague and told him I would return in a few minutes. When came back, he was repeating the English subtitles from the video verbatim. The man looked like he was mesmerised and he asked me to play the video again and again.

Following these two encounters, I decided to investigate and see if there was anyone that was doing this on a mass scale. I found that there were only a few teachers doing it on a minor scale, and was surprised that no person that no one had taken on this directive of the Rebbe in a serious way.

While my involvement with the project came after Gimmel Tammuz, there is a moment in my mind that it was clear to me that the Rebbe knew that I would take on this role. I once wrote to the Rebbe that I had been giving over sichos in nearby shuls and they were warmly accepted. At Kos Shel Bracha, the Rebbe gave me a warm smile. My wife was situated in clear view of the Rebbe at that time and saw the broad smile as well. I assumed that it was for the news that I reported in the letter. I feel strongly now that the Rebbe was smiling to me because of the work that I undertook with this campaign.

How do you go about having the Rebbe´s directive implemented?

This was something that took me time to work out. The Rebbe wanted letters sent to Congress, and I was not sure how to go about that. After speaking with experienced shluchim, it came to light that the main thing is to have the program implemented; the letters and bureaucratic processes would follow.

My method is not a cut and paste solution, it depends on whom I am talking to. If there is a principal in a school that is sympathetic and in tune with the impetus behind the Rebbe´s directive, that is the way to go.

The Rebbe also wanted to arouse public interest in this matter. To achieve this, I have students write reports on the campaign once it has been implemented. I have taken envelopes filled with these positive reviews and sent them to every single member of the House of Representatives and the Senate.

The efforts to push for a moment of silence is very much a grassroots initiative. The website includes a step-by-step guide, instructing individual teachers and principals on how to implement this in their own schools.

Can you share some of the feedback you’ve received from those that implemented the program?

The feedback is always positive. Many principals point to academic improvement among their students after implementing the program. In the words of one principal, the increased success was linked to the fact that students were considering their own self improvement.

One student wrote in an essay about the moment of silence that he was able to carry it out at home too, and found it particularly helpful with conflict resolution.