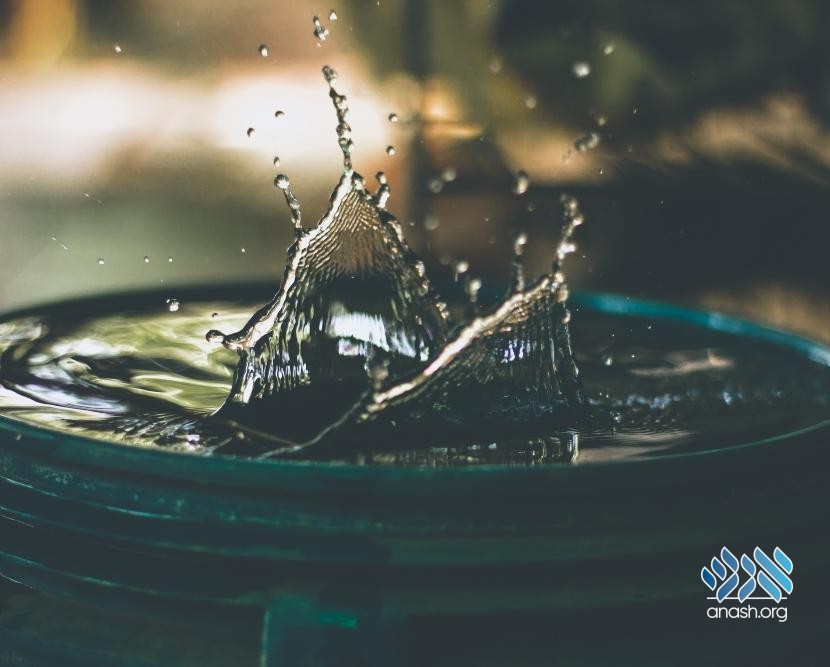 Motzei Shabbos Story: When an agunah came to Reb Yisroel Kozhnitzer, he was able to help her, by way of a vision in a barrel of water, a disappearing sleeve, and a lot of emunas chachomim.

Oh, hers was a bitter lot. Her husband had left her years ago. Now, their marriage had not been perfect. But still, he did not need to steal away like a common criminal without even telling her that he was leaving, or even granting her a divorce.

That was the worst part of it all. Without a divorce, she could not remarry. And so she was “chained” to the man who had betrayed her.

Yes, she tried looking for him, sending letters to rabbis in communities all over Poland. She even tried consulting the greatest Talmudic scholars, hoping for a “loophole” that would allow her to remarry. But nothing panned out. She had almost resigned herself to the fact that she would live alone for the rest of her life.

As a last resort, she and her brother—her faithful brother, who had supported her even when her friends abandoned her—traveled to the city of Kozhnitz. There lived the great rebbe, Rabbi Yisrael (1737–1814), who was known far and wide as a wonder-worker.

“Rebbe,” she sobbed, “you are my last hope! My husband left me years ago, and I desperately want to move on with my life. Tell me, O tell me. Where shall I turn?”

The rebbe listened intently, his large eyes mirroring the raw pain and agony of her words. Then, turning to his assistant, he asked that a pail of water be brought into his study.

“Look into the pail,” said the rebbe to the woman, “and tell me what you see.”

“Now look for the marketplace. Can you make it out?” prodded the rebbe.

“Yes, yes,” she replied, “I can see the marketplace. It’s lined with shops on either side.”

“Now look into the windows of the shops, and tell me what you see.”

“Rebbe! I see my husband,” she replied excitedly. “He’s aged a bit, but I would recognize him anywhere. He is sitting around a table with a group of workers, and they are all sewing. He’s putting the finishing touches on an ornate sleeve right now. I’ve seen him do this dozens of times. You know he was a tailor, my husband . . .”

“Good,” said the rebbe. “Now take your hand and grab the sleeve from him.”

As if in a trance, she took her hand and plunged it into the cold water, and withdrew it holding the sleeve—still warm from the iron!

“Good,” said the rebbe. “I want you to hold on to that sleeve. With G‑d’s help, you will get a divorce from your husband.”

“Rebbe,” said the brother and sister, “please instruct us. Where should we go next?”

“You can go wherever you’d like,” was the rebbe’s cryptic reply.

“But how can we possibly hire a coachman if we don’t even know where we wish to travel?” they asked. “Please guide us, Rebbe.”

“Go in peace,” said the holy man of Kozhnitz. “The good and merciful G‑d will prepare everything for you.”

They stumbled out of the rebbe’s humble home, and there stood a gentile coachman next to a coach that was harnessed to two fine steeds.

“Can you take us?” they asked the man.

“Yes, get in,” he replied without the usual discussion about destinations and fares.

Within minutes they found themselves in a vast and dark forest. They could scarcely see the path, but they had no fear. Clutching the sleeve, the woman had faith in G‑d and His messengers.

Suddenly, the two of them found themselves tumbling on the hard ground. “We must have fallen asleep,” they said to one another, “and the coachman must have dumped us out of his coach and ridden off.”

They stumbled through the forest until they came to the edge of a large city. “This is the city I saw in the bucket,” the woman said hopefully to her brother. “Thank G‑d, the rebbe’s words are proving to be true. Let’s walk through the city until we find the marketplace I saw.”

Sure enough, they soon saw the marketplace. “My dear brother,” she said, “let’s quickly go to the rabbi of this town and ask him how we should best approach this matter. After all, my husband can easily deny having ever been married to me, despite the miracles that have brought us here.”

They made their way to the rabbi’s home and told him the chain of events that brought them to his city, even showing him the sleeve that they had brought with them.

“Thank G‑d,” said the rabbi, “who has not abandoned our generation, and has placed His holy spirit upon the great sage of Kozhnitz.

“I know your husband well. He has established himself in our city. He has a wife and children here, and is regarded as an upstanding member of the community. But fear not. Everything will turn out okay; just hold on to that sleeve.”

The rabbi then told the brother and sister to make themselves comfortable in the small alcove next to his study, and immediately summoned the tailor.

“Rabbi,” said the tailor quizzically, “is there something you need done? Does your clothing need repair?”

“I just have some questions for you,” answered the rabbi. “Do you have a wife?”

“A wife? Of course I do. Everyone knows that I am married and have a family.”

“No, were you once married before you came here and started your family?”

“Rabbi,” said he with a twinge of nervousness, “I was never married before. I came here free as a bird.”

“Tell me,” said the rabbi, “what were you sewing today?”

“Funny you should ask,” he replied, relieved that the conversation had shifted to a less touchy subject. “It was the strangest thing. I was sitting at the table working with my fellow craftsmen. I was holding the sleeve of a cloak I was making for a nobleman.

“All of a sudden,” said the tailor, “the sleeve flew right out of my hands. We all watched in shock as it flew out of the room, as if it were a kite in the hands of a child. We looked everywhere for that sleeve—I had invested hours of work into it—but it was gone. It was like a miracle had happened.”

“And what would you give me if I were to give you back your sleeve?” asked the rabbi.

“There is nothing I could give you,” said the tailor, “because there is no way you could possibly give me back that sleeve. It’s gone forever.”

“Oh, I can do it,” said the rabbi, sliding open the door of the alcove.

“Come in,” the rabbi bade the woman, “and give your husband what is rightfully his.”

The long-suffering woman placed the sleeve on the table, as the tailor gazed at the sleeve in amazement. He was so astonished by its miraculous return that he didn’t even notice who had carried it in.

“This is indeed your sleeve,” said the rabbi sternly, “but this is your wife!”

The man looked up and fainted.

After he was revived, the husband humbly gave his wife a divorce.

This story was recorded in Sippurim Nora’im by Rabbi Yaakov Kaidaner, who heard the tale from Rabbi David, a follower of the Kozhnitzer Maggid, who personally interviewed a number of people involved in this miraculous event.