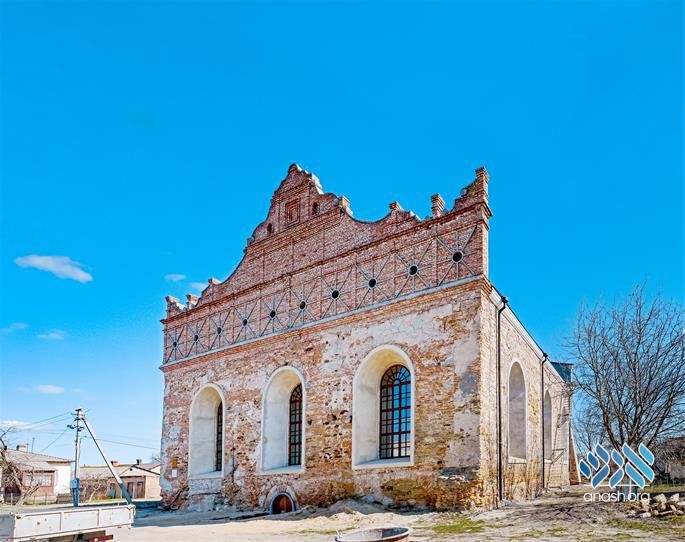 The shul of the Maharsha, as it can be seen today, in Ostroh. Photo: Wiki

Motzei Shabbos Story: During the years the Maharsha was rov of Ostroh, a deadly plague broke out. Locals began suspecting that it was a punishment on the account of one of the townsfolk, and decided to follow him into the forest…

During the years when Rabbi Shmuel Eliezer Eidels (1555–1631, known as the Maharsha) was the rabbi of Ostroh, a deadly plague broke out. The rabbi and the venerable members of the beit din instructed that a day be dedicated to prayer, fasting, introspection and repentance. The rabbi also announced that if anyone knew of issues in the community that needed to be rectified, they should discreetly notify him.

One of the townsfolk lived on the fringes of society and was never seen at the communal prayers. Up to this point, not much attention was paid to this fact, but after the rabbi’s request to share any information that could remedy the situation, two townspeople decided to investigate the man and track his whereabouts.

After a few days, they noticed that every night he left his house at midnight and headed to the forest outside the city. They followed him discreetly until he left the town behind, but when he disappeared into the thick forest, they lost him. Minds racing, the duo imagined that he must be up to some nefarious activities, perhaps even part of a band of thieves.

The next day they shared their findings with the rabbi, as well as their suspicions. Much to their surprise, the rabbi said, “Tonight I will join you, and we will follow him together.”

The scene repeated itself. At midnight the man left his house and began walking quietly towards the forest. Urged on by the rabbi, the small group followed him until he came to a clearing. There he stopped, sat down on a rock, and lit a candle. He then took out a small prayer book and began reciting Tikkun Chatzot, the traditional dirges lamenting the destruction of the Holy Temple, with great fervor.

The three men stood open-mouthed, listening to his prayer. Suddenly he broke out in tears that melted their hearts. But there was something else that struck them; they seemed to hear a second voice reciting the prayer with him.

“This fellow is certainly not a highway robber,” murmured the rabbi. “But who is the second voice that we are hearing?”

When he exited the forest, the three men approached the man. Apologizing for the surprise encounter, the rabbi explained: “Your conduct piqued the curiosity of some members of the community, so we had to track you. Now we ascertained that our fears were unfounded. But please explain who the second voice that we heard with you was?”

The man was perplexed by the question, but out of respect for the rabbi, he answered: “It has been my custom for some time now to mourn the destruction of the Holy Temple, and it seems that my prayers caused great satisfaction on high. Jeremiah, the prophet who foresaw and experienced the destruction, joins me on a nightly basis.”

The three of them looked at him in amazement. The rabbi broke the silence and asked: “If you have such a merit, why don’t you inquire in heaven as to the reason for the plague in our city? Additionally, why is it that you never join the community in prayer?”

“Tomorrow, I will come to the morning prayer and answer both questions together,” the man replied and headed home.

The next morning in the main synagogue, the rabbi watched the door, awaiting the arrival of the hidden saint whom he met the previous night. The prayers began on time, but the man did not show. About halfway through, the man entered while wrapped in his tallit and tefillin.

Suddenly there was a commotion in the crowd, and an incomprehensible fear fell on those present. Worshippers who tried to look at him were filled with anxiety and had to take their eyes off him, and some of them even went outside the synagogue to calm down. All the while, the man stood in the corner and prayed devoutly, clearly oblivious to the commotion he was causing.

When the prayers concluded, the man removed and folded his tallit and tefillin. The rabbi approached him and said: “Now I have a third question, what caused the fear when you entered?”

The man explained: “The Torah states: ‘Then all the peoples of the earth will see that the name of the L‑rd is called upon you, and they will fear you’ (Deuteronomy 28:10). And our sages note: This refers to the tefillin that are on the head. Thus tefillin causes fear, and that is why fear gripped those who saw me wearing my tefillin.”

“But I also wear tefillin daily,” countered the rabbi. “Why is no one awestruck by me?”

“It is because I am careful not to speak anything mundane while the tefillin are on me. I respect the tefillin properly; therefore, their sanctity is preserved. You all fulfill your obligation to wear tefillin, but because you are frivolous, the sanctity of the tefillin is compromised.”

The rabbi listened, as did the others. Then the man added: “This is why I do not come to the synagogue, because the masses are not meticulous in respecting the synagogue’s sanctity. I do not want to be tempted to speak while in the synagogue, especially when I wear tefillin.”

After a moment of silence, the man continued. “In my opinion, if this problem will be remedied, the epidemic will stop.”

The story quickly spread and all residents agreed to strengthen their commitment to upholding the sanctity of the synagogue and tefillin, and in a few days, the plague stopped.

The residents of Ostroh continued to keep their commitment even after the plague ended and life returned to normal. The synagogue became known as the Maharsha’s shul, after the rabbi, and it was treated with the utmost sanctity.