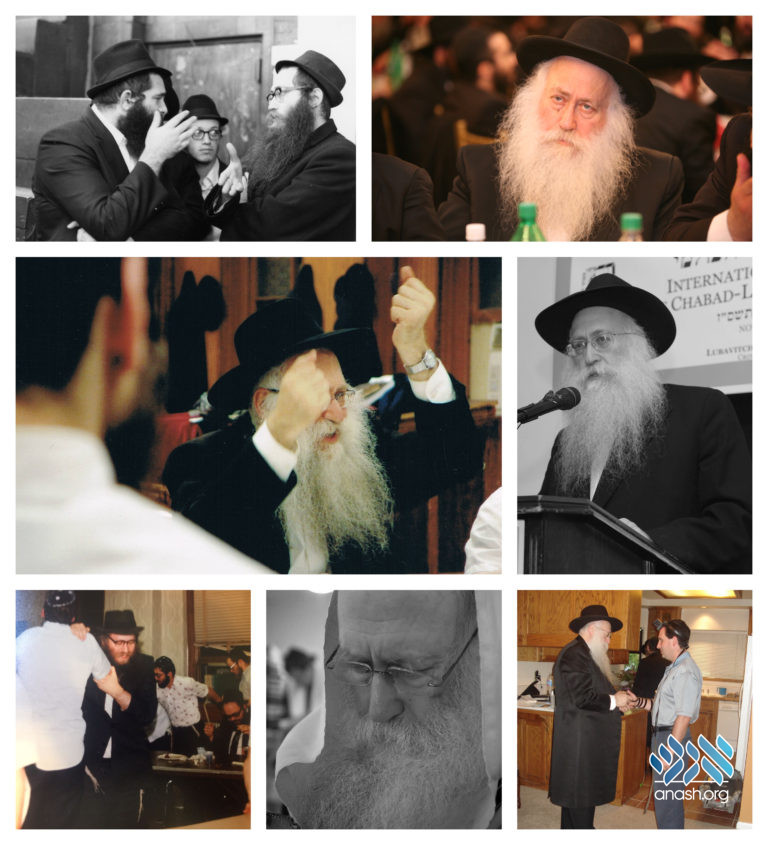 Maskil in Chassidus, gaon in nigleh, oived Hashem, mekushar, mashpia, communicator of chassidic tradition and stories, caring and understanding, humble and orderly. These are some of the portrayals given by students to describe the mashpia R. Meilech Zweibel.

Most individuals excel in one area and are deficient in others. R. Meilech’s well-roundedness – nigleh and Chassidus, personal avoda and care for others, profound and levelheaded – was truly exceptional. And he didn’t just dabble in those fields; he excelled in each area.

R. Meilech was what is known in chassidic terminology as a “pnimi” (lit. an inward person). This refers to a person who is guided by his inner convictions, and not swayed by popular opinion and the latest trends in chassidishkeit.

R. Meilech had no airs to him and was approachable to all. He could patiently listen to a young student’s elementary question in a maamar or to a recent baal teshuva’s personal dilemma. He didn’t try to impress or please his listeners, and he didn’t look to make his opinion known – speaking up only when he deemed it necessary.

His style of farbrengens were remarkable. He would expound on the inner themes of Chassidus and skillfully weave them along with stories and chassidishe vertlach to deepen his point and enlighten his listeners.

R. Meilech was born on 17 Menachem Av 5701 (1941) in Tel Aviv. His father, R. Tzvi Yaakov, a Tzanz chossid, wanted his son to attend a chassidishe yeshiva, but there were none in his area. A neighbor, Reb Yehuda Shmotkin, a senior Chabad chossid, suggested the Tomchei Temimim yeshiva in Lod which also had younger grades and a dormitory. At eleven years of age, young Meilech joined the yeshiva.

As he grew older, he became a close pupil of the mashpia R. Shlomo Chaim Kesselman. Under the tutelage of R. Shlomo Chaim that he developed an appreciation and dedication to Chassidus, and throughout his lifetime, he would repeat sayings he heard from the mashpia of his youth. At the Rebbe’s instructions to develop the bochurim’s appreciation for the intellectual depth of Chassidus, he went with several other bochurim to hear explanations in Chassidus from the great chassidic intellectuals R. Moshe Gurary and R. Nochum Goldshmit. As a member of Igud Talmidei HaYeshivos in Lod, he would travel from time to time to deliver shiurim in Chassidus in other Yeshivos.

In Tishrei 5722 (1961), a group of bochurim from Eretz Yisroel including R. Meilech were was given the opportunity to visit the Rebbe and learn in 770 for half a year. R. Meilech treasured that period, and remembered all the sichos and maamorim that he heard during that time. He would say that while he had previously learned the meaning of being a chossid, the Rebbe introduced him to the concept of just fulfilling Hashem’s will, not to become anything.

In the yeshiva at 770, the mashpia R. Shmuel Levitin would sometimes enter the zal during seder nigleh, sit down by his table, and talk to the bochurim about Chassidus and chassidic personalities. The mashgiach R. Mordechai Mentlik was not very happy about the interruption of learning, but out of respect for R. Shmuel he would not say anything. Though R. Meilech was exceptionally diligent and did not like to stop his learning, he took advantage of this opportunity to receive from an eltere chossid.

Once, R. Shmuel asked the bochurim if they knew where the expression “gevald” is used in Chassidus, aside from at the end of Tanya. R. Meilech replied immediately that it could be found in the maamar Ulekachtem 5661. R. Shmuel was amazed at his proficiency and he later mentioned it to the Rebbe. When the Rebbe inquired about the bochur’s name, R. Shmuel could only recall that the bochur had dark glasses… and the Rebbe smiled.

R. Meilech sought opportunities to befriend and learn from R. Yoel Kahn, several years his senior, who then taught the younger students who studied in “Bedford and Dean,” and on Ocean Parkway. This developed into a lifelong friendship of mutual respect.

In 5725 (1965), a shidduch was suggested for him with his wife, Libby Blesofsky. The Rebbe encouraged the shidduch, and wrote to her that “[he is] a young man of whom the Torah speaks praise – a chossid, talmid chacham, baal midos, and so on.”

Soon after his chassuna, R. Meilech was appointed mashpia in the yeshiva in Newark, NJ, which later relocated to Morristown. The Rosh Yeshivah at that time was R. Yisroel Friedman, and the two could be seen spending hours together, discussing and debating Torah and darkei hachassidus.

R. Meilech stood out for his diligence and orderliness. He made sure to utilize every moment, and always had a Torah pamphlet in his pocket to peruse in any spare time. His extraordinary diligence is brought out in the following story: Several months before his passing he was taken to the hospital, and when he arrived, he immediately requested a sefer. When a sefer was not able to be found, he asked to listen to a shiur on the telephone, but there was no reception. He was very pained until they found a maamar in one of his pockets, and he immediately delved into the maamar.

His diligence was one expression of his exceptional kabalas ol and self-discipline. He would arrive to the yeshiva’s seder exactly on time, and made sure to finish his shiur right at the conclusion of the seder, emphasizing the importance of orderliness. He stressed the need to go to sleep on time, and would quote Rabbi Boruch Shimon Schneerson, his Rosh Yeshivah in Lod, who remarked: “Some of my colleagues in Yeshivas Chachmei Lublin studied day and night. I made sure to sleep eight hours a night and I was more successful than them.” R. Meilech would say, “A true masmid is one who sleeps, learns and davens at the proper times, and not one whose lifestyle is ‘wild’ without order.”

R. Meilech would not push off something he had to do, but he took care of it right away. A student shared how R. Meilech advised him in yeshiva not to delay even his schedule of washing laundry. R. Meilech reasoned that in this way he remains in control of his life and doesn’t do things only when he is forced to do them.

Though R. Meilech was personally removed from worldly matters and pleasures, he possessed a keen understanding of practical matters and many benefited from his advice.

Along with his appreciation of the deepest elements of Chassidus, he would emphasize the importance of practical observance. At one farbrengen, he spoke for hours about lofty concepts, but concluded by inspiring the bochurim to be more particular to review the sedrah shnayim mikra v’echad targum. Indeed, he would often quote a saying that the difference between Lubavitch and Kapust is that in Lubavitch they review the sedrah. This meant that in Kapust they were involved in lofty matters, and did not necessarily pay proper attention to small things like reviewing the sedrah, whereas in Lubavitch the involvement in Chassidus did not come on the expense of kabalas ol.

Another one of his outstanding features was his humility. He never imposed his opinion, and generally avoided expressing strong opinions. Even in learning he would usually say, “I seem to remember that it says this in such a place…” Due to his unassuming nature, he avoided farbrenging outside of his hometown, saying that there are plenty of chassidim who could farbreng.

His approach was to focus on the positive, and not to put down or embarrass anyone. He would not mark tests. Instead, he would call individual bochurim into his office and review the test with them. If the bochur had difficulty answering the questions, R. Meilech would “explain” what the bochur wrote, so that he understood the correct answer without feeling uncomfortable.

Though R. Meilech gave off the impression of being naïve, this was far from the truth. Rather, he overlooked students’ flaws since pointing them out would most likely not have the desired effect. Instead, he devoted his full attention to each student in turn, making sure that they left him with a good feeling.

In Torah knowledge, R. Meilech possessed mastery in both nigleh and Chassidus. His style of learning was unique, focusing on a thorough understanding of the material, illuminated by other sources, without elaborate pilpulim. He always thirsted knowledge of new areas in Torah, and notwithstanding his sharp selectiveness, he read and listened to whoever could offer a worthy Torah insight.

His kabalas ol, coupled with his thirst for Torah, brought him to study various maamarim and Nigleh seforim hundreds of times, every time with the enthusiasm as if he is learning something new.

For example, throughout many years of his position as mashpia, he taught the maamarim of the Rebbe Rashab from the years 5665-5666. Each maamar would span approximately three weeks, and during that time he was observed to learn through the maamar tens of times, though he had already taught that maamar for so many years. He studied hemshech samech vov hundreds of times, and possessed outstanding proficiency of its content, saying that this hemshech contains the fundamentals of the Chassidic outlook on life.

R. Meilech was involved in the editing and review of various scholarly Torah publications, including Likutei Sichos. The Rebbe had expressed dissatisfaction with the caliber of the written up sichos submitted for his review, and stipulated that they be reviewed by a reliable individual first. At first, R. Meilech was only responsible for the sichos about Chassidus, and eventually he became responsible for both areas.

In addition to his other duties in the Morristown yeshiva, he was the spirit behind the journal Ha’aros Hatemimim V’Anash that appeared weekly for the course of many years. Besides heading the editorial board, he authored many of the essays himself (under various pseudonyms). R. Meilech also served on the editorial board of popular Chassidus Mevueres series of maamorim and Tanya, and he would clarify difficult passages in his straightforward manner.

R. Meilech would encourage the bochurim to be dedicated to Torah study not only with kabalas ol, but also with vitality and enthusiasm. He would repeat the saying of the Rebbe Rashab that while one must toil in Nigleh (“b’Toraso yeh’geh”), one’s primary desire (“cheftzo”) should lie in “Toras Hashem,” referring to Chassidus. At the same time, he would often say that proper study of Chassidus and davening should motivate a person to be involved in service of Hashem during the rest of the day – in the case of a bochur, by studying Nigleh in depth.

R. Meilech would often refer to the difference in style between the farbrengens of R. Michel Der Alter and R. Shmuel Gronem Esterman. It can be said that R. Meilech’s own farbrengens were more similar to the latter’s style, who instead of demanding outright specific things from them, would inspire through stories of Chassidim and describing the wondrousness of Chassidus.