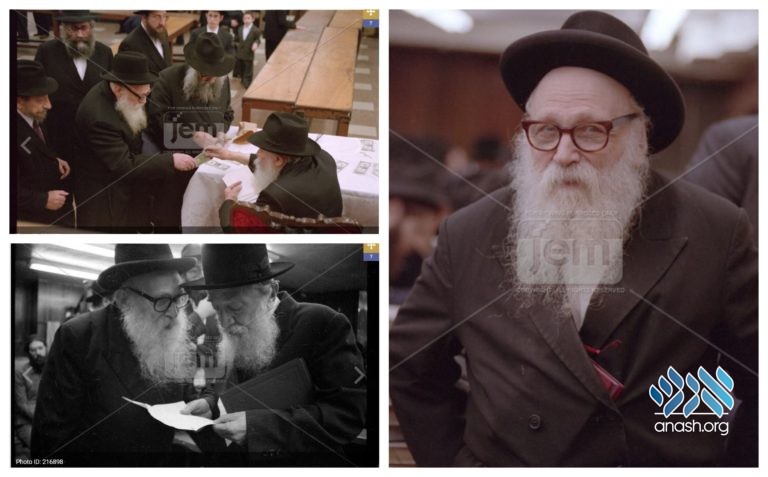 My father, Reb Meir, was born in Ukraine and became a talmid of Tomchei Tmimim on Lag B’omer 5686 (1926) when he was seventeen years old. That Tishrei and the following Tishrei were the two times that he saw the Frierdiker Rebbe.  A few years later, Reb Yonah Poltaver – Kahn, who was appointed by the Frierdiker Rebbe to become one the chassidim and take over his responsibility of running the underground Yeshiva, asked my father to help out in this work.

Initially, my father was the mashgiach of nigleh in Kremenchug. However, with time, he was given more and more responsibilities. He became responsible to raise money in order to pay the melamdim, and quite often he did so by dealing with the black market. How he convinced managers of factories to give him excess merchandise or material to sell, is a story of its own.

There were no secrets in Russia and the notorious KGB arrested him three times and exiled him for periods of time. When they saw that he wasn’t reforming, the instructions were that the next time that they get their hands on him, it will be the last time. However, with Hashem’s kindness, he managed to escape numerous times in the nick of time.

After the war, he left the Moscow area and moved to Tashkent. There the shidduch to our mother Cheyena Karasik, a niece of Reb Yonah Poltaver, was mentioned and they were married Chanukah of 5706 (1945). By that time both her parents had passed away. Her Mother, Aidela, passed away in 5702 (1942), and her father Reb Yehuda Leib, who was appointed by the Frierdiker Rebbe to become the Rov and Mashpia in Nevel passed away in 5703 (1943).

After escaping Russia with Polish passports on one of the last trains in 5707 (1947) before Russia sealed the borders, they were in DP camps for over a year, until they were official refugees who were housed in one of the apartment buildings in France under the auspices of The Hebrew Immigrant Aid Society – “HIAS.”

In France, he became a meshulach for Tomchei Tmimim, and did so until the beginning of 5714 ( Dec. 1953), when they moved to the USA with their six children. HIAS gave them a choice of settling in Philadelphia or Detroit. My father figured that if he was able to outsmart the KGB who was actively searching for him, it shouldn’t be a problem to stay in New York close to the Rebbe. However, the Rebbe told him that this is b’hashgocho protis to settle in one of those cities, and he advised my parents to settle in Detroit where the chinuch [in those days] was the better of the two.

In Detroit, he stood out as an example of what a chassidisher Yid is and what a chossid stands for. Although his salary as a mashgiach in a meatpacking factory was not big, our upsherinish was a big party. Our parents took pride in a minhag of chassidim and showed the community how chassidim conduct themselves.

On Thursday nights he would learn with others Likkutei Torah etc., and numerous families returned to or became Lubavitchers because of them. By our bar mitzvahs he made sure that the openings in the mechitzah were covered and it was a proper mechitzah.

On Shabbos afternoons he would rotate between the numerous shuls to review a sicha of the Rebbe or a ma’amar Chassidus. Although many people didn’t understand these chassidic insights, they respected him and slowly picked up some of the thoughts. On Yud Tes Kislev he would make an annual Siyum Hashas and turn it also into a farbrengen about darkei hachasidus.

Once (in the late yuds or ealy chofs-late fifty’s or early sixties) it was brought to the Rebbe’s attention that my father would end his talk saying that the Rebbe is Moshiach. The Rebbe replied, “Ehr zught dus mit an emes” – He is saying it because he truly believes so. That personifies my father; whatever he did was because it was real to him.

Avodas HaTefillah was real and he would daven at great length. Limud Hatorah was real and whenever a bochur would visit the house, he would begin discussing a thought in the gemorah. When the Rebbe was speaking, it was shechina midaberes mitoich geroino shel Moshe, so although he was in his eighties and was frail, he never sat down by a farbrengen while the Rebbe was talking because he’s giving over Dvar Hashem.

A halacha or minhag yisroel was real. He was terrified of missing z’man krias shema. This was so powerful that when he was already in his nineties, he would wake up throughout the night asking if it is z’man krias shema. Only after saying Krias Shema by sunrise or shortly afterward, did he fall into a comfortable sleep for a few more hours. If someone missed the trop during Krias hatorah, he would shudder wondering how that can be – that was his life.

As long as my parents lived in Detroit, the telegrams that the Rebbe would send out to the chassidic communities living outside New York,  as well as the shmura matza, would be sent to him.

After my mother became ill and the doctors in Detroit said they could not help her, they moved to New York for treatments. My father remained here after she was niftar on Chof-zayin Sivan 5746 (1986), and was recognized as one of the elder mashpiim in the community.

His love for the Rebbe was legendary. After Chod Zayin Adar, he constantly related how chassidim gave of their own years to the Frierdiker Rebbe when was he was in danger, and we should do the same. He bemoaned each day that we weren’t zoche to see or hear the Rebbe, noting it is one thousand ….days since we were zoche to see the Rebbe.

May we proudly continue in his ways.