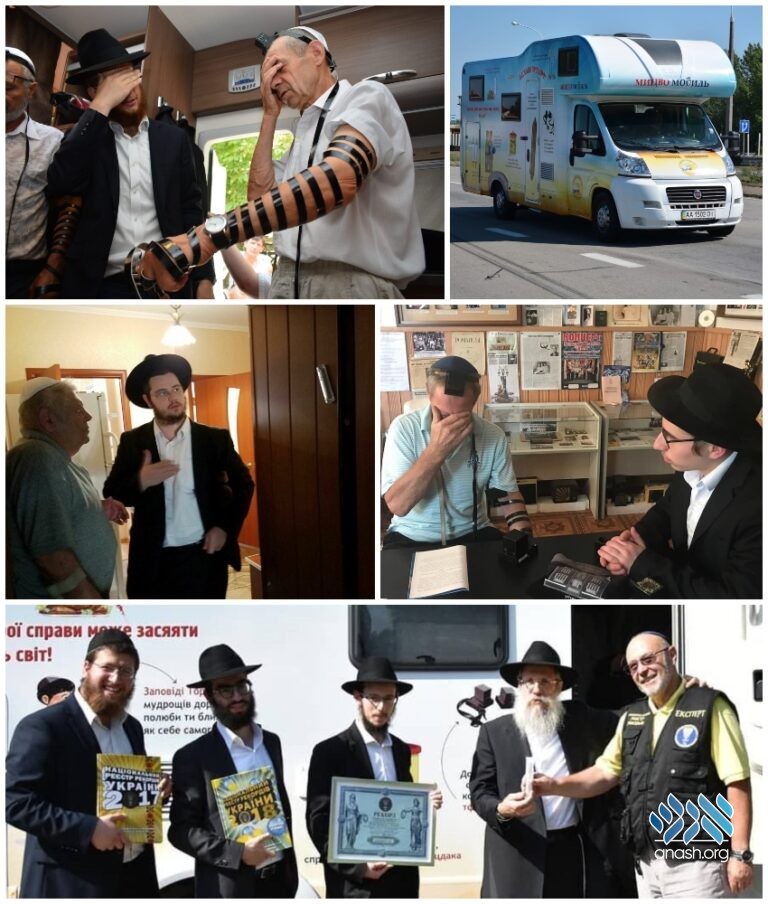 “Shalom! What are you doing here? I thought I’m the only Jew in town!” calls out an elderly man to a group of young rabbinical students on the street of Chornomorsk, Ukraine.

By Federation of the Jewish Communities of the CIS

“Shalom! What are you doing here? I thought I’m the only Jew in town!” calls out an elderly man to a group of young rabbinical students on the street of Chornomorsk, southwestern Ukrainian city. The rabbis come closer and engage in witty banter, making the atmosphere upbeat. “He didn’t even know there were other Jews in Chornomorsk!” exclaims Rabbi Mendel Wolf afterward.

Along with three yeshiva friends, Rabbi Wolf has been traveling all over Ukraine in a colorful Mizvah Mobile since 2017, but that hasn’t quenched his enthusiasm and he speaks passionately about their adventures.

“How did it all start? One day I was chatting with my friends about how we grew up in flourishing Jewish communities in the central Ukrainian cities, while many provincial towns do not have an active Jewish life,” recalls the 24-year-old rabbi.

After many hours of talking, the four yeshiva students decided to employ Rebbe’s 1974 idea of the “tanks against assimilation”, or Synagogue on wheels, to travel to the remote areas of the country and to connect with the local Jews. “We realized that if we didn’t take it in our hands, the rabbis would not come to these small cities and would not bring the light, warmth and comfort to the Jewish people there.” That summer, they rented a Mobile Synagogue RV and embarked on their first journey throughout 21 settlements in the south of Ukraine.

In September 2019 Mitzvah Mobile set a new record in Ukraine for the number of settlements one ethnographic expedition bypassed — 96 locations. “We were in Zhytomyr when people from the National Register of Records of Ukraine came to us,” notes Rabbi Wolf, “at that time there were only four of us. Now 12 young rabbis participate in the project. This year, thank G-d, we plan to visit over 100 settlements in 45 days.”

On the onset of the coronavirus pandemic, the Mobile Synagogue had to change its routine dramatically. Last year, only one group of rabbis traveled to a few locations, distributing masks, hand sanitizers, and jars of vitamins. Most of the meetings were held in safe outdoor settings.

“Because of the pandemic, we managed to convince the local authorities to organize public Chanukkah menorah lighting ceremonies in Bakhmut, Berdyansk, Slavyansk and other cities,” states Rabbi Wolf. For the first time in history, central Chanukkiahs were lit at the main city squares instead of people’s houses. “It was gorgeous. For all the Jews, who have been locked up for almost a year, it was an amazing opportunity to come out for this meaningful event, get some fresh air and to socialize with the rabbis.”

Besides delivering humanitarian aid, these young rabbis have also been playing an important role in providing spiritual support to those dealing with the losses from the pandemic and helping them to find ways of moving forward.

“You need to understand one simple thing,” says Rabbi Wolf confidently, “A person who did not know, or knew vaguely, that he is a Jew, has now learned from the rabbi that he’s Jewish, that the Jewish people is a living organism, they remember that he is alive and exists in some remote village. This completely changes his view of the concept “I am a Jew”. He becomes proud of the fact that he is a Jew, he becomes pleased with the very news that he is a Jew. Yes, maybe there won’t be instant changes, maybe he will not move to a city with a Jewish community, but at least in his mind Judaism will be something close to him, not something distant.”

Once, when the expedition was in Oleshki, Kherson region, they went to one of the Jewish residents. He was interviewed by the local media and asked what was his name: “My name is Matvey, but please write Mordechai, this is my Hebrew name.” He wanted all his friends to see him on TV tomorrow, where he would stand in a kippah, next to a rabbi, with a mezuzah on his doorway and he was captioned as Mordechai, not Matvey. “This person realized that being a Jew is prestigious, it is something that he can brag about tomorrow at work or on the market. And this is one of the most important reasons why we travel. This is the first step of a Jew towards Judaism.”

Photos provided by the Mitzvah Mobile expedition in Ukraine.