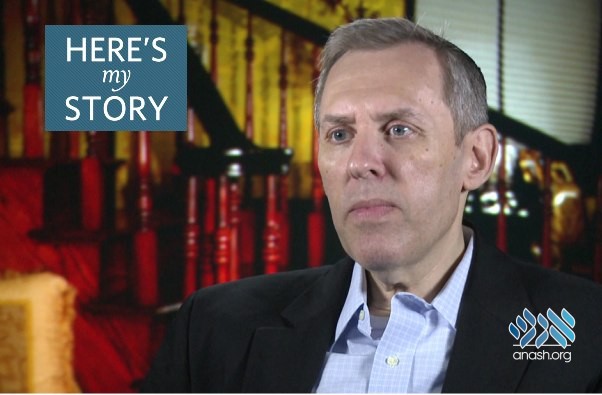 After spending a month at his ill father’s bedside, Dr. Stuart Ditchek had merited a yechidus with the Rebbe. The Rebbe brought to light a common connection the two of them shared, and gave him an open invitation to visit.

Dr. Stuart Ditchek is a pediatrician practicing in Brooklyn, New York. He was interviewed in July of 2013. Click here to download a PDF version of Here’s My Story.

In November of 1986, my father was being treated at Brooklyn Jewish Hospital, where the chaplain was Rabbi Elya Gross, a Chabad chasid. I was staying at the hospital to help care for my father, who was in a coma following a sudden cardiac arrest, and we became close friends. I greatly appreciated that Rabbi Elya came every day to make sure we had kosher food, and also to make us feel as comfortable as was possible under the circumstances.

We saw each other a great deal, as I spent a full month sleeping in the hospital by my father’s side. Having recently graduated from medical school, I felt I had the responsibility to make sure everything possible was being done to help him live. As well, I wanted to provide support for my mother who was devastated by what had happened.

One day, Rabbi Elya said to me, “You know, you are a great example to others of how to perform the mitzvah of ‘honor your father and your mother.’” And then he added, “As soon as you can leave here, I want to take you to see the Rebbe.”

This is what happened. After my father awoke from his coma and was discharged from the hospital in early December, Rabbi Elya took me to Chabad Headquarters at 770 Eastern Parkway.

When we arrived, I saw a lot of people hovering around the Rebbe’s office, but Rabbi Elya ignored everybody, walked right up to the Rebbe’s door and knocked. When we entered, we found the Rebbe sitting behind a desk, studying a holy book.

“This is the young doctor I was telling you about,” Rabbi Elya said.

The Rebbe nodded and welcomed us in, inviting me to take a seat.

In the conversation that followed, it became clear that the Rebbe was interested to know what had motivated me to do something as radical as sleeping in the hospital at my father’s side for thirty days straight. “Were you there to pray?” he asked. “Were you there to supervise his care? Were you there for moral support?”

I answered him honestly. I said I was very fearful that my father was going to die and I needed to share certain things with him before he departed this world. In the minutes after his resuscitation, I asked G-d to please give our family just a short time to say goodbye properly. My prayers were answered; indeed, my father miraculously recovered. Once he was stable enough and discharged from Brooklyn Jewish to undergo rehabilitation at NYU Medical Center, I knew I had done everything I could.

Hearing that, the Rebbe remarked, “Most people spend a lifetime trying to figure out how to properly honor their parents, but you seem to have figured it out in a very short period of time.” Those were his words.

Then the Rebbe explained why I was able to meet with him privately although at that point he was seeing people in large groups only. “We have something in common,” he said.

I was puzzled. “What do we have in common?”

The Rebbe answered: “I myself wasn’t always able to properly fulfill the mitzvah of honoring my mother while she was alive. I couldn’t take her to every doctor’s visit and I couldn’t always go to the pharmacy for her, so Rabbi Elya did that on my behalf. He essentially helped me to fulfill my obligation to honor my mother in the way it was supposed to be fulfilled. And just like Rabbi Elya helped me do this mitzvah, he also helped you. This is the bond we have in common.”

And then he said something amazing: “If you ever want to come see me, you are welcome to.”

I took him up on his offer because there were certain things I had to discuss with him – big issues, life and death issues, as I was specializing in pediatrics and I couldn’t understand why G-d would strike down a small child. I was also struggling with the daily sight of so many children suffering from serious diseases and injuries. I needed the Rebbe’s help in understanding how, as a Torah-observant Jew, I was meant to relate to the questions that the suffering of those little innocents raised. I needed to know how to answer these questions when their families would ask. I needed to know whether I should continue my career as a pediatrician.

The Rebbe offered an insight into the meaning of suffering. “We should not see it as a bad thing,” he said. “Anything that is brought by G-d, is for the good, even if we don’t understand how.” His view was that we must have faith that the illness will eventually make sense, perhaps after a very long time, or only in the world to come. Only then will we come to know its intent – why it was necessary.

But the most important thing that he taught me is that anger at G-d or towards any human being destroys the Jewish people and it destroys the world. “If you are angry at G-d because of a diagnosis,” he said, “then you are hurting the chance that this child has for a miracle.”

“Anger should never be directed at G-d,” he stressed. “Be happy that you’ve been assigned this special role and given the opportunity to participate in the care of a sick child and in the miracle of healing.”