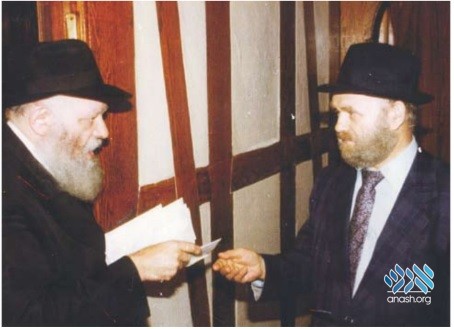 When his son, Reb Nochum reached yeshiva age, Reb Moshe Yitzchok sent young Nochum to Yeshiva Tomchei Tmimim in Otwock, Poland, under the auspices of the Frierdiker Rebbe. He had with him a warm recommendation letter from the Dayan, Reb Simcha Ziesel Rieger of Brisk. In Otwock, he formed a bond with friends who later went through so much together, never to be broken.

When WWII broke out, the Frierdiker Rebbe arranged visas for them, to leave Poland for Vilna. In Vilna, they established a Lubavitcher yeshiva. Reb Nochum’s parents, two younger brothers and most of his family perished in the Holocaust, with the exception of a small group of close relatives and his older brother, Yeshayahu Leib who lived in Israel.

From Vilna to the U.S.

One of his friends in yeshiva, Reb Shimon Goldman, recalled Reb Nochum’s appearance at the Vilna gathering place, which was also the location of the Lubavitch yeshiva. “Nochum was different from the other students in that his dress was respectable. Coming from his parent’s home, he was dressed properly. He came with a nice size suitcase and it was obvious that his parents looked after him. The other students from Otwock were wearing torn clothing and had just managed to escape from the Nazis. Nochum and I shared a room and became very close friends.”

After a short period of time, the Nazis advanced further. Reb Nochum and the other yeshiva students were forced to flee to Japan, where they stayed for six months. At that time, they were unable to obtain visas to the United States and remained in Shanghai until after WWII. The Rov of Shanghai, Reb Meir Ashkenazi was a Lubavitcher Chossid. He and his Rebbetzin were very dedicated to the Tmimim and their needs. They helped clothe and feed the bochurim, and later on, assisted a few newly married yungeleit to begin their new lives. One of Reb Nochum’s close friends, Rabbi Mordechai Bryski, a”h, recalled some of his projects in Shanghai with Reb Nochum. “In Shanghai, we did a couple of projects together. We organized a Chinese printing house to print Tanyas. We also published Kol Korehs and distributed them.”

After WWII, Reb Nochum was among three Tmimim who traveled to the U.S. by plane. The remaining bochurim came by ship and arrived shortly thereafter. They were all finally able to connect and see the Previous Rebbe. In 1946, when they eventually arrived in America, some of the bochurim went into business. Reb Nochum became quite successful. Thereafter, every day of his life, he was thankful to the Previous Rebbe for arranging the visa that enabled him to come to the U.S. In his first years in the U.S., Reb Nochum heard that the Previous Rebbe did not have air conditioning in his home, so he contributed a significant sum to purchase an air conditioner for the Rebbe.

Reb Nochum was known to be a pillar of chesed. He helped whoever he could in Shanghai and similarly continued in a greater measure, in the U.S. Everyone knew that if they needed a favor, they could ask Reb Nochum and without any hesitation or condition, they would receive the money they needed. In his humble manner, he helped many Yidden without publicizing or making a point of his actions. Reb Nochum excelled in the mitzvah of Tzedoko in the form of matan b’seiser, contributing anonymously. He also did not differentiate between those who came to him.

After Reb Nochum’s ptira, letters of consolation were sent to family members. Mrs. Zelda Nemes, a prominent educator, wrote to Mrs. Preger. “Your tragedy is not only a tragedy for your family but a tragedy for all of Mosdos Chabad and all of Anash. Indeed, it was a loss of a true friend who accomplished many things and who was a very generous person. And perhaps, who as you, knows how every day of his life was utilized for the benefit of Klal Yisroel?! And who like you, saw the pride and satisfaction that he had in his public communal affairs and in his private life’s activities.”

A remedy for a thyroid problem

In the early 1950’s, Reb Nochum suffered from a persistent thyroid problem. When he consulted the Rebbe, he suggested that Reb Nochum visit the pharmacy and request a list of different ingredients, including what the pharmacist referred to as an ”odd ingredient.” When Reb Nochum filled the prescription, he never suffered from the thyroid again.

A shidduch was soon proposed with Miss Tova Abramowitz, whose parents’ families had lived in Yerushalayim and Chevron respectively, for six generations. Before Reb Nochum traveled to Eretz Yisrael to meet her, he went into Yechidus with the Rebbe. He told the Rebbe that he wanted to donate money to a mosad. The Rebbe said, “Bei Mir iz Uforatzto,” for me it’s Uforatzto. He instructed Reb Nochum to give $1,000, a huge sum of money, yet Reb Nochum gave without hesitation. The Rebbe then encouraged him to get married and he met his wife in Israel. After their wedding, the couple returned to New York and raised a chassidishe family. As he progressed in life so did his acts of Tzedokoh and support of Torah and Chesed institutions. Here are a few examples:

In 5725/1965, Yeshiva Hadar Hatorah was founded for men who had no background in Jewish education. There was a desperate need for funding to establish and maintain the yeshiva. Reb Nochum was one of the few that Rabbi Yisroel Jacobson, rosh Hayeshiva, was able to rely on and was always available to be called upon.

During the Acharon Shel Pesach Farbrengen in 5729/1969, the Rebbe initiated a campaign to strengthen the shechuna of Crown Heights. The Rebbe spoke on this topic steadily and encouraged the community leaders in their work. The organization CHEBRA, which later developed into the Community Council, was created. Reb Nochum was on the list of CHEBRA’S founders and continued to work within the organization to build the shechuna.

In addition to his involvement in the local mosdos, Reb Nochum extended his support to shluchim working in various cities. This became evident when a number of mosdos had published nichum aveilim announcements after his ptira.

In the early 5730’s/1970’s, F.R.E.E., Friends of Refugees of Eastern Europe, was established to assist the Yidden who had arrived from Russia. Reb Nochum contributed to this vital mosad.

In the spring of 5736/1976, the Rebbe initiated the Shnas Hachinuch Campaign, in which the Rebbe urged everyone to participate in registering Jewish children in yeshiva. Rabbi Yaakov Bryski then founded the Yeshivas Chanoch Le’naar for young boys who had little Jewish education. He told one of Reb Nochum’s grandchildren: “Without your zayde, I would never have been able to open the Yeshiva Chanoch Le’naar. He was the backbone of the Yeshiva all the years that he was alive.”

The Rebbe had given specific directives to Rabbi Bryski regarding the establishment of the Yeshiva Chanoch Le’naar. The yeshiva should have a board who would handle the financial concerns. Reb Nochum was chosen to head the board, and he helped Rabbi Bryski select additional members of the board. Reb Nochum would accompany him to collect money or raise funds for the Yeshiva. Anyone who saw Reb Nochum would give a generous donation.

Chai Elul was the day the yeshiva opened with a total of 18 students. Rabbi Bryski brought the students to the Rebbe’s Farbrengen. He told the Rebbe’s secretary that he wanted to present the Rebbe with a golden key. The secretary told him that presentations are made only during the Yud-Alef Nissan Farbrengen. When Rabbi Bryski asked the secretary to ask the Rebbe, if they could make the presentation on that day, Chai Elul, the Rebbe agreed. Reb Nochum presented the Rebbe with a golden key. The Rebbe told him that whatever sum he had given thus far to Chanoch Le’naar, he should double it.

The last years of his short life were dedicated exclusively to Tzedoko. He became involved in the Lubavitch girls’ school, Bais Rivka, among the other institutions which he helped. He assisted in securing the purchase of the Lefferts General Hospital. The task of converting a hospital to a school was enormous. Reb Nochum received great encouragement from the Rebbe, although the faculty of the school at that time felt somewhat overwhelmed by the difficult challenge. Day and night he spoke to people and rallied support for the project.

Finally, a dinner was planned to publicize the purchase and the eventual conversion of the hospital to a school. Several days before the highly successful dinner, Reb Nochum suffered a heart attack. He never made it to the dinner. His friends continued his hard work and today a beautiful, new building stands on the corner of Brooklyn and Lefferts Avenues, with more than 2000 students.

Every Thursday evening, Rabbi Sholom Mendel Simpson, one of the Rebbe’s secretaries, would enter the Rebbe’s room to relay the letters that needed to be signed. Once, when he entered the Rebbe’s room, the Rebbe asked him, “What is happening with your daughter and Moshe Yitzchok [Reb Nochum’s son], in regards to a shidduch.” Rabbi Simpson told the Rebbe that at the present, his daughter was a counselor in a camp in Vancouver, and Moshe Yitzchok was working in New York. The Rebbe said, “She should come in tomorrow (Friday) and they should write in on Sunday [asking for a bracha] to be engaged.”

Although the Rebbe did not usually answer letters on the fast day of 17th of Tamuz, in this case, the Rebbe answered their letter with a brochoh, approving the shidduch. The Rebbe set the wedding date for the month of Elul. It became evident after Reb Menachem Nochum was nifter on the 21st of Tammuz that the Rebbe had rushed the engagement so that Reb Nochum would be able to partake in this joyous event.

At the Shabbos Farbrengen following the petira, the Rebbe spoke a Sicha which seemingly referred to Reb Nochum. In Parshas Ki Seitzei (21:22), it is stated, “וכי יהי’ באיש חטא משפט מוות והומת, ותלית אותו על העץ.” The Rebbe noted that the Arizal explained this posuk as so: The word “cheit” also means lacking. If it was a case of “cheit mish’pat maves vehumas,” there was no reason why one was judged to be nifter, for he had done no wrong, the reason must then be, “vesolisa oiso al haeitz’ – you should relate it to the eitz hada’as, which brought death to the world. When Rabbi Yosef Weinberg reviewed this Farbrengen on Motzoei Shabbos for his radio listeners, he commented that it was obvious that the Rebbe was referring to Reb Nochum.

Reb Nochum left behind a beautiful family, as well as various mosdos that carry his name with honor. This includes the Bais Menachem Nochum Shul in Crown Heights.