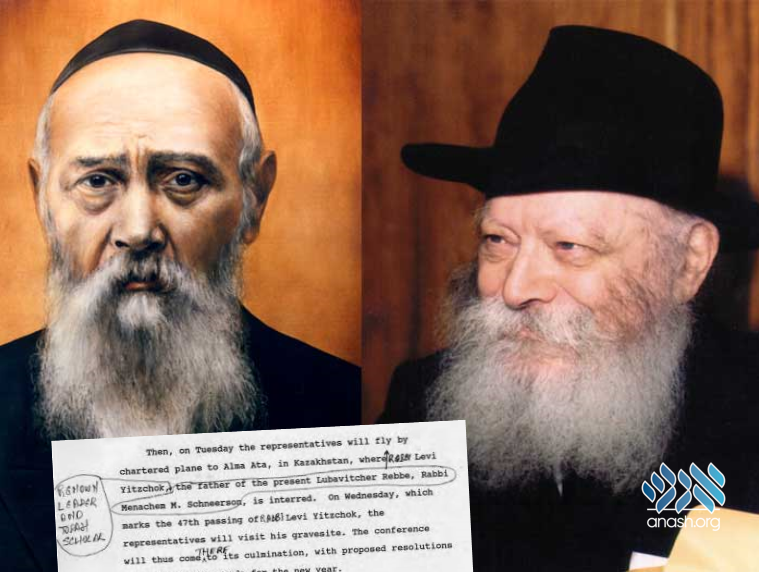 In honor of the 75th hilula of Harav Levi Yitzchok, Anash.org is proud to present a handwritten edit of the Rebbe about Reb Levik, where we can see the Rebbe’s great respect for his father.

In 5751/1991, soon after the fall of the Soviet Union, the European Regional Kinnus Hashluchim was held in Moscow.  A few days before the start of the Kinnus, as the final preparations were taking place, Lubavitch News Service prepared a press release to publicize the event, a huge novelty at the time.

The press release contained details of the itinerary of the Shluchim. They would be visiting the town of Lubavitch, joining the Yeshiva in Moscow for Shabbos, as well as visiting the Ohel of Reb Levik in Alma Ata on Chof Av.

The press release was handed in to the Rebbe before publication, as was the case with all releases from LNS. The Rebbe edited a few details, but we will focusing on one particular edit.

In the paragraph describing the planned visit to Reb Levik’s Ohel, the following was written:

“Then on Tuesday the representatives will fly by chartered plane to Alma Ata, in Kazakhstan, where Rabbi Levi Yitzchok, the father of the Lubavitcher Rebbe, Rabbi Menachem M. Schneerson, is interred.”

The Rebbe circled the words “the father of the Lubavitcher Rebbe, Rabbi Menachem M. Schneerson” as an indication to substitute those words, and he wrote “Renown leader and Torah scholar” in its place. It seems that the Rebbe did not want the focus to be on Reb Levik being his father, but rather on the fact that Reb Levik himself was a leader and talmid chochom.

One of our readers drew to our attention to the fact that this edit, which might seem minor, is in fact rooted in halacha.

In Shulchan Aruch Yore Deah, Siman 240, the Mechaber (R. Yosef Caro) writes “If you need a favor from the townsmen and you know they will grant your wish for your father’s sake, even though you know that they would also do it for your sake, you should not say, ‘Do it for my sake,’ but rather, ‘Do it for me for my father’s sake,’ in order to attribute the honor to your father.”

In other words, if one’s father requires a favor, the son should not request the favor to be done for himself. He should instead ask for it to be done for his father. For if he were to ask to himself, it would result in others only helping the father for the son’s sake. This would constitute a lack in ‘kibbud av.’

The Shach (Sifsei Kohen) on the above halacha brings the opinion of Rabbeinu Yerucham who takes it a step further. According to his opinion, even if the townsmen don’t have any reason to honor the father, the son should still request the favor for his father. Since the townsmen respect the son, the favor will be done regardless, and by asking for his father, he is according respect to him.

What we can infer from the above, that even when a son knows that his father is not honored, the son should nonetheless do his utmost that his father should be honored, even though the honor is in the son’s merit

All the more so in our case, where the father being discussed, Reb Levik, was in his own right a Rov, fearless leader, tzaddik and gaon. The Rebbe did not want Reb Levik honored in order to give his son, the Rebbe, gratification. Instead the Rebbe wanted his father to be honored on his own merits.

UPDATE: Several readers have pointed out that the English corrections on the press release are not the Rebbe’s handwriting (compare to the edits in Lashon Kodesh). Nevertheless, it is quite likely that this edit was made at the Rebbe’s instructions (since there is nothing lacking in the original text that it should have been corrected).